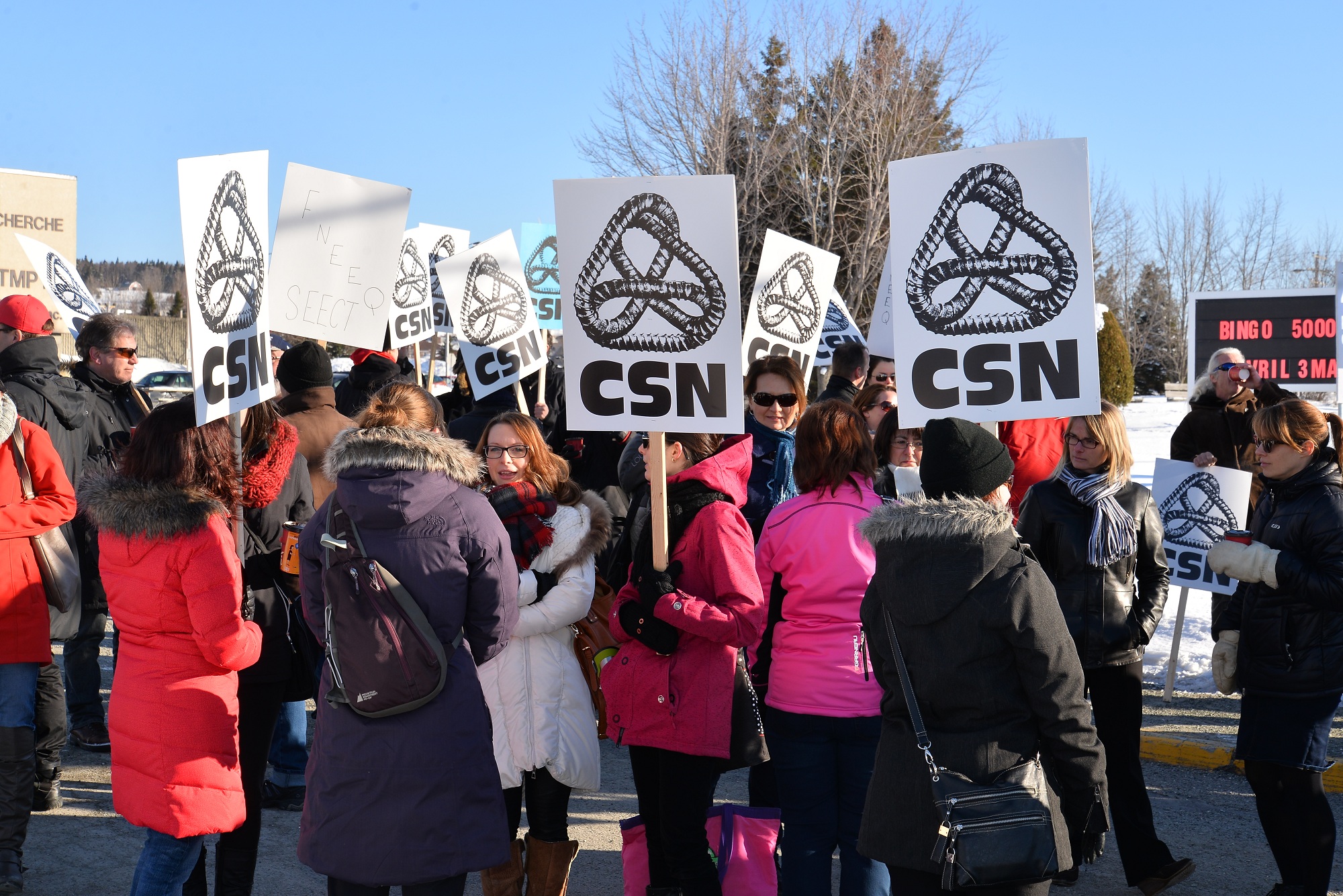 Following a blitz of negotiations just before the holidays, workers received what seemed to be good news. On December 19th the leaders of the Common Front (representing more than 400,000 public sector employees) announced that they had forced the government to back down and had reached an agreement. CSN president Jacques Létourneau stated that they had “stopped the impoverishment of public sector workers and had ended the lag in salaries.” The supposed achievement according to Mr. Létourneau is a salary increase of 10.25 per cent over five years which is up from the initial governmental proposition of 3 per cent over five years. Many workers have now returned to work after the holidays with the unpleasant news that the proposed deal is not all that it is claimed to be.

In the same initial declaration, Létourneau claimed that they had “forced the government out of its initial financial framework.” Contradicting this, the president of the Treasury Board, Martin Coiteux, welcomed the agreement on the grounds that it “respects the budgetary constraints.” Let us take a minute to cut through these confusing and contradictory declarations to see what this agreement really amounts to. Who really won this contest?

Erosion of real wages will continue

“Overall, we are talking about a package of 10.25 per cent in five years, it’s not nothing!” is how Létourneau glowingly described the deal that was made. Even if this were true, this isn’t exactly something to brag about. The government of Quebec is predicting an inflation rate of 2.1 per cent for next year. This means that even if the agreement in salaries was the suggested 10.25 per cent over five years, workers would still be losing purchasing power as the cost of living will likely be increasing at a greater rate than their salaries. This as well does not even take into account the various myriad of cuts to social services, the rising costs of healthcare and post-secondary education, and cuts to pensions. All of these things are constantly eating away at the living standards of workers in the province.

So where does the 10.25 per cent come from? The government’s initial proposal contained a two year wage freeze. This will remain. For the first and last year of the deal, salaries of public sector employees will be frozen. In its place the government has offered lump-sum payments of $500 for the first year and $250 for the fifth year for each employee. The union leaders are lumping in these lump sum payments with the salary increases in order to make the final number look more attractive to their members. Calling this a salary increase is not only incorrect but it is intentionally deceptive. A salary increase is cumulative and benefits the workers not only that year but each following year and adds to the salaries of any new workers hired in the future. On top of this, a lump sum payment comes as a smack in the face to workers who have already lost hundreds of dollars in pay while on strike. It does not represent the government giving anything extra but simply returning to the workers what they lost while being on strike. In years two through four, the agreed upon salary increases will be 1.5, 1.75 and 2 per cent respectively. Through some weird twist of logic, Létourneau has even been so bold as to say that this agreement will somehow allow salaries to “catch-up,” as the previous agreement led to a deterioration in real wages.

Another factor that gives us the 10.25 per cent number is what is being called “salary relativity.” Basically this is a series of negotiations that have been going on for a few years and revolve around getting rid of some of the 150 different pay grades in the public sector and equalizing the pay between workers in similar positions. The unions wanted to make sure that the government was not using this as a pretext to lower the wages of workers by downgrading them on the pay scale. The conclusion of the salary relativity negotiations is that 90 per cent of all public sector workers will be bumped up a pay grade with the average raise being 2.4 per cent. These negotiations have been going on for a few years and are actually completely separate from the Common From negotiations. You can see this by looking at a communique released by the FSSS in 2014 which clearly shows that that the negotiations surrounding salary relativity have been continuing for years and are not part of Common Front salary negotiations. This was supposed to be finalized before the Common Front collective bargaining began. It is therefore dishonest for Common Front leaders to take this amount and then claim it as part of the salary augmentations won during their negotiations. The government intentionally delayed the salary relativity negotiations for years in order to confuse the Common Front negotiations and offer less on salary amounts. They are giving the impression that they have forced the government to move further than they actually have. Even if you do include the salary relativity amounts in the final amount, we are still presented with an amount that still does not keep pace with inflation and therefore leads to further erosion of the real wages of the workers.

The simple fact is that the salary increases negotiated in this deal amount to only 5.25 per cent over five years. This is to be compared to the Common Front’s initial demand of 13.5 per cent over three years. In other words, the government managed to force the union leaders to retreat from 4.5 per cent/year down to just 1.05 per cent/year. This is a huge capitulation when we take into consideration that this agreement is actually less than the deal which Jean Charest forced upon the public sector workers in 2005 with back to work legislation. As we previously analyzed, the Common Front leaders through their own action or inaction demonstrated over the course of the strike that they were looking for a way to justify ending the movement. This was demonstrated when they canceled the three-day province wide public sector strike in early December and lowered their initial demands in spite of not receiving any indication that the government was prepared to make any compromises. Instead of bluntly telling their members what the deal really involves, the leaders have been intentionally misrepresenting the facts so that they can justify ending the movement and attempt to save face.

We are looking at an agreement where workers’ real wages will continue to fall and the retirement age will be raised to sixty-one. If we take these together, then it seems impossible to consider this deal a victory for the workers. This deal is clearly a net loss for the workers.

The wave of public sector strikes and demonstrations this past fall has been called “historic” by the leaders of the Common Front. It is true that not since the 1970s have we seen this number of workers on strike at one time. In one day, strike pickets had shutdown government buildings, primary and secondary schools and colleges all over the province. The explosion of small demonstrations and actions organized by the workers in combination with mass demonstrations organized by the unions shows the desire of the workers to fight against the austerity of the government.

This movement has great potential to be a historic movement. It can serve as a rallying cry for all sectors of society looking to fight against the injustice of this capitalist government whose real interests were demonstrated conclusively when they easily found enough money to provide $1.3 billion to the private aerospace manufacturer Bombardier and raise the salaries of members of the National Assembly by 31 per cent. But if this is movement is really “historic” then why stop the mobilizations with such a compromised deal which “respects the budgetary constraints” of Coiteux’s austerity budget?

Luckily, workers are starting to see through the confusing deceptions of the Common Front leaders and many workers are preparing to vote against this capitulation. 600 delegates from the FSSS-CSN are recommending that their 110,000 members reject the deal. As well, the FAE (34,000 teachers) while not officially a part of the Common Front are calling on their members to reject a similar deal. This movement to reject the deal needs to be expanded and deepened into every union to mobilize members against this deal, and in particular against austerity. The struggle must be continued until a real victory is achieved and the government is forced to actually back down on its austerity agenda.