Public education under attack: Strike to fight back! 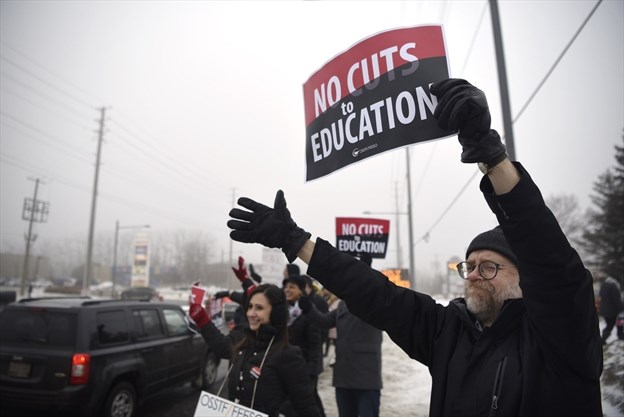 Public education in Ontario is under attack by the Doug Ford Conservatives.

On Friday, March 15th Education Minister Lisa Thompson announced increases to intermediate and high school class sizes. While class sizes will remain the same from kindergarten to Grade 3, Grades 4-8 will increase by one student per classroom—from a current 23 students to 24. Grades 9 to 12 will see an average increase of 6 students per classroom, going from 22 up to 28. However, because these are averages, many high school classes are already well into the 30s, which offsets smaller specialized classes. This means that high school classrooms could very well reach the 40s.

While Thompson told reporters that, “Not one teacher—not one—will lose their job because of our class size strategy,” there is no reason to believe this is true. Doug Ford has already backed away from his campaign promise that no public sector workers would lose their job under his government, saying this now only applies to undefined “front-line” workers. Already, 40 nurses are being laid off at the Grand River Hospital in Kitchener (and if nurses aren’t frontline workers then we don’t know who is!), and the closure of the Thunder Bay office of the Child and Youth Advocate will result in an undetermined number of job losses. The Toronto District School Board has also already announced impending layoffs as a result of a $25 million cut to specialized education programs announced before the class increases.

As a result of class size increases, Harvey Bischof, president of the Ontario Secondary School Teachers’ Federation (OSSTF), has stated that 5,700 jobs in English public high schools alone will be impacted. Across all school boards, approximately 10,000 teaching positions are expected to be eliminated over four years. Bischof is quoted by the CBC saying “It’s a sledgehammer blow to the education system in Ontario” and that is precisely what it is.

The increase in class sizes is not only an attack on teachers and jobs, but also on students. Educators have highlighted that students’ education will suffer as a result of bigger class sizes. Some problems that have been raised are the increased difficulty of classroom management that comes with larger class sizes, and that teachers will be able to pay less individual attention to each student. This will especially impact students with learning challenges and higher needs.

In response to educators’ concerns about the impact the class increases will have on students, Education Minister Lisa Thompson brazenly claimed that larger class sizes would build students’ “resiliency” and prepare them for the “reality of post-secondary, as well as the world of work”. There is simply no evidence that larger class sizes build “resiliency”, a claim that only adds insult to injury and ignores the expertise of teachers across the province.

Students have begun mobilizing against these attacks. On Thursday, April 4th tens of thousands of students from over 800 elementary schools and high schools across the province are participating in a province wide walk-out to protest the funding cuts and increased class room sizes, as well as several other changes to the education system being implemented by the Ford government. This is the second province-wide action this academic year. In September 2018, an estimated 38,000 students from 75 high schools walked out to protest Ford’s repeal of the 2015 sex-ed curriculum. This demonstrates a growing political awareness and anger among the youth, who increasingly see no future for themselves under capitalism. The labour movement should take inspiration from these students and organize mass resistance to Ford’s attacks.

Already, a “rally for education” has been organized by the OSSTF, Elementary Teachers’ Federation of Ontario and CUPE, at Queen’s Park in Toronto for Saturday, April 6th, with thousands expected to attend. This is a good first step in building momentum toward escalating actions and labour stoppages. The high school teachers’ contracts are set to expire this August and local classroom sizes are negotiated through the collective bargaining process. OSSTF president Harvey Bischof has warned that his members will not concede to bigger class sizes in their local agreements, even suggesting that there could be “disruptions”. This must be followed through with.

Ford has already declared, “If the head of the unions want to hurt the children of this province by doing walkouts and everything else, I’d think twice if I were them.” Clearly, there is no way to reason with this government, much like with the Liberals before them. Ford’s goal is not to bargain fairly with teachers, but to milk the education system dry, freeing up more money for his corporate paymasters who really call the shots. Like any bully, the only language Ford understands is that of force—and it’s about time we start speaking his language.

A powerful movement is brewing at all levels of the education system. The school walkouts, already some of the largest demonstrations in years, are only the beginning. Ford has declared war on our schools, and the students have responded in kind. However, Ford is not yet afraid. The power of students may be mighty, but the power of teachers on strike is even mightier. Students may be able to shut down their schools, but workers on strike can shut down the entire province. To do this, the teacher’s unions only need a little push—and the students are happy to provide it.

Ford, short sighted as he is, may not be afraid now. However, faced with a united strike of teachers and students, that can change very quickly. Such a movement could inspire other workers suffering under Ford to join them, making it all the more powerful. Together, we can not only shut down Ontario, but bring down Ford and the crooked capitalist system he represents.

Solidarity with teachers and students!

Strike to bring down Ford!