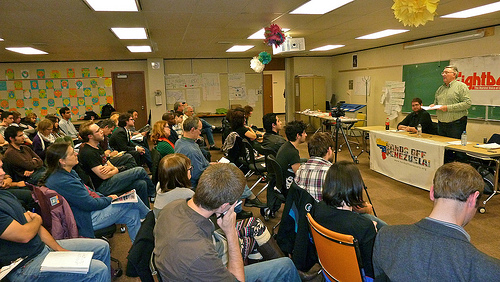 Over 100 enthusiastic participants turned out on Saturday evening for the third event featuring In Defence of Marxism editor, Alan Woods, on his current North American speaking tour.  Held at the Ontario Institute for Studies in Education (OISE) at the University of Toronto, they were eager to listen to Alan speak on the prospects for revolution in the advanced capitalist countries, particularly in Europe and North America.

The effects of the crisis are hard to deny — despite some of the best attempts by bourgeois thinkers.  Over four years since the so-called “Great Recession” began, there is no evidence that the situation is set to get any better for the working class and youth of the world.

Alan mentioned that a couple of weeks prior to this event, he had spoken at a meeting at Cambridge University in the UK where one well-learned lady tried to assert that the working class did not even exist anymore!  Ever since Marx and Engels sat down to write the Communist Manifesto over 160 years ago, the bourgeois have attempted to dismiss Marxist ideas as irrelevant, and insisting that Marxism was dead.  Alan joked, “They gave up Jesus after just three days; why do they feel the need to continue attacking Marxism then?”  The fact remains that Marxism is the only set of ideas that properly explains the crisis and, most importantly, shows a clear way out of the capitalist crisis.

From the beginning, Marx and Engels understood that built into the capitalist system is the crisis of overproduction.  Even the most far-sighted bourgeois economists acknowledge this crisis and how it has brought the capitalist system into extreme crisis at the present time.  However, for fears of giving Marxism any sort of credit into understanding the nature of the crisis, they insist on calling it “excess capacity” in the economy.  Regardless of what term you may want to use, the fact is that there are too many goods on the world market to satisfy demand at point where the capitalists can ensure a sufficient profit.  Alan cited one stat that showed that excess capacity in the auto sector currently stands at over 30% on a world scale; what this number means is that the bosses would need to eliminate one-third of the auto industry worldwide to be able to restore a minimum degree of profitability to the system! 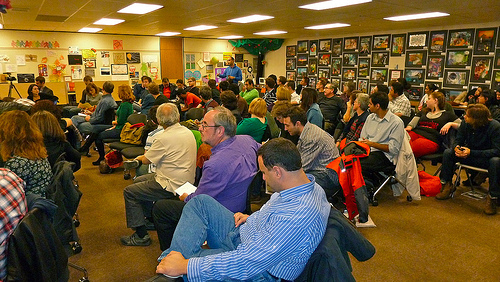 What is also necessary to understand about this crisis is that it is global in scale.  And, just as the crisis is global, so is the resistance to it.  Alan talked at length about the spread of the Arab revolutions of 2011 and how they directly influenced movements in the advanced capitalist countries — from the indignado movement in Spain to the references to the Egyptian revolution in the mass mobilization in Wisconsin and Wall Street in the USA.

The notion that the US working class is too “reactionary” for it to reach revolutionary conclusions has no basis in reality or history.  Alan cited the example of how at the turn of the 20th-century, the same had been said of the Russian working class — the same working class who eventually overthrew the Tsarist regime in 1917!  The fact was that it has become very clear that there is a mass change in consciousness underway in the USA.  Increasingly, US workers are coming to the conclusion that there is very hope of the “American dream” ever coming true for them.  This is evidenced by the mass movements that erupted in the USA last year, and which only (temporarily) faded because of a lack of direction and leadership as to how to proceed.  In Wisconsin, the police even tacked on signs reading, “Cops 4 Labour”!  As Alan exclaimed, Wisconsin is not supposed to be Petrograd!

But, it is inevitable that the crisis’ effects would begin to transform workers’ consciousness.  Only the most crass of “Leftists” assume that workers want to fight the system.  The real fact of the matter is that humans generally dislike change, and try to avoid it as much as possible.  This explains why in much of the world (particularly in the advanced capitalist countries), it has taken several years for the working class to begin the fight back against capitalist austerity.  At a certain point, there are not enough sacrifices that workers can continue to make to try to preserve their present standard of living and they have no choice but to move onto the political plane to effect change.  This is precisely what has begun in Greece, Spain, and Portugal, and which will certainly explode in countries like France, the UK, the USA, and even Canada.

Alan’s emphasis at the end of his presentation, and a theme that was brought up repeatedly during the subsequent discussion, is how to channel the seething mass of anger, frustration, and indignation that is present throughout society.  Alan brought up the power that is possessed by the working class in capitalist society — not one wheel turns, not one light is lit without the behest of the working class.  But, the power of the working class is a potential power; it needs to be concentrated and harnessed for it to truly exercise itself.  Alan gave the analogy of working class power resembling the power held by steam, which truly becomes a power through a piston box.

What is needed now, more than ever, is a vehicle that can channel, direct, and give a political voice to the mass discontent held by youth and the working class around the world.  But, it is also not enough to just have an entire myriad of “revolutionary parties” that consist of three lonely individuals.  What is needed is the building of a mass revolutionary party that has the ear of the working class.  This is the challenge facing the Marxists in the current period. 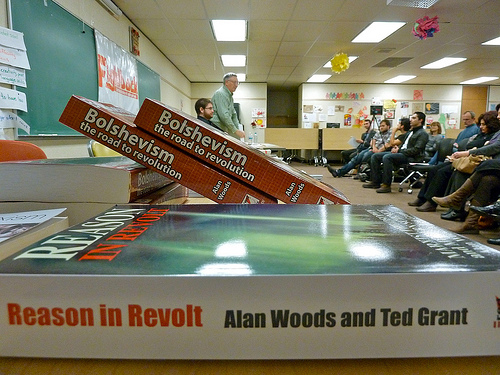 A couple participants also brought up the question of reaction, especially in light of the rise of the Golden Dawn in Greece.  Alan explained that although Marxists cannot ignore the dangers posed by these hooligans and criminals, it is also necessary to not exaggerate their strength.  Alan emphasized that the clear trend in Europe is society moving to the left.  In Greece, for instance, the left-wing party SYRIZA tops the polls and is currently pulling three times the support that the Golden Dawn has.  The basis for reaction in the advanced capitalist countries has been significantly weakened, especially when compared to fascism’s heights in the 1920s and 1930s.  Even the traditional bastions that fascism depended upon now look to the left.  Students, teachers, civil servants — these sectors are now some of the most radical in Europe and most determined to fight capitalist austerity!

Alan’s talk gave a great energy to the audience who participated enthusiastically during the discussion.  Many also approached Fightback’s literature table to purchase copies of Alan’s books and have the chance to have it signed by the author.  Despite the fact the event ran long into the Saturday evening, several dozen proceeded to a local pub to continue the discussions on how to continue and organize the fight against capitalism.

After the success of the three events in Toronto, the speaking tour now moves on to Ottawa and Montreal, before the tour heads to a number of engagements in the United States.  Those interested in the tour and who could not attend the events can follow the tour by following #AlanWoods2012 on Twitter.