Netanyahu’s victory: What does it mean? 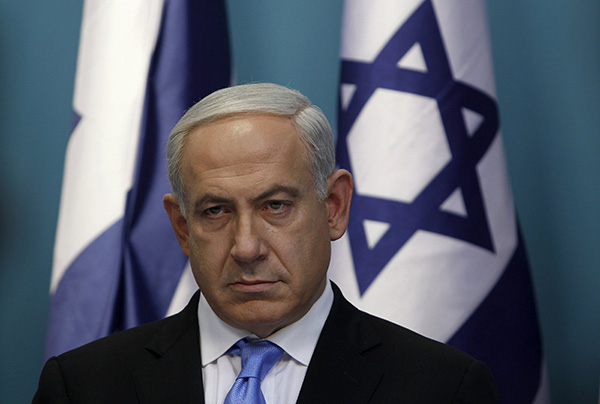 With a defiant right-wing turn promising that no Palestinian state would be established as long as he remained in power, Israeli prime minister Netanyahu has managed to overturn unfavourable opinion polls at the last minute and emerge as the winner of the Israeli elections on Tuesday. His appeal was aimed — and successfully so — at rallying the right wing around his figure and “firm” leadership by appealing once again to the historically deeply rooted fears of ordinary Israeli citizens over external threats to Israel. What are going to be the consequences of his victory within Israel and internationally?

Netanyahu’s electoral success represented such a sharp turn in the situation that has taken all analysts by surprise, as well as his opponents. It was mainly due to a swing in votes from the extreme right wing public opinion towards Netanyahu’s party, Likud, which came out on top in the polls, gaining about 30 seats (the final results will be released later on) in the 120-strong Knesset. This victory undoubtedly gives Netanyahu a new lease of life, and has important internal and international consequences that need to be carefully analysed.

By looking superficially at the election results one may conclude that Netanyahu managed to cut across – at least on the electoral plane – a general process of radicalisation to the left and an anti-establishment mood which was gaining momentum in the run up of the elections. This mood has affected large sections of the youth and of Israeli society in general over the past few years, especially after the 2011 mass movements. Such a sharp turn in the situation was unexpected but should not surprise Marxists in the least. Sudden twists and turns in the political situation are indeed a feature of all periods characterised by a deep crisis of the dominant system, like the one we have entered worldwide since 2008.

Every crisis polarises society in different directions: in the direction of a radical questioning of the system and revolution on the one hand, and of a mobilisation of reactionary forces, on the other. This process is inevitable, as the opposing camps are rallying their forces by drawing in previously inert layers of society for future decisive battles. The rise of one side does not exclude the other. On the contrary, it arouses countering forces. Political volatility is a feature of epochs of crisis such as the one we have entered on a world scale.

In this case, we can clearly see that Netanyahu’s victory will temporarily revive his position as the natural arbiter between different factions of the Israeli ruling class. In addition, he will gain more leverage in the international arena, in increasingly complicated relations with the US. But this respite is going to be a short-lived detour from the march of events.

In fact, the relative freedom from internal and international constraints Netanyahu is going to enjoy for a short period after his victory may also help to accelerate the process of radicalisation within Israeli society, in circumstances where deep social processes are at work. At the same time, a “stronger” Netanyahu introduces an additional element of unpredictability into the already extremely unstable situation in Israel and wider relations in the Middle East.

The extent of such unpredictability is reflected in a post-election comment by theNew York Times:

“Despite the resounding victory after Mr. Netanyahu’s hard-line statements in the campaign’s final days, the direction he will take in what would be his fourth term is as much a mystery as the man himself”.

Social polarisation and the future

The increasing political volatility has roots in the objective situation. Government statistics released at the beginning of March underline the scale of the social problems facing Israel and the growing divide between rich and poor, but also how hard the crisis is hitting even the middle layers. According to the central bureau of statistics, 41% of Israelis are in a constant state of overdraft with more than a third owing at least 10,000 shekels ($2,500). What is the reason for this? A recent report from the state comptroller shows that house prices have rocketed in the last six years by almost 55% and rents by 30%. Wages, however, have remained largely stagnant over the same period.

Will Netanyahu be able – or even willing – to address these problems? Rhetoric about a “Jewish State”, resorting to a boost in Jewish-only settlements (grown by 23 percent between 2009 and 2014) and an aggressive foreign policy cannot compensate for the fact that Netanyahu’s policies over the past two years have been locked to austerity and cuts to social welfare. This, to such an extent that his partner in the coalition (and one of the most popular figures back in 2013), finance minister Yair Lapid, saw his personal support sink and the votes for his party Yesh Atid and seats almost halved in the current election.

Netanyahu’s victory bears one consequence more serious than any other. The growing discontent is rooted in the worsening of the material conditions of living for large layers of Israeli society. However, the way it has expressed itself has changed over the past period. The present results show that this movement has not yet gained enough momentum to sweep across the political scene by electoral means. However, we need to understand that, with the possibility to change things by electoral means obstructed for a period, the bulk of the Israeli population will at some point – like in 2011 – be forced to express itself through social unrest and class struggle. But this time the movement will acquire – in a much quicker way – an anti-establishment character and will be more consciously political.

The rise to prominence within the Labour Party (the leading force of the second biggest front, the Zionist Union coalition) of a few left personalities such as the 29-years old Stav Shaffir, personally linked to the 2011 movement, should not be underestimated as a symptom of the radicalisation taking place. Had the Labour Party won the election, this process would have been delayed or even blocked, but the most likely scenario is one of the LP being relegated for a while as a “loyal opposition” to the government, which may give some scope for internal differentiation to continue.

However, the principal symptom of a radical mood emerging in important sections of the youth and workers in Israel, especially but not only within the Arab minority, is the rise of the Joint List led by the left wing Hadash’s new leader Aymen Odeh. Odeh’s denunciation of the present state – “This is a state of the tycoons against all the disadvantaged in the country” – struck a chord among a section of the masses and rallied new support to the left coalition. The Joint List scored more than 10 percent, coming third in the polls. Hadash and the Joint List may well emerge in the new Knesset as the main opposition pole in the next period. It is drawing support among the Israeli Arab workers and poor as well as their Jewish counterparts. Furthermore, an important section of the Labour Party’s leadership may choose at some point to support Netanyahu in a coalition, as Ehud Barak already did in the previous government.

A difficult and strained relationship with US imperialism

Netanyahu’s victory will determine a cosmetic change in US dealings with Israel in order to smoothen relations. Several incidents, such as Netanyahu’s visit to the United States to speak to Congress on 3rd March having been invited by the Republican Speaker of the House of Representatives, have upset the Obama administration. But US-Israel tensions are not determined by a clash of personalities between Obama and Netanyahu, but by the increasingly divergent strategic interests of US imperialism and what is traditionally its closest ally in the Middle East.

“Speeches aside, there is no question that U.S.-Israeli relations have been changing substantially since the end of the Cold War, and that change, arrested for a while after 9/11, has created distance and tension between the countries. Netanyahu’s speech is merely a symptom of the underlying reality. There are theatrics, there are personal animosities, but presidents and prime ministers come and go. What is important are the interests that bind or separate nations, and the interests of Israel and the United States have to some extent diverged.” (Stratfor, Netanyahu, Obama and the Geopolitics of Speeches, March 3, 2015)

These tensions are the consequence of the weakening of the power of US imperialism in the region, which gave more scope for regional powers (the main ones being Turkey, Iran, Saudi Arabia and Israel) to play their own game. US and Israeli interests have often diverged in the past, but what is emerging is a more serious cause of strain. The need for the American state to disengage from direct involvement in the area means that it necessarily finds itself more and more on the same side of the barricades as its long-standing foe: Iran, in the war against ISIS both in Iraq and in Syria.

From Israel’s point of view the growing influence of Iran represents a critical threat to their own existence and has pushed Netanyahu to the paradox of regarding the forces related to Al-Qaeda in Syria as the lesser evil. Netanyahu’s personal unpredictability enters the equation here, and had convinced the US administration to move against him significantly during the election campaign. But as the crisis in Israel develops, it can and will convert itself into a source of further instability in the Middle East.

Israeli capitalism is stumbling from one crisis to another and demonstrates that there is now no stable regime in the whole of the Middle East. Each turn in Israel’s internal situation will affect the government’s foreign policy, and, likewise, changes in international relations will accelerate the course of events within the country, in a spiral which may well get beyond Netanyahu’s control.