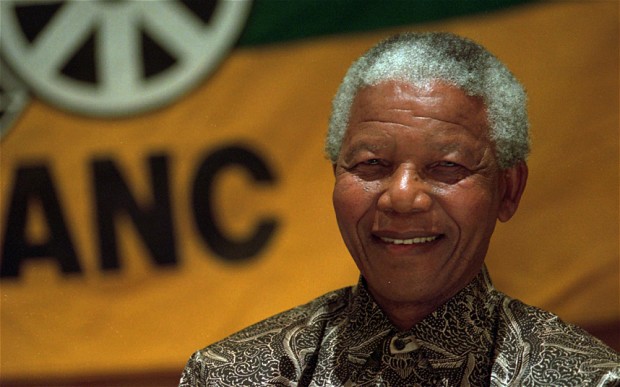 Nelson Mandela is no more. At about 8:50pm on Thursday, 5 December, Nelson Rohishlahla Mandela passed away peacefully after a long illness. The news was announced by President Jacob Zuma to a worldwide audience. He was 95 years old.

All across the country people gathered to pay tribute to a freedom fighter. In Soweto residents gathered in the streets where Mandela once lived to mourn his death and celebrate his life. The national flag will be flying at half-mast until his funeral.

Nelson Mandela was a great political and historical figure. He was one of the major leaders of the anti-Apartheid struggle and a fighter against the monstrous Apartheid regime. For this reason he was imprisoned for life by the former Apartheid state.

At the time he was hated by the South African bourgeoisie and its Nationalist government who branded him a “terrorist”, as did the likes of Margaret Thatcher and Ronald Reagan. He was vilified by the British Young Tories who produced the famous “Hang Mandela” poster in the 1980s. Today’s British prime minister, David Cameron, as a young 23-year-old, made a trip to South Africa in 1989 while Mandela was still in prison, on a so-called “fact-finding mission” funded by Strategy Network International (SNI), a body that had been specifically set up to lobby against sanctions imposed on the Apartheid regime. It was also reported at the time to have good relations with then South African president PW Botha. When Mandela was rotting in prison he was vilified by these people and now they shed crocodile tears.

However, while the ruling classes hated him, Mandela’s commitment to fight the Apartheid regime and his willingness to sacrifice his freedom for 27 years behind the bars of a prison cell have endeared him to the working masses of South Africa. It was during his imprisonment that Mandela contracted a lung disease which would affect his health to the end of his life.

During his time in jail Mandela was regarded by the poor, the oppressed, the marginalized, and the dispossessed in society as a hero and a freedom fighter. For the rich, at that time, he was regarded as the devil incarnate. During his imprisonment Nelson Mandela had nothing in common with the hypocritical media who now can’t stop singing his praise.

That all changed in the mid-1980’s when the working masses and poor revolted, mobilized, and organized themselves into mass organizations such as COSATU, the powerful trade union confederation built by the South African workers. This mass mobilization of the South African workers and youth, with the many strikes and mass protests, was what eventually led to the formal overthrow of Apartheid. The very same bourgeoisie that for years had kept Mandela in prison, seeing that they could no longer hold down the masses by repression alone, started to manoeuvre in a different direction.

The mobilization of the workers and the oppressed was so intense that it split the ruling class into two camps. The first camp was that of the hardliners around former president PW Botha. This camp, although beginning negotiations with the national liberation movement, could not “cross the Rubicon”. The second camp was that of the reformers around FW De Klerk. This camp clearly saw that the game was up and that the only way to safeguard the privileges of the elite was through negotiations. They were seeking a way of appeasing the masses by removing the Apartheid regime without removing the capitalist system that it was based on

Thus, the outcome of the negotiations proved to be a double-edged sword for the masses. Although the introduction of formal bourgeois democracy with a bill of rights was a significant concession for the working class and the oppressed people in society, the fact that capitalism remained intact meant that this freedom was in fact a freedom with a ball and chain.

Before he was imprisoned, Mandela defended the Freedom Charter with its call for nationalization with a passion. In 1959 Mandela said:

“It is true that in demanding the nationalization of banks, the gold mines, and land, the Charter strikes a fatal blow at the financial and gold-mining monopolies and farming interests that have for centuries plundered the country and condemned its people to servitude. But such a step is imperative because the realization of the Charter is impossible, unless and until these monopolies are smashed and the national wealth of the country handed over to the people.”

His stance on nationalization soon changed drastically, however. He was placed under immense pressure by the international and South African bourgeoisie to abandon his more radical positions. His visit to the World Economic Forum in Davos brought him in close contact with the big bourgeoisie who persuaded him to drop the idea of nationalization and to embrace the “market”. In this process, the former chairman of De Beers Consolidated Mines, Harry Oppenheimer was the chief instigator.

This embrace of “the market” was to prove disastrous for the workers and the poor. In the words of Ronnie Kasrils, an ANC leader: “That was the time, from 1991–1996, that the battle for the soul of the ANC got underway and was lost to corporate power and influence. That was the fatal turning point. I will call it our Faustian moment when we became entrapped – some today crying out that we sold our people down the river.”

Mandela has passed away at a time of ferocious class struggle in South African society. Today, inequality is wider than it was under Apartheid. This is the inevitable result of capitalism. History has once again proved that national liberation on a capitalist basis does not work. What the masses were struggling for was not only democracy, but equality in real terms, in jobs, wages, housing and living conditions in general. These aspirations have not been achieved to this day.

No doubt that the bourgeoisie will invoke Nelson Mandela’s legacy of “national reconciliation” and “national unity” at the time of his passing. The aim is clear: try and hold the masses back; try and block their path to genuine emancipation. However, this will not be easy and could only be short-lived.

The revolutionary qualities that made Nelson Mandela such a respected freedom fighter — his militancy in his youth, his hard-headedness, and his willingness to sacrifice his life for freedom — these qualities are today embodied in the South African proletariat. But there is no way out for the bourgeoisie and the proletariat today other than the road of class struggle. Capitalism in South Africa and on a global scale is in the middle of its biggest crisis. It has nothing to offer the working class except poverty, hunger, disease, and homelessness. Today the fight for real freedom and equality means the fight for socialism.

There is no future of reconciliation and national unity. The present and the future will be determined by the class struggle. But for the workers to win this fight, it is first necessary to build a strong Marxist tendency inside all the organizations of the working class. That is the task that socialists must dedicate their lives to. Only on the basis of Marxism will a genuine non-racial, non-sexist, and prosperous South Africa be realized.