NDP Doldrums: Is there a way out? 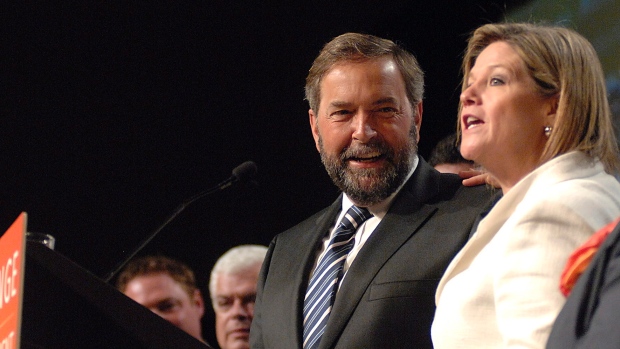 Since the heady days of the 2011 “Orange Wave”, there has been a steady stream of bad news for the NDP, both provincially and federally. There have been humiliating defeats in British Columbia, Nova Scotia, Ontario, and New Brunswick, plus low polls and lost by-elections for the federal NDP. The latest defeat came with the collapse in support for Olivia Chow in the Toronto municipal election after the federal party lost the race for her old riding. Rank-and-file party members are asking themselves how to get out of this hole. In Ontario, members gathering at a November policy convention are deciding whether they need new leadership to turn things around. In the view of Fightback, we need something far more profound than just a change of face at the top.

The Ontario NDP faced a disappointing defeat in the 2014 election. Fightback analyzed this at the time and explained that the right-populist campaign of Andrea Horwath demoralized the base and allowed the Liberals to win. Items like a ministry of accountability (a.k.a. the “ministry of austerity”), tasked to implement cuts of $600-million per year, made the NDP look like just another conservative party.

In the aftermath of the election, Horwath denied there were any mistakes. Her supporters said the three lost seats in Toronto were made up by three gained elsewhere. They blamed any setbacks on the so-called “Gang of 34”, who appealed to Horwath to change course during the election. The response from the ONDP leadership was, “Nothing to see here and I’m not going anywhere!” However, the reality of the shaky position of the leadership quickly set in and the tune was changed. Many union leaders began calling for a change at the top, as did prominent Toronto MPPs Cheri DiNovo and Peter Tabuns. It seems likely that internal polling revealed a seething anger in the grassroots.

Now, Horwath has fired her old advisors and is doing everything possible to save her skin heading into the November convention. In what appears to be a deathbed conversion, the party leadership is presenting a left-face to the rank-and-file with traditionalist speeches and opposition to the privatization plans of the Ontario Liberals. It remains to be seen whether the membership will buy it, especially given that Horwath won the party leadership calling herself a socialist before she moved sharply rightwards at election time. As they say, “Fool me once…”

There are a layer of Blairite apparatchiks at the top of most of the provincial and federal New Democratic parties. These professional politicos, in the main, have contempt for working-class people. They think the way to win is to moderate and move rightwards. The workers, the young, and poor are written off because, ”Most of these people will never vote anyway.” The careerists never consider the role their soft-soap policies have in leading to the demoralization and disinterest of the base. Ironically, while these people attack the socialist wing of the party for being too ideological, their “only moderation can win” dogma continues despite mounting evidence to the contrary. BC, Nova Scotia, Ontario, New Brunswick, lost by-elections, lost mayoralties, and low polls are all explained away using episodic and accidental phenomena, or by just complaining that the workers are “too stupid” to know what is best for them. The left is repeatedly told, “Tommy Douglas believed in balanced budgets,” as if that is the only thing he believed in. They stand silent when asked if Tommy believed in anything else or if there is anything in the present campaigns that is equivalent to Medicare?

Interestingly, it appears that reality may be beginning to overcome the Blairite dogma within the federal NDP. Up until the fall of 2014, Tom Mulcair moved steadily to the right. He called for cuts with a scalpel instead of a machete and took a sympathetic line to Israeli imperialism against the Palestinian people. This elicited minor revolts in the rank-and-file and a steady slide in the polls, back to the NDP’s traditional 20%. However, in the last few weeks, it appears as if there has been a change at the top. Instead of “good cuts,” Mulcair is proposing implementing a national $15-per-day childcare program and a $15/hour federal minimum wage. The first is a real reform, if it is ever implemented, and would cost $5-billion a year. The $15 minimum wage would only affect a very small number of workers in federally regulated workplaces, and it is set to be phased in over several years, but it is symbolically important in the fight for a living wage. Most workers will not look at the small print on these reforms and instead will be enthused by the direction the party is heading in. This is already having the effect of slightly improved poll numbers; most polls have the NDP’s support up to 25%. Even on foreign policy, Mulcair has been quite effective opposing the war against ISIS (in notable contrast to most European social-democratic parties and even the “Trotskyist” Mandelite MPs in the Danish parliament who support the war).

The next federal election is 12 months away and it is impossible to predict the outcome. Will the hatred of the Harper Conservatives be generalized in time? Will the Trudeau bubble burst, or will people be fooled by a great haircut and vacuous statements? Will the NDP offer up sufficient reforms to enthuse workers and youth that it will actually make a difference to support the party? Any of the three parties could form minority or majority governments and the best chance for the NDP is to solidify this minor left turn with a more substantive and comprehensive socialist program.

However, if the NDP were to win government, the problems would not stop there. The Blairite apparatchiks, like the defeated Dominic Cardy in New Brunswick, may think that “right is right and left is wrong” no matter what, but an opportunist left turn is not a massive improvement. In a minority situation the NDP will face massive pressure to jettison even its minor reforms and form a coalition with the Trudeau Liberals, who are a party of big business. Let us not forget that the greatest cuts in Canadian history were implemented by the Liberals under Jean Chrétien and Paul Martin. Even in the event of a new orange wave and a majority government, the NDP may find that it cannot implement its platform. Economic storm clouds are gathering and there is a real possibility of another global slump. Additionally, there will be massive pressure from corporate Canada for the NDP to abandon anything that benefits working people. The Bob Rae Ontario NDP government in the early 1990s faced a capital strike that eventually forced them to abandon their main reform of public auto insurance and implement austerity against the working class. A federal NDP government will likely face the same fate unless it breaks with capitalism and enacts socialist policies. If the bosses refuse to invest, and organize a capital strike and economic sabotage, they should be expropriated and the wealth of society used to meet communal needs. It is a sharp choice, but if a federal NDP government stays with capitalism it will go down just as hated and discredited as Bob Rae’s.

Returning to the choice faced at the Ontario NDP convention, we appeal to delegates not to be blinded by leadership politics. For too long, the party has subsisted on an artificial and apolitical “cult-of-personality” mantra where the name of the leader overshadows that of the party and policies that could make a difference for working-class people. This gets even more ridiculous when leaders change and a new cult has to be generated. It seems ludicrous to restate this, but if you want to make change then policies have to be placed higher than personality. The point is not to change the figurehead, but to change the direction you are sailing. Let us not forget that both Carole James and then Adrian Dix were dumped by the BC NDP, but in turn they were replaced by the Blairite John Horgan in an uncontested race with large bureaucratic barriers to opposing candidates. There also appears to be a revolt brewing in the Manitoba NDP against Greg Selinger. The way out lies in politics, not the cult of personality.

The federal NDP has adopted $15 childcare and a $15 minimum wage. We see no reason why the Ontario NDP, and other provincial wings of the party, cannot also commit to the same policy. On the provincial level, a $15/hour wage, with no phase-in, would massively improve the lives of hundreds of thousands, perhaps even millions, of minimum-wage workers. The potential exists for the NDP to initiate a nation-wide mass movement. The Blairites will respond that such a policy is too radical; well, we encourage them to direct their critiques against the “radical” Tom Mulcair.

If Horwath wants another chance at leading the party, then she should commit herself to a $15 minimum wage and childcare, or equivalent platform points and a turn to the left. Such positive polices could enthuse the base and get the party out of its present rut. However, if Horwath restricts herself to “progressive” speeches with no commitments, and a purely negative policy of opposing privatization and other regressive Liberal measures, the rank-and-file have no guarantee that there will not be a further right-populist debacle at the next election. In that case, Horwath must go and we must fight for a genuinely socialist candidate for party leader. The only way out of the present malaise is to turn left.