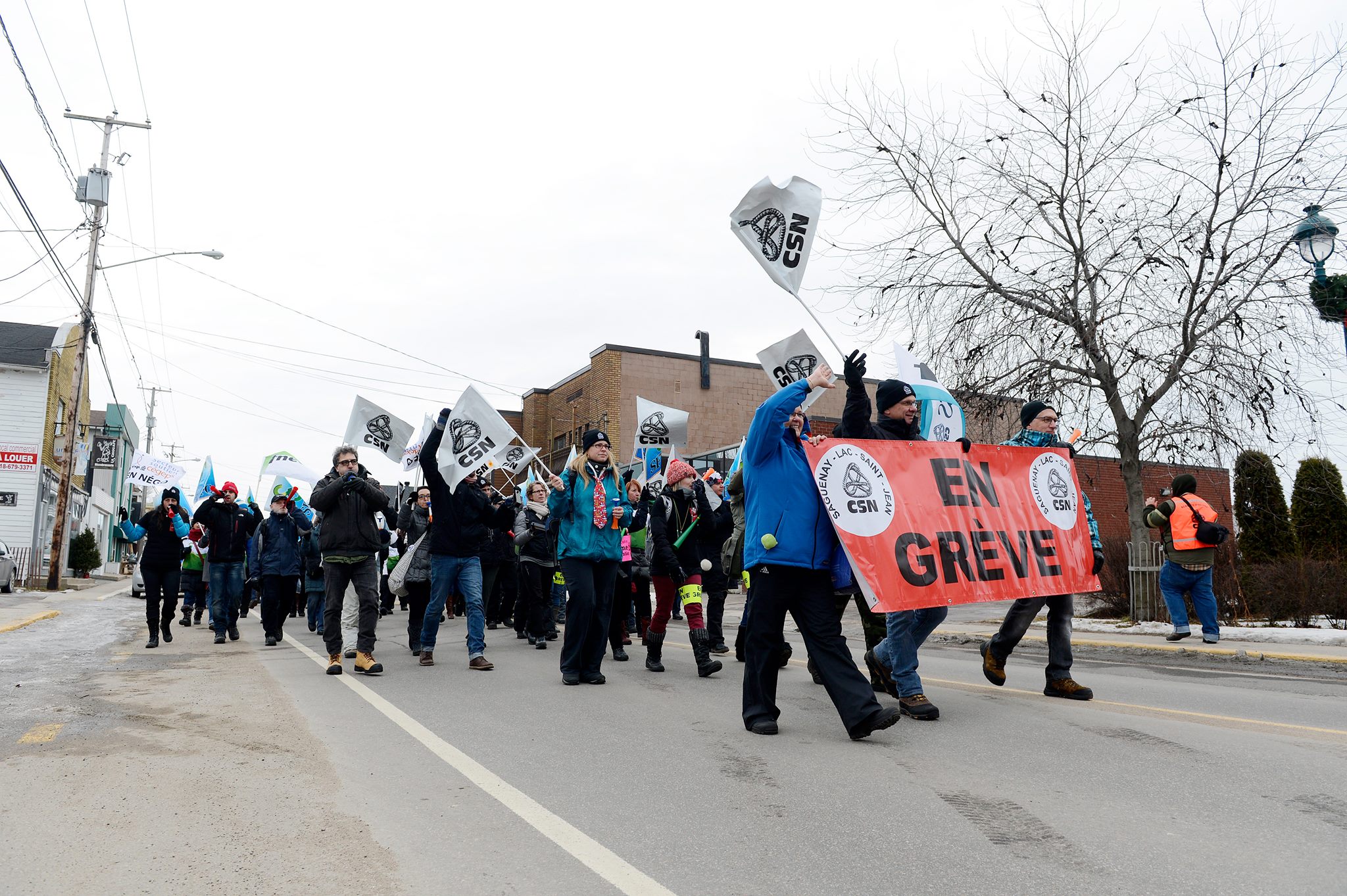 On Wednesday December 9th, over 400,000 public sector workers organized in the Common Front staged a massive 24-hour strike. All over the province, public buildings were shut down by picketers and mass demonstrations were held. Jacques Letourneau, the president of the CSN called this the biggest public sector strike since the revolutionary general strike of 1972. He stated that “There were 210,000 on strike at the same time then and today there are more than 400,000.” The working class is flexing its muscles in Quebec, posing a real challenge to the austerity agenda of the Couillard government.

By all estimates, the movement of the public sector workers has been a historic success. Leading up to the 24-hour strike, the public sector unions held two rounds of rotating regional strikes with public sector workers in different regions walking off the job on different days throughout the week. There were mass demonstrations all over the province, the biggest of which occurred on October 3rd with 150,000 workers flooding the streets of Montreal. Ministers’ offices were often occupied with the workers forcing many ministers to cancel public declarations and speeches. Union leaders have celebrated the obvious fact that “the balance of power, is on our side,” as was claimed by Louise Chabot, president of the CSQ. This does seem to be the case as recent polls show that public opinion is now firmly on the side of the unions. According to a Léger/Le Journal-Le Devoir poll released in November, 51% of respondents stated that they supported the unions, compared with just 28% who said that they supported the government.

More and more, it has become obvious who this government serves. The hypocrisy of the government being able to find $1 billion USD to give to the private aerospace manufacturer Bombardier while claiming that their is no money for teachers and nurses has angered the population to the core. The fact that the Liberals were not elected on a program of austerity only adds insult to injury as workers feel lied to. On top of this, the Couillard government has had the gall to raise the salaries of elected deputies this year from $90,000 to $140,000/year! This is all at the same time as they have remained defiant, refusing to budge on the main contentious points, those of public sector wages and their plan to increase the retirement age by two years.

The union leadership jeopardizes the movement

Unfortunately, in spite of the massive response from the rank-and-file, the leaders of the Common Front have not been giving a strong lead to the movement. While the balance of power is clearly on the side of the unions and the potential exists for a movement of epic proportions, the leadership has been shying away from a direct confrontation. Instead, they have canceled strike dates and decreased their demands in the hope that this would somehow move the government from its entrenched position.

The events leading up to the planned 3-day province-wide strike in early December clearly demonstrate this. The counter ‘offer’ tabled by the government in early November was correctly seen as a smack in the face. The union leaders even denounced it as being “four quarters for a dollar,” as it contained exactly the same offer on salaries as the previous offer – that is only 3% over 5 years. In response to this, the Common Front leaders claimed that somehow the ball was in their court and they were obligated to submit a counter offer to the farce that was thrown in their faces. As an act of ‘good faith,’ the 3-day strike was canceled and the demands were lowered from a 13.5% wage increase over three years to just 6.9% over the same time period. The reasons given for this retreat was to “leave space open for negotiations.”

Weakness invites aggression. Immediately in response to this, Martin Coiteux, the president of the Treasury Board stated that the government and the unions were still “Light years apart” and that the demands of the Common Front were “unrealistic and unacceptable.”

This confusing capitulation came as a shock to many in the movement. How are we supposed to make the government back down if we are not going to strike? There was a notable pushback against this capitulation and many unions started to radicalize. The FAE, representing 34,000 primary and secondary teachers voted for three days of strike action. The FSSS-CSN, representing 110,000 public sector workers voted for a mandate of an extra ten strikes days. The pressure broke through with the Common Front and finally a one-day strike was called for December 9th.

Workers have also started defying the unjust laws imposed on them by various layers of government. Earlier in the week the blue-collar workers of Montreal openly defied a ruling of the labour board and walked off the job to attend a big union meeting at the Palais de Congrés. The labour board had notified the union many times that this would be considered an illegal strike but the union went ahead with it anyway. According to one blue–collar worker, “We were warned, we received the letters. We need to advance, we don’t want to back down. We want to stand up to this campaign of fear by the city.” The FNEEQ, a union representing 34,000 post-secondary teachers, also voted to continue the strike even if back-to-work legislation is tabled by the government, calling on civil disobedience.

Due to the pressure of the massive strike mobilizations, the government has backed down on some secondary issues with different unions, but the big question of wages and pensions will need to be decided with the 400,000+ Common Front for all of the workers. The Liberals are the preferred governing party of the capitalists in Quebec, with a long history of attacking the workers. There is nothing more they would like more than to send a message to the militant worker and student movements in Quebec that it is not possible to threaten their power and defeat austerity.

The pleas of the union leaders for the government to negotiate in good faith sound strange next to the callous remarks from the government. In response to the huge one-day strike, an arrogant Coiteux stated that the strike was “irrelevant” showing that the Liberals still do not plan on budging from their position. Faced with this situation, what is to be done?

The workers have shown their willingness to fight time and time again. During the strike, normally apathetic workers have become radicalized and are learning brutal political lessons. This is starting to show itself as unions take up more radical measures and vote for more strike days, against the direction of the Common Front leaders. This push must continue and be extended. Local unions need to push for the re-establishment of the initial salary demand of 13.5% over three years and for the re-establishment of the original plans for the three day province-wide strike with mass demonstrations. If they will not listen, we will make them listen!