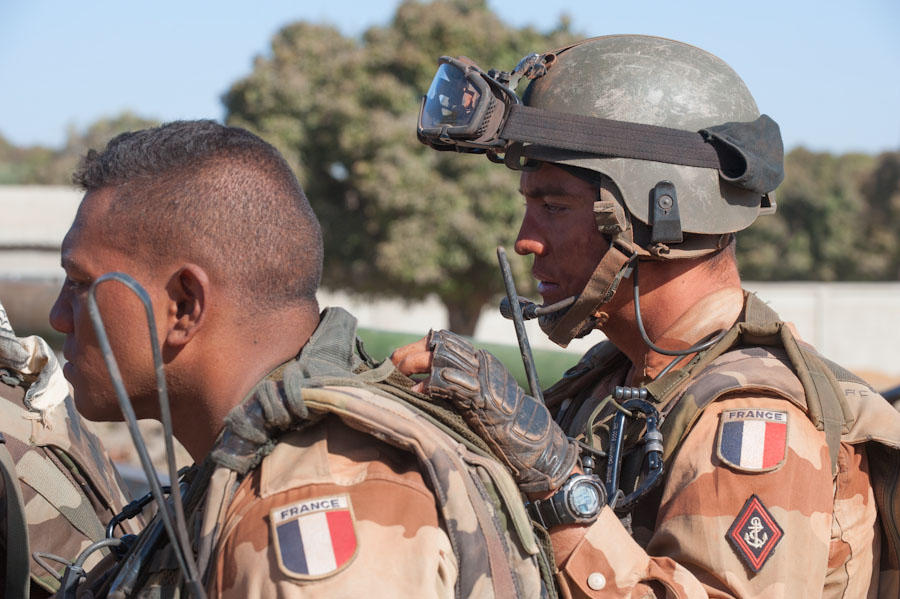 François Hollande has decided to flex his muscles. Based on the “threat of Islamic terrorism”, the French president has deployed 1,700 soldiers in Mali, and another 800 are expected to arrive within a few days. The “international community” has unanimously approved of the intervention.

The US, Britain, and Italy have already indicated that they will provide logistical support for the French intervention. Italian foreign minister Giulio Terzi has offered air support from Italian forces and has the unlimited use of bases in Italy. Mr Bersani, a strong candidate for the future Prime Minister of Italy, has given full support to Italy’s involvement.

Of course, the French president has said that his country “does not have interests in Mali” and that the action is “exclusively for the purpose of peace.” But this is a very small fig leaf covering what is in reality an imperialist intervention to defend the interests of the old colonial power.

Mali has been ravaged by civil war for more than a year. The Tuareg people have a history of national liberation movements. For decades the MNLA have been fighting for decades against Bamako’s central authority. At the end of 2011, an alliance was formed by three fundamentalist groups: Al Qaeda in the Islamic Maghreb (AQIM); Ansar el Din; and the Movement for Oneness and Jihad in West Africa (MOJWA). In April this alliance occupied the north of Mali and the major cities Kidal, Gao, Timbuktu and Niafunke. A temporary agreement between the Tuareg militias and the central government created a temporary breathing space, but the “men in blue” were soon overwhelmed by the jihadists of Al Qaeda. The threat of four thousand Jihadist fighters, well armed and much more determined and aggressive than the Malian army, made the situation too precarious and unsustainable for French interests.

Already a military intervention had been planned by ECOWAS forces (Economic Community of West African States), but only for next September, as the African powers wanted to prepare the ground in their own respective countries. This intervention was heavily supported by former centre-left prime minister of Italy, Romano Prodi, who now serves as UN special envoy in the Sahel. But the imperialist intervention of France accelerated all of this, and after a brief moment of embarrassment the UN also applauded the move.

Mali is a key country in the middle of West Africa, and is an important route to Niger, the main supplier of uranium for French nuclear power plants. So, far from the official pretext of the ‘rise of Islamic Fundamentalism’, there are important strategic and economic interests at stake.

The crisis of capitalism, and the frantic search for markets and regions to exploit, pushes the main capitalist powers into clashes across the world. The expansionist policy of China in the African continent has been noted with increasing concern by the old colonial powers (France and Britain) and the new (USA). Feeling threatened because they cannot compete in terms of investments, they try to recover their ground through military intervention.

First with Sarkozy and later with the Socialist government, Paris has developed a more interventionist policy towards the “Francafrique” countries. In this regard we can look back at the intervention of French Special Forces in the Ivory Coast in April 2011. Here, four days of attacks with heavy weapons and rockets at the presidential palace in the heart of Abidjan finally led to the arrest of Laurent Gbagbo, the former president. Throughout this military attack, the bloody conflict between him and Ouattara, a former Director General of the IMF, was sponsored by France and the EU.

Better known is the role played by France, together with the other European powers, in the overthrow of Gaddafi. After the initial surprise and fear of the outbreak of the Arab revolutions, French and British imperialism tried to turn the situation in their favour, at least in Libya.

With the death of Gaddafi, it seemed like everything had been sorted out, but the fighting and instability prevailing between Tripoli and Benghazi showed that Western intervention, far from pacifying the country, completely destabilized it. This destabilization was also felt in neighbouring countries. In its campaign, the West funded anti-Gaddafi fundamentalists and supplied them with modern arms. Their victory has served as an example. One of the most important rebel groups in Mali, Al-Qaeda in the Islamic Maghreb, has close alliances with the group of Libyan Islamist fighters (which recently changed its name to the Libyan Islamic Movement), which includes among its main leaders Abdelhakim Belhadj, head of the Military Council of Tripoli after its “liberation.” Thanks to the intervention of NATO, Libya has turned into one of the main bases for fundamentalism. But this is not of much concern for oil multi-nationals, as business has never been better.

But in Mali, Hollande said, military intervention is to “defend democracy”. Too bad that in March 2012 there was a coup. In Bamako, the Capital of Mali, control is in the hands of a military junta led by Captain Amadou Haya Sanogo, who suspended the constitution and the main democratic rights, and who appoints and removes the presidents at will.

Sanogo has been trained in the US, and was therefore granted a degree of confidence in controlling Mali. But he has not been able to deliver; that is, to stop the advance of the rebels. This is where the “disinterested” democratic France comes into the picture.

This move by the Hollande government has also proved difficult for the Front de Gauche. In the parliamentary debate on 16 January, Francois Asensi, an MP of FdG, emphasized the severity of the crisis and “the need for an international military intervention to resolve it.” He continued stressing that to “Leave the people of Mali to the barbarism of the fanatics would be a political mistake and a moral offence.” The only criticism addressed to the government was the absence of a parliamentary debate before the taking of the decision. L’Humanité (a daily close to the French Communist Party) has also published articles that are along the same line.

What we are once again witnessing is a “humanitarian war” to justify an aggression that will not solve any of the real problems; a war that must be opposed. Some people on the Left in Italy are calling for a pan-African force to resolve the conflict in Mali. However, the problem is not the nationality of the troops, but the interests that they defend.

An intervention under the auspices of ECOWAS and UN would be a proxy war. This would also be welcomed by the US, who would recommend Nigerian troops (the main force in the region) at the head of the intervention. In any case, the masses of Mali would not benefit from this.

Two weeks after the arrival of French troops in Paris, what seemed like a walk in the park is turning out to be more complicated.

So far, western governments have showed a lot of support in words, but very few soldiers, tanks or jets have been sent. The US has offered logistical support, but not a long-term commitment. Washington has offered C-17 cargo planes, with a carrying capacity of 140 tons of equipment, and eighty men. The US administration has already burned its fingers many times, from Iraq to Afghanistan and is afraid of what the consequences of a direct intervention in Mali would be at home. It is likely that, for a period, Mali will be a French affair, as far as western imperialism is concerned.

The seizure of hundreds of hostages by a fundamentalist group in the Algerian Sahara is just a taste of what is to come in the future. The Western media are surprised by the ferocity of the terrorists, but their actions are nothing more than the other side of the brutality used by Western troops in daily air strikes that disrupt the cities occupied by the rebels.

The attack is also dragging Algeria into the conflict, although the Algerian ruling class would rather have taken more time to prepare the attack and thus avoid internal instability. However, proving its total subjection to the former colonial power, Algeria promptly allowed French jets to pass through its airspace.

The French intervention, therefore, has aggravated the situation in the region and increased the resentment of the Malian population against the West. Imperialism, in its old age, is like a bull in a china shop: it destroys everything it encounters. The forces of fundamentalism are, above all, benefiting from this situation. This tragedy has its roots in the failure of the European (and African) Left to provide an alternative to the barbarism inflicted by capitalism on the African masses.

The dream that characterized the leadership of Africa that emerged from the colonial revolutions of the 1960s — that of a happy path toward progress — has been revealed to be a nightmare. This was an illusion born from the Stalinist perspective for a long development of capitalist democracy, based on the post-colonial “progressive” bourgeoisie.

There isn’t a single country where this has come true. Through time, all currents within the liberation movement have either been destroyed or become lackeys of imperialism. Today the only alternative to war is a generalized mobilization and struggle against capitalism and imperialism. This struggle must be linked to the Arab revolutions and the struggles of the working class in the key countries of the continent, such as Nigeria and South Africa, and the placing of a new perspective on the agenda: that of socialism.