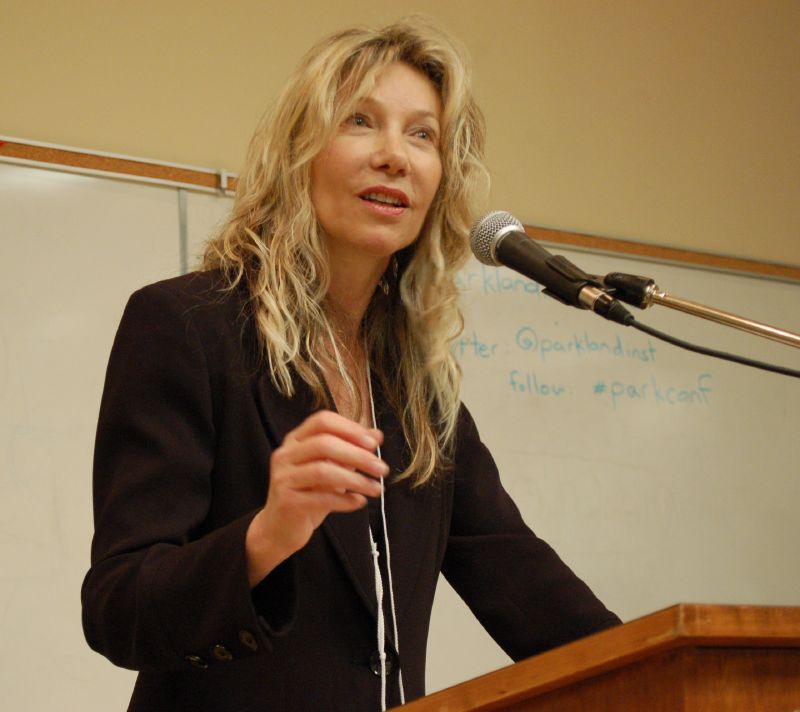 On 15th September, hundreds of New Democrats attended the NDP nomination meeting for the upcoming by-election in Toronto-Centre. The exciting nomination race was between three candidates: Jennifer Hollett, Linda McQuaig, and Susan Gapka. Linda McQuaig, a well-known writer and journalist, won the nomination race to enormous applause. Linda’s vocal challenge against inequality and “the austerity agenda” makes her nomination an important victory for the left-wing of the NDP.

The nomination campaigns of the candidates were impressive and the level of interest garnered in the nomination race has not been seen in the Toronto-Centre riding in recent memory, in large part because Toronto-Centre has traditionally been seen as a Liberal bastion. However, the last federal election campaign, which doubled the NDP’s share of the vote to 30%, put the riding within striking distance for the NDP.

There is a huge potential in Toronto-Centre for the NDP and there is no good reason for the NDP’s past failure to win in this riding. Large sections of the riding are home to tenants who live in deteriorating housing, and inequality is glaring in the community.

A couple of minutes from the mansion-filled neighbourhood of Rosedale is the St. Jamestown community, which has one of the highest population densities in North America. Poverty-stricken regions on Sherbourne Street are just minutes away from luxury shopping boutiques. Public housing and luxury car dealerships, immigrant working class communities and gentrified condo developments, homeless shelters and Bay Street — Toronto-Centre has it all. It is in this context in which this important electoral battle will be fought.

An opportunity to fight austerity

The immediate media buzz generated by Linda’s nomination has certainly put the party brass under pressure. The mainstream press has correctly explained that Linda’s policies are significantly to the left of those of NDP leader Tom Mulcair. The National Post has even suggested that, if elected, Linda could become a champion for the NDP’s left-wing.

The policies put forward by Linda represent a significant break from those being put forward by the NDP leadership and, notably, those of Mulcair. In her book, The Trouble With Billionaires, McQuaig highlights the growing inequality in society with all income gains in the recent period going to the richest of the rich. Linda put forward a significant program of wealth redistribution and expanding public services and benefits.  In her nomination speech, she made the fight against austerity a foundation of her program.

This is in sharp contrast to Thomas Mulcair’s recent statements that “the NDP would make cuts, but they would be better cuts”, and he would do so with a “scalpel” instead of a “rusty machete”.

Instead of explaining that working-class people should not pay for an economic crisis caused by the rich, Mulcair is promising to protect the wealth of the rich while ensuring that working class people pay for that crisis through “better cuts”. This is a recipe for an NDP government that would oversee growing inequality, the deterioration of working people’s living conditions, and the continuation of austerity.

The victory of Linda McQuaig represents an important victory for the left-wing of the NDP. Her victory bolsters rank-and-file activists and trade unionists frustrated by the shift to the right at the top of the NDP. It is likely that McQuaig’s ideas are those of the majority of NDP members. However, for decades the ranks have been convinced to accept watered-down policies in the hope that this will lead to victory. Party members are enthusiastic because, for the first time in over a decade, they have a candidate who stands for redistribution of wealth and can win.

Despite a well-organized campaign and significant support from the party brass for Jennifer Hollett, the rank-and-file of the NDP mobilized enthusiastically to support Linda. The Toronto Young New Democrats (TYND), a bastion for socialist politics in the Ontario NDP, gave a strong endorsement to Linda McQuaig after a well-attended debate by the three candidates. It was also clear that many disillusioned and inactive New Democrats in Toronto-Centre had become re-energized, and rallied to the nomination meeting to ensure Linda’s victory.

Activism and working-class politics are needed to win

If Linda McQuaig stands on a program that speaks to the needs of working-class people, and that puts forward commitments that reduce or eliminate inequality and halt austerity, it will create an enormous amount of enthusiasm in her campaign.

The NDP’s most successful campaign in the Toronto-Centre riding was run in 2011, under the leadership of the Toronto Young New Democrats (TYND) and with a strong influence of socialist politics. The 2011 campaign was run with a strong emphasis on activism instead of typical electoralism. The slogan, “Vote working class!” was central in the campaign and over 100 were mobilized to pull out the vote on election day. The TYND succeeded in doubling the NDP vote, winning 30% of the votes, and breaking the record for the number of ballots cast for the NDP in the riding.

Now that the riding is deemed winnable, careerist elements will begin offering their questionable services. There will be enormous pressure from the NDP tops and so-called “experts” to soften the political content of the platform and for Linda to speak to the supposed “middle ground”. Nothing could be more harmful to the campaign and more beneficial to the Liberals than sanitizing and watering down the platform.

This exact scenario was witnessed during the 2011 Ontario provincial election, just months after the TYND ran the enormously successful federal election campaign in the riding. Cathy Crowe, the provincial election candidate, had a long history of grassroots activism around anti-poverty and housing issues. She was much better known than the federal candidate, Susan Wallace, and had a well-funded campaign.

Under pressure, Cathy ran a “responsible” election platform directed to her by party bureaucrats. Despite enormous advantages over the financially strapped TYND-run federal campaign, she got 5,000 fewer votes (11,495 votes compared to 16,818 votes in the federal campaign). The gap between the NDP & the Liberals was also much greater, with Cathy losing by nearly 30 percentage points as opposed to the 10-point gap in the federal campaign.

A repeat of this scenario could be a disaster for the upcoming by-election. Cathy’s campaign was a textbook example of where a genuine activist, in her case a well-known anti-poverty fighter, was pressured into following a politically compromising party line. This shift to the right ensured her defeat at the hands of the Liberals. There is a parallel here with Linda’s outspoken and well-known advocacy against inequality. We should not allow a similar process of watering down and “whipping into line” by the party brass to occur in the upcoming by-election.

We should also remember that Toronto-Centre is not an easy riding to win for the NDP, precisely because working people have become disillusioned with politics; they feel that nobody stands for their interests. It is true that working people lean towards the NDP; however, many will not bother to vote and will certainly not volunteer if they don’t feel that they can change the many problems they face through the campaign. Furthermore, the Liberals, who have a strong entrenched apparatus in the riding, will have a well-funded campaign and have a history of giving favours and benefits to “community leaders” that will pull the vote in their direction.

To beat the Liberals and to make a symbolic victory in the upcoming fight against Stephen Harper, the campaign will need to champion the issues of working-class people. It will need to break from the disappointing and unenthusiastic platforms that have characterized the NDP in the recent period. It will need to mobilize and agitate working people and youth to vote, but more importantly to become active in the political process, in the NDP and in political activism more generally.

Is it possible to fight inequality without fighting for socialism? 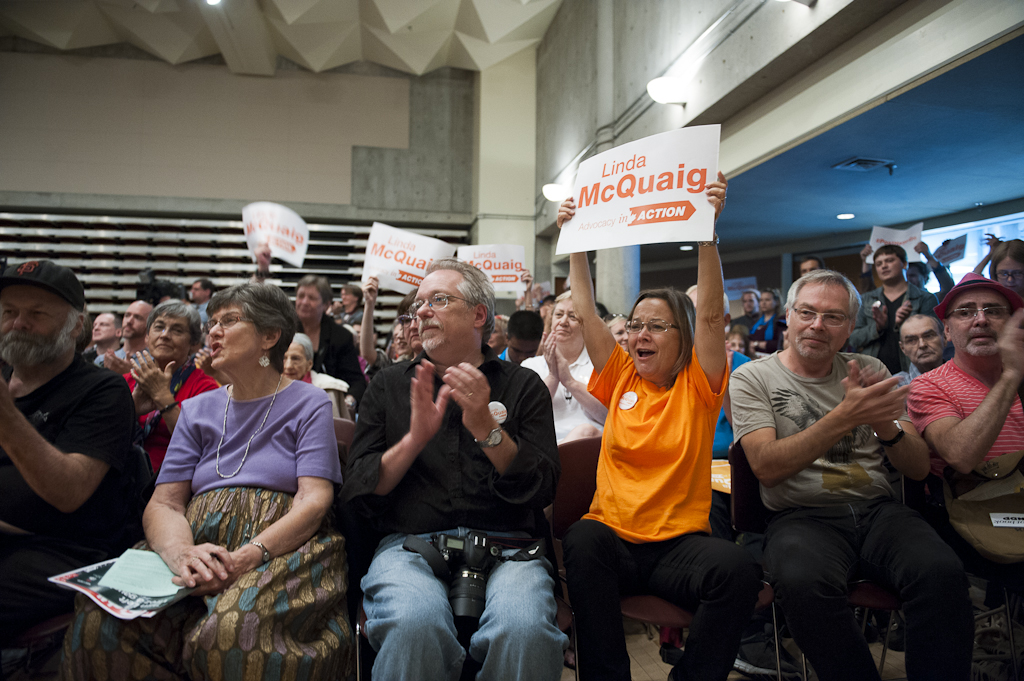 The Marxists have supported Linda’s “anti-austerity” campaign as representing a shift to the left in the NDP. Nevertheless, we must have an honest discussion about the type of policy that can beat austerity and end the growing inequality in Canadian society.

Linda has shown a willingness to stand by the principles outlined in her books, which is laudable, but she has been unwilling to come out in support of socialism. Her politics can be defined as being left-reformist or left-Keynesian. Her proposal is for higher taxation and redistribution of wealth, while maintaining private ownership and the capitalist market system. The conclusion one reaches is that it is possible to balance the interests of the bosses and workers.

Fightback does not believe that the austerity agenda is simply an ideological construction, or a “manufactured crisis”. The current economic crisis stems from the failure of the capitalist system itself and not some bad policy choices of right-wing politicians. There is no fair balance between the bosses who do not work, and the workers who create all wealth. It is the division of society into mutually conflicting classes that is at the root of the economic crisis, and the crisis will only be done away with once we fight for a classless society — a socialist society.

The idea that there can be a fair capitalism is essentially utopian. However, the fact that Linda McQuaig’s campaign is mobilizing working-class people against austerity is a great step forward. Through the struggle against austerity, workers and youth come to understand the power of collective action and become confident in their own strength. Workers also come to understand the limits of what can be achieved while maintaining capitalism, and come to see the necessity of transcending capitalism if any improvements are to be made. That is why we make a call to all socialists to get active in this campaign, in order to help people in the riding make the bridge in consciousness to understand that only with socialist policies can austerity be defeated.

The victory of Linda McQuaig is a signal for young activists, trade unionists, and socialists that the New Democratic Party is a potential vehicle in the fight against capitalist austerity. It will require many more victories such as this one to turn the tide, but the coming Toronto-Centre by-election presents a concrete opportunity to stop the rightward shift and begin a movement to the left.

Many on the left wrote off the NDP after its recent turn to the right. We hope that the victory of Linda will help them see that the class struggle is not a one-way street, and that it is worthwhile to fight within the party for anti-austerity and socialist policies. It is absolute folly not to engage with the thousands of workers and youth who will be reached in this campaign. To remain haughty and aloof from these people is to make yourself irrelevant. Fightback encourages activists and socialists, including those who are not members of the NDP, to help fight the shift to the right in the NDP. Let us use the campaign to advance socialist policies in the NDP and the labour movement.

The nomination of Linda McQuaig is a victory for the left — for working class politics — in the NDP. All who oppose austerity must get active in the campaign to ensure that there is a clear defeat for the pro-austerity candidates and to make sure that there is no watering down of the NDP election platform. Finally, the fight does not end after the election. It is necessary to build the forces within the NDP that fight against the rightward “better cuts” mantra. We hope that with a victory in Toronto-Centre, Linda McQuaig will be a comrade-in-arms in this fight. It is necessary to commit the NDP to genuine policies that will end inequality. We need the NDP to come to power on a socialist program.