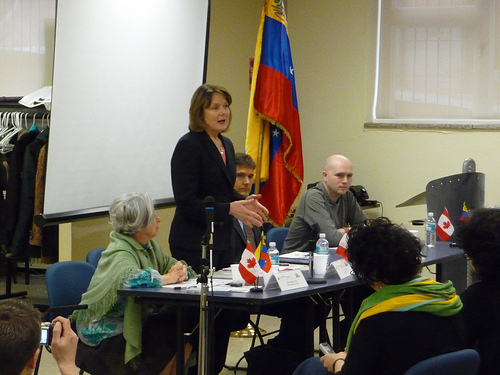 The conference, held at the OPSEU Hall in downtown Toronto, was chaired by Alex Grant and Maria Paez Victor, both representing HOV and the Bolivarian Circle. The need to build an anti-war campaign for Latin America has gained a new impetus given last summer’s coup in Honduras and recent attacks on Venezuela by Canada’s Peter Kent and the US’ Hillary Clinton. The Reuters article at the end of this report reveal the imperialists’ interests regarding Venezuela.

The first featured speaker was Peggy Nash, president of the federal NDP and the NDP’s candidate in Parkdale-High Park in the next federal election. Peggy spoke about her experiences in building solidarity with Latin American movements and her personal experiences of travelling to Chile prior to the coup d’état in 1973. Peggy admitted that she, like many other Canadians, did not realize how much imperialist aggression had escalated in South America and the very real dangers that Venezuela was facing. She emphasized how the federal NDP has been leading the campaign against the Canada-Colombia free trade agreement that is currently being debated in Parliament. She promised to push Latin American solidarity within the NDP and make sure that it is highlighted by the party.

Nchamah Miller, spokesperson for Latin@s Canada, spoke next with details about the increasing US militarization of South America. The mobilization by US imperialism is its response, under the Monroe Doctrine, to try to preserve US interests in Latin America.

Nchamah outlined how the United States has reacted to the perceived “threat” to their interests. The US has activated their Fourth Fleet in the Caribbean and activated a new base in Panama so that they can have access to this fleet. More dangerously, the US has taken control of 16 military bases in Colombia (mostly near the border with Venezuela), as well as activating at least 71 bases throughout the southern cone of Latin America. Latin American countries are banding together to fight the US threat by proposing a new Organization of American States, which will not include either the US or Canada. 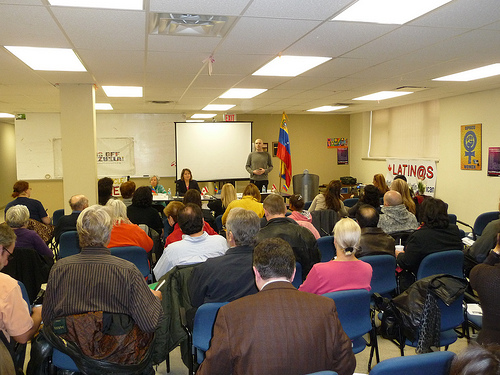 The last speaker was José Antonio Rodríguez de la Sierra, attaché to the Venezuelan Embassy in Ottawa. José Antonio gave an admirable presentation that was prepared by the original invited speaker, Captain Juan Carlos Coronado, the charge d’affairs at the Venezuelan Embassy, who unfortunately was unable to attend due to health reasons. Speaking from the prepared notes, José Antonio reiterated the dangers facing Venezuela in the current period. He also mentioned that since the revolution began in Venezuela, Venezuela had never threatened war on anyone, unlike the actions and propaganda of the United States.

To summarize the discussion, Alex Grant from HOV thanked the Consulate, the Embassy, the sponsoring organizations, and all those present. Alex explained that this was our opportunity to build a new anti-war movement based on Latin America. The past movements against the wars in Afghanistan and Iraq had a problem that on the opposing side were the Taliban and Saddam Hussein; nobody would get enthusiastic about defending these reactionary regimes. However, in Latin America, we’re defending the revolutionary movements of the people in Venezuela, Bolivia, Ecuador, and Cuba. We’re defending the right of the people of the region to use their resources to raise their own standards of living, instead of going to Western corporations. This means that the movement to stop war in Latin America can be built with great enthusiasm.

A little over 75 people attended the conference. After the speakers, attendees mingled with the speakers and organizers, and enjoyed refreshments kindly provided by the Venezuelan Consulate in Toronto. Nearly $200 was also collected to help HOV send observers to the upcoming launch of the Fifth International in Caracas. Everyone left the meeting committed to informing their friends and co-workers about the growing threat of war in Latin America and the need to build an active movement that doesn’t just aim to stop war, but to defend the gains of the revolutions in Latin America.

WASHINGTON (Reuters) – The chief of the U.S. military’s Southern Command said on Thursday that Venezuela’s socialist government is a “destabilizing force” in Latin America and continues to back leftist guerrillas in Colombia.

General Douglas Fraser’s comments in congressional testimony came a week after he told a U.S. Senate hearing that the Pentagon had no evidence of a “government-to-terrorist” connection between President Hugo Chavez’s government and Colombian FARC rebels.

Southern Command is responsible for U.S. military activities in much of Latin America.

“They continue to have a very anti-U.S. stance and look to try and restrict U.S. activity wherever they have the opportunity to do that,” Fraser said. “They are continuing to engage with the region … and continuing to pursue their socialism agenda. … They remain a destabilizing force in the region,” the general said.

Fraser said Venezuela continues to provide the FARC a safe haven and “financial logistical support” based on information found on a laptop computer of a FARC commander seized by Colombian soldiers during a raid on a guerrilla camp in Ecuador in 2008.

Venezuela’s ambassador in Washington, Bernardo Alvarez, said the reversal of the general’s position, to conform with statements by officials in the Obama administration, showed the United States has no proof of Venezuelan support for the FARC and the criticism was politically motivated.

During a recent tour of Latin America, U.S. Secretary of State Hillary Clinton stepped up criticism of Chavez, a populist leader who is the fiercest opponent of U.S. influence in the region even though his country is a major supplier of oil to the United States.

Alvarez said the data on the computer cited by Fraser had been “manipulated” to cook up accusations against Venezuela that are aimed at justifying the deployment of U.S. troops to bases in Colombia, the main U.S. security ally in the region.

“The Obama administration is continuing the aggressive policy against Venezuela of the Bush administration,” Alvarez said in an interview. “They cannot accept a government with a different ideological perspective in this hemisphere,” he said.