Justin Trudeau and the disorder of the Phoenix (payroll system) 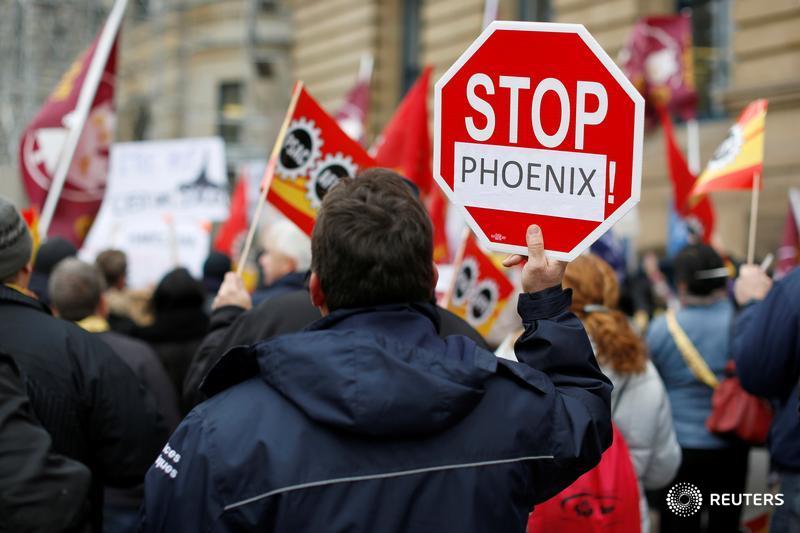 It has been more than two years since the federal government rolled out Phoenix, the notorious payroll system that has failed to correctly pay more than half of the 300,000 workers in the federal public service. The Auditor General, in his spring reports to Parliament, described the system as “an incomprehensible failure”—words that will shock no one who works for the public service. Huge numbers of workers have complained of being overpaid or underpaid, and still more have gone completely unpaid for months at a time. Some are owed thousands or even tens of thousands of dollars in back pay. The “solution” that Prime Minister Justin Trudeau and the Liberals have offered could take up to a decade to come into effect, leaving many of these workers stranded and with no way out.

Phoenix began as a Conservative initiative to replace the original system, where pay was handled by skilled pay advisors within each department, with a “modern” automated system that would supposedly reduce government bloat and “save taxpayer dollars.” The development of Phoenix was contracted out to IBM for $5.7 million, and then launched by the Liberals—despite numerous warnings from public sector unions that the software was not ready—in early 2016. An estimated 1,200 pay advisors across Canada were laid off and replaced with 460 new pay advisors and 90 support staff at a new centralized pay centre in Miramichi, N.B.

It would not be an exaggeration to say that Phoenix has been an unmitigated disaster from the day it launched. The system was programmed without fundamental features and is incapable of paying workers accurately or on time. An investigation made by the Auditor General in June of 2017 revealed that 51,000 employees had been underpaid or not paid at all, and were owed a total of $228 million, or an average of almost $4,500 per underpaid worker. Many workers are owed tens of thousands of dollars or more. Some have reported being placed on leave without ever having been asked. Still more have been overpaid and have been sent incorrect tax slips, disqualifying them from important benefits and tax credits.

The Miramichi pay centre employees have also felt the effects. Since the launch of Phoenix, the number of outstanding “pay requests” (meaning any request to the payroll centre, which can include fixing pay errors, requesting parental leave or overtime, or updates to employee information such as addresses and bank accounts) has skyrocketed, increasing by more than six times. The original pay advisors were highly skilled workers, who were trained to understand pay rules governed by more than 100 collective agreements with various unions, leading to complex payment structures, job classifications, and benefits. These workers were unceremoniously thrown onto the scrap heap and replaced with a workforce of less than half the size and with as little as four days of training. The Miramichi workers routinely complain of poor working conditions, low morale, and overwork. Stress, mental health issues, and absenteeism have become common.

The Liberals blamed “poor planning and implementation” for Phoenix’s problems, and made some hasty attempts at resolution. By the beginning of 2018, the government had spent $460 million to hire more temporary staff or shift staff from other responsibilities to work with Phoenix. Despite these investments, the backlog of unresolved pay requests has continued to balloon, reaching a peak of 633,000 outstanding requests in early 2018.

The original estimate for the cost of building Phoenix was $310 million, and it was supposed to save the government $70 million per year. It now has an estimated price tag of $1.2 billion! Though the original software contract was for $5.7 million, to date more than $185 million has gone to IBM. A former analyst at the Treasury Board Secretariat said that “IBM basically has an open bag of money to help themselves to.”

This is the fundamental logic of privatization. There is ample proof that privatization and contracting out leads to high costs and substandard services. A publicly managed service only needs to cover the costs of operation. A private corporation must also produce a profit. In order to keep their bids attractive and reduce costs, they cut corners and eliminate essential testing and regulation. Inevitably, it is the workers who pay the price.

All that the government has provided in place of a real solution is a paltry emergency pay system that is mired with as many problems as Phoenix itself. Workers have requested salary advances from the fund only to be made to wait for weeks, or longer, to be paid a small sum that can’t cover all of their expenses. Some have been denied access entirely as their request is not considered “urgent”. Up until this spring, many workers were required to pay back emergency funds before they had received all their back pay! Phoenix is a slap in the face to the workers who keep vital public services running, and the so-called “emergency fund” only adds insult to injury.

After it became abundantly clear that Trudeau’s half-hearted attempts to plug the gaps were having no effect, the Public Service Alliance of Canada (PSAC) and the Professional Institute of the Public Service of Canada (PIPSC), the two unions that represent the majority of federal public service workers, began organizing demonstrations and petitions in an effort to pressure the government to fix Phoenix. These efforts culminated in a national lunch-time walkout at the end of February, on the second anniversary of the launch of Phoenix. The walkout was organized around a number of central demands: for damages to be paid to workers who have incurred fines associated with the inability to make bill payments; for an end to repayment of overpayments before workers are paid in full; and for an increase in workers in the pay centres. Importantly, the PIPSC opposed privatization outright and demanded that Phoenix be replaced with a new system that is built by public service engineers. These demonstrations were highly attended by workers across the country, reflecting the anger and militancy of the rank and file.

The Liberals reacted to the pressure from these demonstrations and from the resulting media coverage, and announced that Phoenix would be scrapped and replaced with a new system. The 2018 federal budget allocated $16 million over two years to decide, in collaboration with “experts, federal public sector unions and technology providers”, what will eventually replace Phoenix. An additional $431.4 million was earmarked for investment over six years, which will eventually bring the number of workers in pay centres to 1,500, up from the original 550 that were hired in Miramichi in 2012.

The pay centre workers are being crushed under an avalanche of problems. They must process the existing backlog, address new pay requests, and account for new issues that arise when collective agreements are changed. The funding that the Liberals set aside to hire new pay centre workers has been spread over six years! Restoring sanity to the public service payroll could take years, a decade, or even longer.

Worse still, proposals to replace Phoenix are to be made in collaboration with “experts and technology providers”, which is a clear signal that they plan to keep the manufacture of the pay system in private hands. A second round of privatization would be a step backward! Hundreds of thousands of public service workers are learning hard lessons about what lies behind Trudeau’s “sunny ways” rhetoric. There is plenty of money on hand when the pockets of the bosses and bankers need extra lining. But when workers demand rightful payment for their work, Trudeau and his Bay Street cronies claim the cupboards are bare.

While the lunch-time demonstrations were an important first step, they have not yet had the intended effect. Larger and stronger mobilizations are the way to ensure that workers are paid their due. This was acknowledged by the leadership at the PSAC national convention, which was held in early May, when they committed to a plan of “escalating action” to pressure the government to finally fix payroll. However, in the months that followed the convention, PSAC began devoting its resources to a campaign to pressure Trudeau into launching a national public inquiry in an effort to hold government managers and agencies to account. Many workers are understandably skeptical of this approach. They have rightly seen that an inquiry will be an expensive, time-consuming process that will be unlikely to teach them anything they don’t already know, and it will do little to advance the struggle for fair and immediate payment.

The way forward is to build on the momentum of the lunch-time demonstrations. Some have demanded the organization of walkouts that move beyond the lunch hour and take up the full working day. This is a correct demand and would be the next logical step in an escalating action campaign. The union leadership must adopt this approach.

Workers must be paid now! PSAC and PIPSC should lead the struggle by adopting a demand for immediate payment for all workers who have been underpaid. This should take the form of a union-controlled emergency fund that is large enough to cover all outstanding back pay, as well as any anticipated future underpayments, until Phoenix has been replaced with a working system. After all, if Trudeau has more than $15 billion available to bail out the oil barons and buy an aging and unprofitable pipeline, there is more than enough in the coffers to compensate the workers who keep the wheels of the public service turning. If the government managers are incapable of handling their own finances, then it’s time for the workers to take over—the rank and file can do a better and more honest job of accounting. Not a penny should be repaid to the state until a working system is in place. 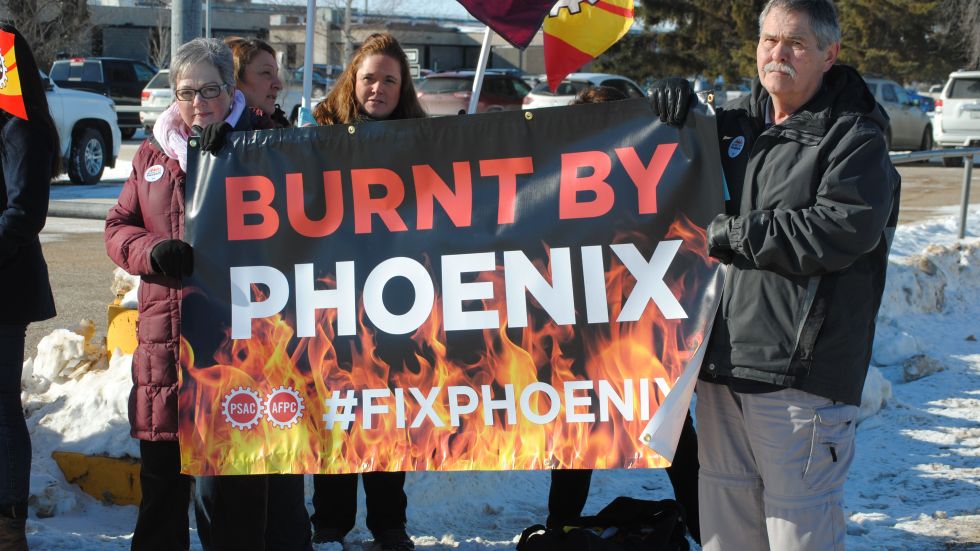 It is certainly true that modern technological improvements could have been made to the old payroll system that would have made it easier to use for all. But handing the direction of payroll over to privateers and bungling bureaucrats has caused chaos. Workers were perfectly capable of managing their own payroll before Phoenix was implemented. It is self-evident that the workers who do the work know best how the job should be done. All improvements to the payroll system should be made under the direction of the workers themselves.

However, Phoenix is merely a symptom of a much larger problem. There are numerous examples of how vast sums of public funds have been wasted or spent improperly. For example, this year the government spent $21.5 million on a rush order of smartphones, all so that departments could be “on budget” at the end of the fiscal year and executives could be paid their bonuses! Many departments, such as Veterans Affairs or Indigenous Services, consistently leave billions of dollars of budgeted funds unspent, despite the brutal austerity faced by members of these communities.

The capitalist state is in violation of its own collective agreements and even its own labour law! Workers can hardly be expected to show up to work if they aren’t getting paid. If the union leaders want to show they are serious about building a fight back against Phoenix they must make good on their escalating action plan and move the struggle back on to the streets. The leadership of the public service unions must reflect the anger and militancy that is expressed by the rank and file. If the union leaders are unwilling to fight, they must be replaced by workers who are.

The high attendance rate of the lunch-time demonstrations confirms that there is a clear desire among the rank and file to fight back. A national full-day walkout would send a powerful message. All workers should attend these walkouts, including workers who haven’t themselves experienced pay problems. It’s about time the state finds out exactly how strong the workers are when they are united and organized.