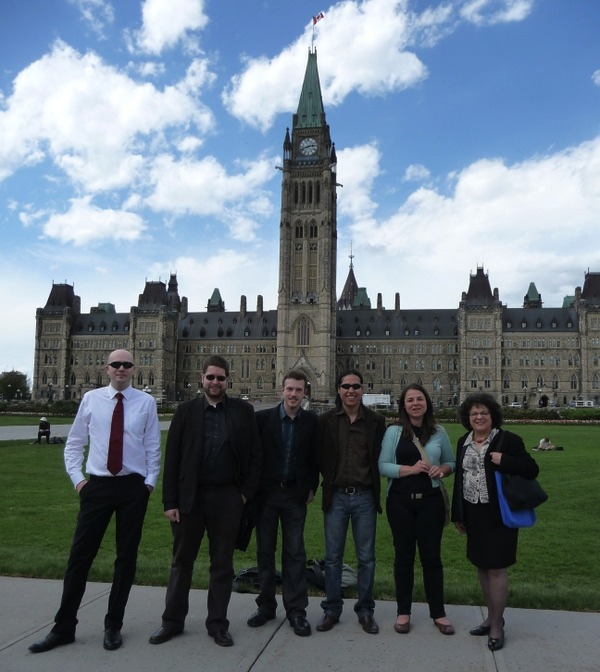 On Tuesday 4th May, representatives from HOV/SBQ in Montreal and HOV/CBLR in Toronto travelled to Parliament Hill in Ottawa to present on the human rights situation in Venezuela. Stéphanie Vaudry from HOV/SBQ presented very comprehensivley in French about the Misiones and the achievements of the Bolivarian government. Maria Paez Victor addressed the issue of human rights, the judiciary and the media.

While we were presenting it appeared that the Liberal and Conservative MPs were preoccupied, chatting with aides, fiddling with Blackberries, etc. Wayne Marston from the NDP called them out on it when he spoke. Our fears that they were not listening and had already decided their position was confirmed when Liberal MP Mario Silva called us a “Chavez fan club.” In response we called them out on their hypocrisy for not investigating the real human rights abuses in Colombia and Honduras.

The Bloc Quebecois and NDP MPs were much more open minded. The representative from the Bloc asked about the reforms and also why Venezuela was such a contentious issue. Maria replied that the key issue was oil, “if Venezuela produced potatoes and carrots, nobody would care.” Wayne Marston spoke about how he saw real fear of possible future coups and interventions and asked about the role of the Venezuelan military. Camilo Cahis reported on his recent trip to Venezuela where he saw how close the military was to the people and how this is an important defence against future military coups.

Russ Hiebert spoke for the Conservatives. In a question clearly forwarded from oppositionists he asked whether we have staff and where our money comes from. This elicited a few laughs from our volunteer activists. Stéphanie explained that we receive no government funding and rely on passing the hat at our meetings. Hiebert pressed us on whether we admit that there are any human rights abuses in Venezuela. Alex Grant responded that of course there are problems, no country is without human rights problems, including Canada. Stéphanie then explained the harassment dealt out by CSIS to activists in Montreal.

The full text that formed the basis of Stéphanie and Maria’s presentations can be read here (pdf, French) and here (doc, English) and we have included a summary below. You can also listen to the entire hearing here:

We strongly encourage other community organizations (Canadian and international), unions who have sent delegations to Venezuela, and individuals to send written reports in to the committee:

The report is set to be finished in September, just in time for the Venezuelan Parliamentary elections. There is a possibility that the Liberals and Conservatives are will use this as an opportunity to attack the Bolivarian revolution and if there is a wide response to this we will be able to turn this provocation around. It is ironic that they conducted this hearing into Venezuela on the exact day that the Liberals and Conservatives have moved to shut down discussion on Colombia free trade.

The human rights situation in Venezuela is complicated by the recognized bias and distortion in media reportage, as shown by the successful Ontario Press Council complaint against the Toronto Star.

Previous Venezuelan governments violated human rights with impunity.  Most notable was the Caracazo massacre of February 1989 where approximately 3000 people were killed.

In electing the Chávez government and reforming the constitution, human rights were put at the centre of the political and legal system.

The private media in Venezuela no longer even considers itself objective.  It is openly partisan and played a lead role not just supporting but organizing the coup of April 2002.

However, the overwhelming majority of the media is still in private hands.  But there has been a flowering of community media and freedom of expression. Venezuela has a body similar to Canada’s CRTC which has acted against media organizations that violate the media law which is similar to Canada’s.

Venezuela has a longstanding problem with corruption that pre-dates the Chávez government. The government has taken real efforts to drive out this corruption, which has unfortunately been characterized by the opposition as political harassment.

In previous governments, the police force was a repressive agency.  It has now been modernized and reformed.  For the first time in 40 years, there is no secret police in the country. Police are trained in crime prevention and human rights protection.  They are forbidden to have live ammunition during demonstrations and or strikes.

The Inter American Press Association and Human Rights Watch have criticized the Venezuelan government.  Both their analyses have been proven to show bias by international experts on Latin America and it is noticeable that both failed to denounce the 2002 coup against the elected government of Venezuela.

Venezuela is not a dictatorship.  In the last 11 years, the Bolivarian movement has won 14 electoral contests and lost one, which they recognized. All have been considered fair and transparent by hundreds of international observers, including the Carter Centre.