On the weekend of February 15th-16th, approximately 60 people participated in the fifth annual Marxist Winter School in Montreal, this year held at Concordia University. Organized by supporters of Fightback (Canada), La Riposte (Quebec), and the Workers’ International League (USA), this year’s school was certainly a big success. Activists traveled from Ottawa, Toronto, New York, and Boston to join comrades in Montreal for enthusiastic discussions throughout the entire weekend. Continuing the tradition from last year, the discussions were held in both French and English, facilitated through consecutive translation which highlighted the unity of English and French-speaking revolutionaries.

Saturday’s discussions began with a presentation on “Perspectives for World Revolution”, introduced by Fightback editor Alex Grant. Alex gave an in-depth explication of the continued economic crisis, which even bourgeois commentators admit could result in a “generation of stagnation and austerity.” The hypocrisy is especially glaring as statistics come out showing that 85 billionaires own more wealth than the 3.5-billion poorest, and that 99% of the profit made since 2008 has gone to this layer with the vast majority of the population being left out. Not even the capitalists have confidence in the system as they refuse to invest in production, instead preferring to borrow cheap money and to speculate on the market. This situation has been causing massive social explosions in many different countries around the world as workers and youth search for a way out of this blind alley.

Alex touched on the European crisis, explaining the gravity of the situation by mentioning the massive debt burden of the EU, the sluggish recovery in Germany, and the huge drop in GDP in southern European countries like Greece, Spain, and Italy. In the United States, the debt has reached enormous proportions with the government owing $16.7-trillion.  Alex touched on the question of China and whether it alone will be able to support the world economy.  If hard-hit workers in the USA and Europe cannot afford to consume, this severely limits the ability of Chinese manufacturers to sell their goods.  We are already beginning to see a slowdown in the Chinese economy, which will be a further drag on the global economy.

Drawing out the lesson that revolution does not march in a straight line, Alex explained that every mass movement sees ups and downs, advances and reversals. The general perspective, however, is of a further radicalization of the workers and youth. While there may not seem to be much occurring in some countries, even in these nations there are important political processes unfolding under the surface which will inevitably express themselves on a massive scale.  In Bosnia-Herzegovina, for instance, decades of nationalist divisions, with ethnic bloodshed and strife, tore apart the working-class movement.  However, class politics are now back on the agenda as the Bosnian masses have taken to the streets in a spontaneous outburst of anger against the present system.  This movement has spontaneously produced demands which cut across the pervious divisions and serves to unite the workers and youth regardless of nationality.  The ebbs and flows of the movement against capitalism have been most clearly seen in Greece and Egypt, but in neither country have the contradictions that gave rise to these movements been resolved.  This session was followed by a lively discussion with many comrades intervening on the situations in many different countries. 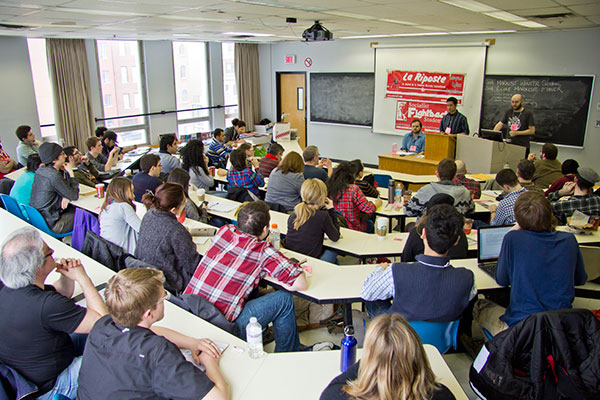 The second presentation on Sunday was given by John Peterson, editor of Socialist Appeal (USA), on the history of the Militant tendency in Britain. Speaking in French, John explained how a tiny group of Marxists around Ted Grant in the early 1960s were able to build the most successful Trotskyist group since the Trotsky’s Left Opposition. First and foremost, Ted Grant, basing himself on a solid Marxist analysis, was able to give an unshakable confidence to the small forces of Marxism at the time. While the post-war boom had caused most other groups to abandon the working class and its organizations, Ted oriented the Militant towards the Labour Party, and in particular the Labour Party Young Socialists. This was at a time when all other Marxist groups were abandoning the Labour Party and declaring it to be “bourgeois”. The Militant was able to recruit tens of thousands of youth to the LPYS and the best ones ended up joining the Marxist tendency. When there were big movements in society, the workers and youth generally moved through the Labour Party and ignored all of the small groups on the sidelines. By the early 1980s, the Militant was a household name with three members of Parliament elected under the Labour Party banner, control over the Liverpool city council, more full-time organizers than the Labour Party itself, and a membership in the thousands.

Following this intense day of discussions, the comrades retired to the Auberge Bishop hostel to eat, drink, and continue many inspiring political discussions from the day. Comrades from different cities were enthusiastic to chat with one another — to learn from their own experiences in order to help build the forces of Marxism where they are active.

On the second day, the comrades again met at Concordia University. The third discussion of the weekend was led-off by Fightback editorial board member Camilo Cahis who spoke on the topic of “Workers’ Control and Nationalization”. Camilo drew on the experiences from many different countries to elucidate his points. He argued very clearly that workers’ control, without addressing private ownership of the means of production and political power, is not and cannot be a goal in and of itself. Workers’ control, by itself, does not overcome the contradictions of capitalism and the private market.  The experience in Venezuela, for instance, has shown the limitations of building “islands of socialism in an ocean of capitalism.” He showed that workers’ control is a transitory stage on the road to socialism, and that the only way to guarantee workers’ control was to link it to the creation of a workers’ state and a nationalized planned economy. Camilo also explained how Trotsky wrote extensively on this subject as he polemicized against the Stalinists who claimed that workers’ control is only possible after the seizure of state power. Trotsky argued that it is precisely the experience of workers’ control that enables the workers to run the state and the economy. This presentation was followed by an involved discussion the people bringing in examples from Latin America, Yugoslavia, Scandinavia, the United States, and Canada.

This was followed by closing remarks by Joel Bergman of La Riposte in Quebec and a lively singing of the Internationale.  The fifth edition of the Marxist School revealed the great enthusiasm and abilities of the young comrades in eastern North America, as they look to inject Marxist ideas into the North American labour movement.

Join us next year!

For more pictures from the school, check out our Flickr page!