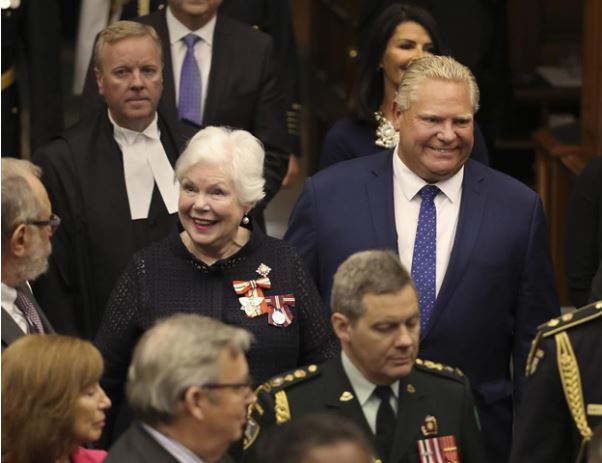 A feud has erupted between Doug Ford and Justin Trudeau over the issue of immigration. Doug Ford has used a Trump-like discourse, blaming “illegal” immigrants and asylum seekers for societal ills, claiming that, “This has resulted in a housing crisis and threats to the services that Ontario families depend on.” At the end of July, the Ford government went so far as to send a $200 million invoice to the federal government. claiming costs of helping asylum seekers.

The spat between the two governments has continued throughout the summer and has even spilled over into Saskatchewan, where that provincial government is now also claiming that the federal government owes them money for housing asylum seekers. This feud between the federal government and certain provinces over the issue of immigration will only get worse if the anti-immigrant CAQ is elected in Quebec in October, or if the Jason Kenney-led United Conservatives win the Alberta election next May, both of which are likely.

The conflict has also gained traction on the federal level, with Andrew Scheer’s Conservatives releasing an attack ad – that was quickly pulled after being labelled racist by critics. 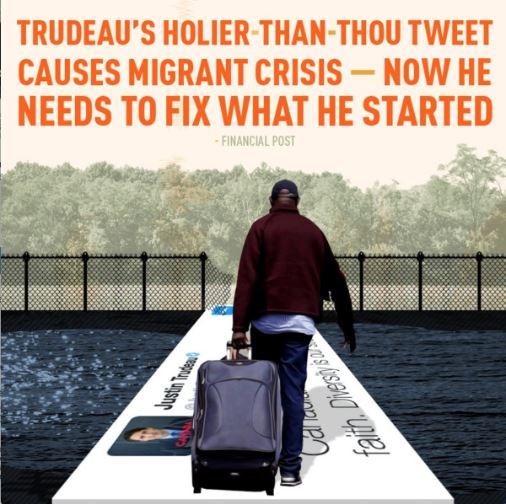 Media outlets such as the CBC, The Globe and Mail, and the Toronto Sun have fallen into repeating terms used by Doug Ford and far-right groups, especially the term “illegal border crossers”. Even Trudeau incorrectly used the term “illegal” in relation to irregular border crossers on April 2018. However, even according to international law, there is technically no such thing as an “illegal” border crossing when a person crosses into Canada at any point along the Canada-US border to claim asylum.

“‘There’s nothing illegal when you come and you cross an international border to claim asylum,’ said Jean-Nicolas Beuze, a representative from the UN High Commission on Refugees. Canada’s Immigration and Refugee Protection Act (IRPA) is ‘very clear’ on that fact, he says.”

This right under international law was meant to facilitate the movement of people fleeing persecution after the experience of the Second World War. The use of the term “illegal” allows the Conservatives to paint asylum seekers as criminals who are unfairly cutting the line in front of those using Canada’s regular immigration pathways. 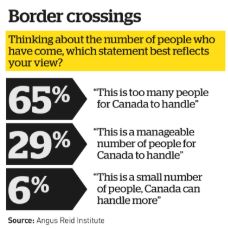 The main point that right-wing politicians have been making is that the provinces already have overstretched social services and a lack of affordable housing, and therefore cannot “handle” the influx of asylum seekers. The Conservatives have cynically used this argument to dupe ordinary workers with legitimate concerns about housing, jobs and access to social services. Their success in doing so was shown in an Angus Reid Institute poll released in August 2018, which showed that two-thirds of Canadians agreed with the statement: “This is too many people for Canada to handle”.

The debate is being framed as a mere dispute over whether the province or the federal government should pay to house the asylum seekers. This echoes similar comments by Parti Québécois leader Jean-François Lisée in 2017 when he said that Quebec shouldn’t have to pay for “Trudeau’s guests.”

But framing the dispute in this way is only shifting the blame. It is true that affordable housing all over Canada has been stretched to the limit. For instance, there are currently 100,000 households on the waiting list in Toronto alone. What is not mentioned by either the Conservatives or the Liberals is that decades of underfunding from the both parties’ governments are to blame for the affordable housing crisis, as well as the crisis in the public services. Both political parties, at both the provincial and federal level, have refused to seriously address these issues, instead choosing to implement cuts which benefit the rich at the expense of working people. There is more than enough wealth in society for everyone to be able to access affordable and quality housing, good-paying jobs, and well-funded, high-quality public services. The blame for these crises are now conveniently being pinned on asylum seekers, instead of the parasites who created these problems in the first place.

In this drama, the Liberal Party has entered the scene to assume the moral high ground, positioning itself as the defender of human rights and law and order. The Huffington Post reports: “‘Canada will continue to ensure its immigration and refugee system is applied responsibly’ Trudeau said, adding it’s ‘important’ for leaders to protect how Canadians generally view immigration ‘very positively.’”

Federal governments have long played up Canada’s law-abiding and humanitarian image, but this claim of Canada being a peacekeeping nation stands is in stark contrast to reality. The Trudeau Liberals in particular have increased military spending and made a $15 billion arms deal with Saudi Arabia, policies which fuel the conflicts that force refugees to flee their homes.

In 2015, the Liberals cashed in on their promise to bring 25,000 Syrian refugees to Canada by the end of the year with photo ops and overtures to Canada’s identity as a refuge for those fleeing war with their slogan “Welcome Home”. But this was a drop in the bucket compared with the nearly one million Syrians who sought refuge in Europe in 2015 alone. The Liberals’ plan of resettlement also caved into racist stereotypes about Muslim men being dangerous when it explicitly excluded any single men from being able to come to Canada. 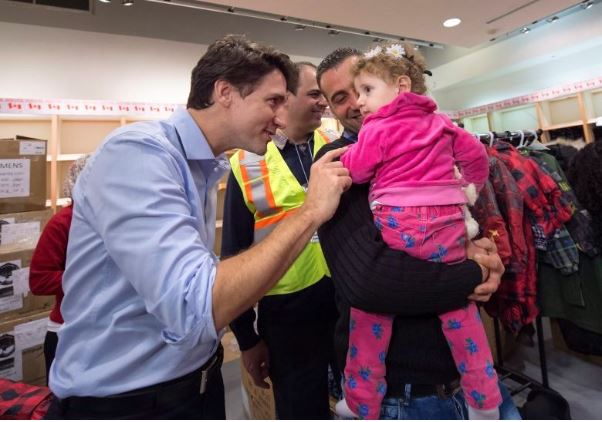 Canadian Prime Minister Justin Trudeau speaks with a young girl as he greets a family of Syrian refugees during their arrival at Pearson International airport, in Toronto, on Friday, Dec. 11, 2015. (Nathan Denette/Canadian Press)

The Liberals like to portray Canada’s immigration system as being generous and inclusive. In fact, it is highly selective and primarily geared towards serving the profits of the Canadian bosses. The Canadian points system is skewed in favour of skilled workers and “investor class” applicants who are given a fast-track option, while unskilled workers are largely forced into temporary streams where they are made to work precarious jobs with little to no hope of a pathway to citizenship. This precarious work often means low wages, poor conditions, and little unionization. It is no wonder that Donald Trump has stated that he wishes to emulate the Canadian immigration system.

While Trudeau has gone to great lengths to portray himself a progressive friend to immigrants, refugees and asylum seekers, his hypocrisy stands out with regards to the Haitian asylum seekers. Haitians have been fleeing the United States after Trump announced that he would be lifting their temporary protected status last year. A November study indicated that of all Haitian asylum applications in Canada, 90 per cent were rejected. Another more recent study from June showed that only nine per cent were approved. All talk aside, the Liberals have shown in practice that they agree with the Conservatives that asylum seekers should not be allowed to stay.

The problem is capitalism

As capitalism makes life for working people increasingly difficult, political polarization will increase. The liberal centre can offer no explanations for the deteriorating wages and living conditions, but instead offers simple cosmetic changes which lead to no real change in most people’s lives. Right-wing populism takes advantage of this by offering alternative explanations for the worsening conditions of working people: that immigrants “are stealing Canadian jobs”, that “illegal migrants are putting stress on public services”, and so on.

Right-wing populism provides a useful tool for the bosses and bankers who increasingly find the need to divide the workers in order to distract them from the real root cause of their problems—capitalism itself. This debate shows that Canada is not immune to those political tendencies which are a reflection of the crisis and the polarization occuring in society.

From the United States to Ontario, it has been proven that establishment politics cannot defeat right-wing populism.

The affordable housing crisis and crisis in public services is real, but asylum seekers are not to blame. These crises are the direct result of decades of Conservative and Liberal governments putting the profits of the bosses before the lives of working class people. The solution is neither the xenophobia and division advanced by the Conservatives, nor the hypocritical posturing of the Liberals.

Instead, to defeat the right wing, the mass organizations of the working class—the trade unions and the NDP—must provide a bold anti-capitalist message, placing the blame where it ought to be laid. It is essential to fight against the racist dog whistle politics of the Conservatives which only seeks to divide us. Only a bold socialist message can foster solidarity between all workers and unite us against the common enemy. Only when the economy is controlled by ordinary workers can we provide affordable housing for all, full employment and decent wages, and funding for public services. Canadian workers have far more in common with immigrants and asylum seekers than they do with the Canadian bosses or their representatives in the Liberal and the Conservative parties.