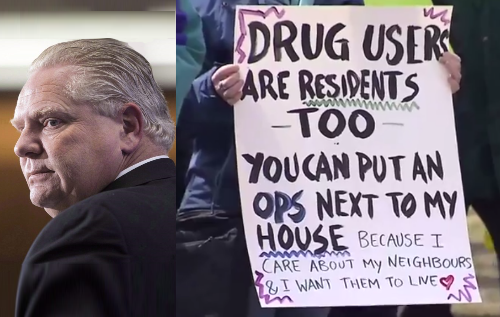 In late March, the Ford government announced cuts to provincial funding for lifesaving overdose prevention sites. These cuts come amid an opioid epidemic in Ontario that continues to take hundreds of lives every year.

Ford has so far rejected approval for six supervised injection sites in Ontario, denying them provincial funds and making it near impossible for them to continue operating. Evidence shows that supervised injection sites save hundreds of lives every year. Their closure will inevitably result in an influx of opioid-related deaths. Toronto’s Medical Officer of Health, Dr. Eileen de Villa, recently stated that The Works, a supervised injection site located in Toronto, had more than 40,000 visits since August 2017 and has reversed some 750 overdoses. The Works is just one site under threat of having its funding withdrawn. Nurses, social workers and other advocates have warned that, amid the current opioid epidemic, extensive increases of funding and services are needed in order to save lives. Under Ford, the exact opposite is happening.

According to the Public Health Agency of Canada, over 10,000 Canadians have died from opioid-related causes in the past three years. In the first nine months 2018 alone, there were 3,286 opioid related deaths—an increase from the previous year. Public Health Ontario (PHO) recently released data showing that 629 people in Ontario died from opioid-related causes between January and June of 2018. According to CATIE, a disease treatment think tank, 92 per cent of the opioid related deaths in Canada in 2017 were accidental. This is often due to street drugs being mixed with other high potency drugs, such as fentanyl, without the user’s knowledge. Most disturbingly of all, one in every eight deaths of those between the ages 25 to 34 years old in Ontario are related to opioid use, according to the Centre for Addiction and Mental Health.

Overdose prevention sites have had life changing effects for those they serve. The treatment provided reduces harm related to drug use, by doing things like providing drug users with clean needles and tools for overdose prevention, while also putting the most vulnerable in contact with healthcare professionals. The lifesaving impact of these facilities is widely known. Ford’s cuts, however, are not based solely on ignorance, but are part and parcel of his drive for austerity in favour of Ontario business.

Ford has repeatedly stated that “efficiencies” (ie. cuts) are necessary in order to plug Ontario’s multi-billion dollar deficit. However, the task of filling that gap has been decidedly one-sided. While Ontario’s most marginalized have been asked to swallow cuts, Ford’s rich friends have benefited from tax breaks totaling hundreds of millions. The Conservatives have no problem stiffing workers and students to this end, let alone those suffering from drug addiction. In the eyes of the capitalist, all things, human lives included, can be measured in dollars and cents. To most people, an easily preventable death is a tragedy. To the capitalist, it is in an unfortunate but necessary expense.

This callous disregard has not gone unnoticed. Numerous protests have been held in recent months, from Toronto to Oshawa, where hundreds have gathered to voice their disgust with Ford’s cuts to prevention sites. The labour movement would be wise to support these demonstrations. Drug addiction is not a fringe issue. Every drug-related death is a blow to the community that person belonged to, and every worker knows it could just as easily be his or her family member or friend who falls victim to addiction next. Moreover, the cuts to overdose prevention are merely a part of a generalized attack on the services workers rely on. As the saying goes, an injury to one is an injury to all.

Organized labour must unite with affected communities to resist cuts to services, and do everything in its power to stop them. In the final analysis, the drive for austerity won’t end until the Ford regime is brought down, as well as the rotten system he represents. Unity and militant action are the first steps in this direction.