Ford attacks low-income students: only a student strike can stop him 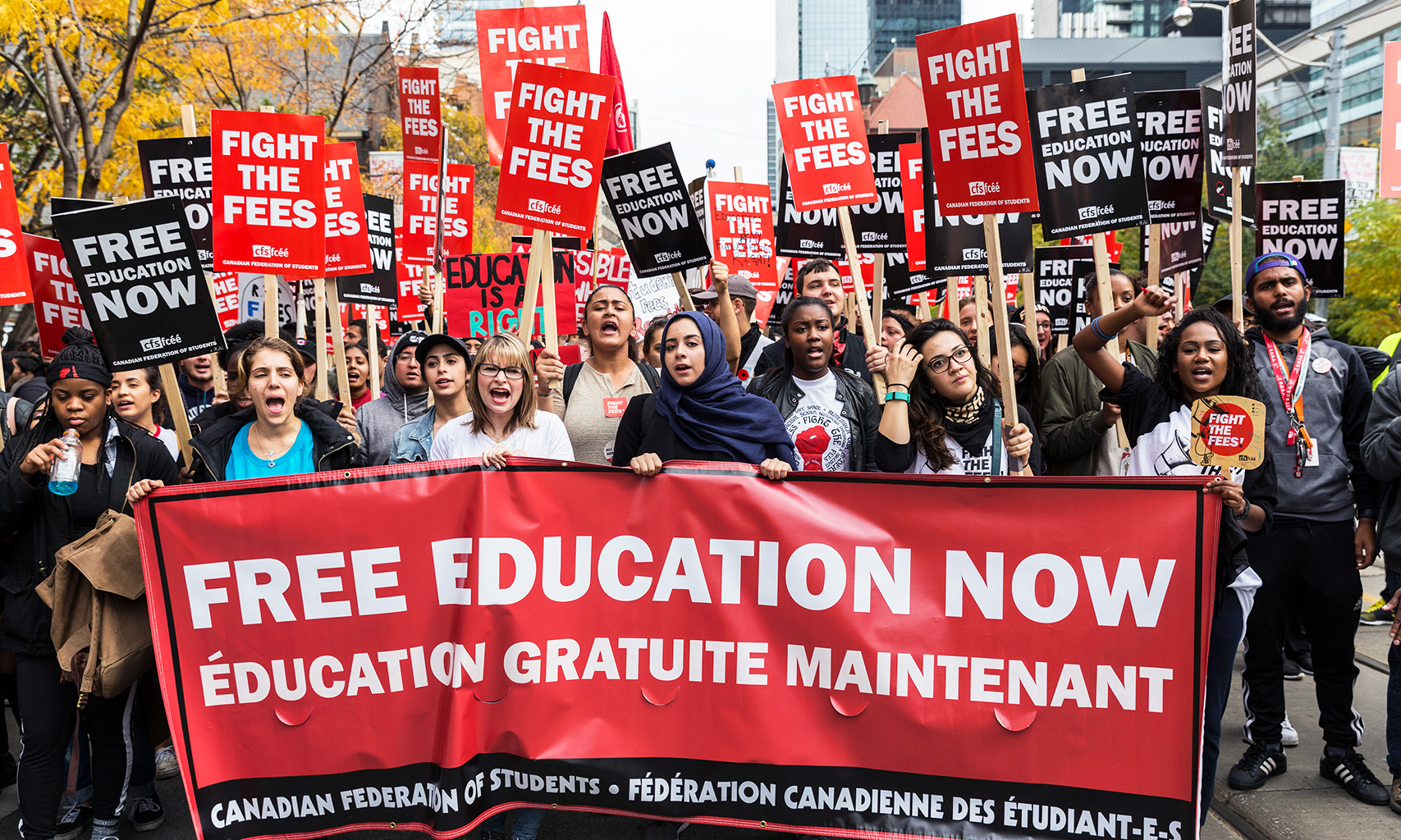 In mid-January, the Ford government leaked news that it would be reducing tuition fees by 10 per cent across Ontario. The decision was immediately met with suspicion by students. Their suspicion, it turns out, was justified. A few days later, the bait-and-switch was finally revealed. Low-income students will face significant reductions to the grant that effectively provided them with free education. The six month interest-free grace period on student loan repayment after graduation will be abolished. In order to stop students from fighting back, student union financing will also be undermined. More than ever, the Ontario student movement needs to begin preparations for a student strike—or risk being destroyed.

The details of Ford’s decision are now becoming clear. Apart from the tuition reduction, the government announced that it will be ending the grant which provides free education to students from families earning under $50,000 a year, and drastically reduced costs for students from “middle income” families. Those grants will now be replaced, in part, by loans. In a largely symbolic move, the cutoff for the grant, previously $175,000 in family income, will also be reduced to $140,000.

The Ford government promptly congratulated itself for putting “more money in the pockets of Ontario students and families.” This is a barefaced lie. In truth, the elimination of student grants will deal an enormous blow to lower income students, sending them into debt when just yesterday their education was free. For them, the reduction of tuition fees by 10 per cent is hardly a consolation. A modest reduction in tuition, after all, means little when compared with the enormous cost of loans and interest. The only beneficiaries will be students from wealthy families, who found no need for grants, but will now pay less in tuition, regardless. The end result is a net transfer of wealth from the poorest students to the richest. “More money in the pockets of students” indeed…so long as your parents happen to be rich.

The full impact of Ford’s decision doesn’t end there, however. The reduction in tuition fees will also leave a gaping hole in university revenue. According to one estimate, the cut will result in $360 million less in revenue for universities, and $80 million less for colleges. The government has already indicated that this gap will not be filled by increased operating grants. Most institutions will therefore enact drastic service reductions in order to fill the hole. This could result in increased class sizes, closure of student facilities, or the outright elimination of student programs. It also puts the wages and conditions of campus workers on the chopping block, in an attempt to pit students against workers.

To add insult to injury, the government has also introduced a “Student Choice Initiative,” which they claim will empower students “to choose which student fees they want to pay and how that money will be allocated.” The government has indicated the walksafe programs, health and counselling, and athletic programs will remain mandatory. What then does that leave? Ford sees no reason to hide that answer. The government statement indicates that students will no longer have to “pay for services they do not use and organizations they do not support” (my emphasis).

What other “organizations” can this refer to, other than student unions, student media and campus clubs? The purpose of Ford’s “Student Choice Initiative” suddenly becomes clear: The government is looking to undermine the funding of those very organizations which have opposed its policies on campus. In reality, these fees are inconsequential when compared with the cost of education, now made even more costly for many by the government. But this of no concern to Ford. His intention is not to save students money, but to settle political vendettas under the guise of “student choice.”

The right wing will argue that students shouldn’t be forced to fund organizations they disagree with. The reality is that, much like with trade unions, the decision to form and fund the student unions was democratically agreed upon by the student body in the past. Individuals opting out of a student union is almost akin to opting out of paying taxes because you do not support the policies of the government. As fees become optional, student unions will slowly find themselves short of funds, calling their very existence into question. Campus clubs too will soon find themselves short of resources, leading to a steep decline in the quality of campus life and student advocacy. To Ford, this is just the inevitable collateral damage as he deals what he hopes will be the deathblow to his opponents on campus.

Ford’s actions should come as no surprise. This is the same man who instituted an anti-protest law against student activists, cancelled three planned university campus expansions, and only recently slashed $25 million in funding for school programs. This is just the latest episode in the Ford saga, and no one can imagine it stopping here.

The government has gone on the warpath. They will continue their attacks on working class students, their rich patrons cheering them on, for as long as they are able to do so. The only thing standing in his way are the student unions. However, up until now, the unions have limited themselves to harmless lobbying campaigns, none of which helped in the slightest to prevent Ford’s latest attack, and only fed into student disillusionment with them. But even this is not enough for Ford. The “Student Choice Initiative” indicates that their very existence poses a potential threat to Ford, and he will not rest until this threat is neutralized.

Let us be perfectly clear: should Ford get his way, it may very well spell the end of student unionism in Ontario. Should this happen, it could be years before it ever recovers. Students would find themselves unrepresented and thus open to further attack. The stakes are too high for inaction.

Therefore, we appeal, with renewed urgency, for the Canadian Federation of Students to begin laying the groundwork for a fighting campaign against the Ford government. This should begin with a one-day province-wide student strike, with an aim to reversing Ford’s attacks, defending student unionism, and demanding free education and the cancellation of student debt for all. This campaign must unite with campus workers, demanding that any reduction in revenue is offset by the government, and that there be no cuts in service or wages. The years of lobbying have proved ineffective at best, and harmful to student morale at worst. Only by mobilizing our vast reserves of strength, the hundreds of thousands of angry students and campus workers across Ontario, can we bring an end to the Ford regime and its duplicitous agenda.

Ford is attacking every sector of the working class: Minimum wage workers, students, LGBTQ, Franco-Ontarians, immigrant communities and unionized workers. Each of these groups need to rise together to bring down this hateful regime. A student strike could very well be the spark that sets off a wider movement. It’s time to make this into a reality.

Sign the petition for a student strike against Ford’s education cuts here.