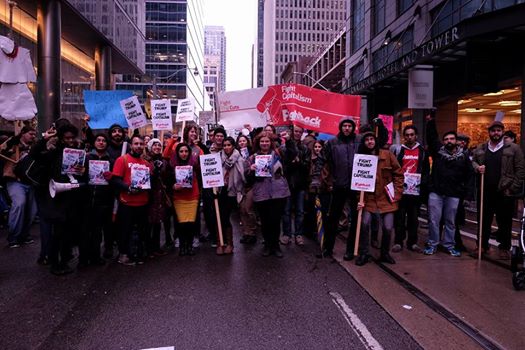 In the weeks since Donald Trump was elected president of the United States there has been a massive response from workers and youth who are disgusted by his bigoted politics. Canada is not immune to the impact of the these events, and there has been a wave of politicization as Canadians look for ways to resist the racism, misogyny, xenophobia and homophobia that Trump represents. Fightback has been providing the answer to this question, organizing public events, discussions and interventions, gaining an audience among the many who are realizing that Trump and his kind cannot be defeated by the same establishment politics that spawned him, and that the only way forward is to fight for socialism.

A week after the election, Fightback editor Alex Grant spoke to a packed room of over 65 students and workers at York University on “How We Can Defeat Trump”. With higher than expected attendance, the event was standing-room only. In his presentation, Alex explained how years of declining standards of living gave rise to the mass discontent that found its expression in either Donald Trump or Bernie Sanders. However, as Sanders found after his capitulation to the Clinton camp, establishment politics cannot beat right wing populism, and a bold socialist program is needed to win over workers and push back the forces of reaction. A wide-ranging discussion followed, and though it covered many topics, everyone agreed that liberalism is no match for Trump and socialism provides the answers that liberalism cannot.

On Saturday, November 19, Fightback participated in the Rally Against Trump in Toronto. Kicking off the rally in Nathan Phillips Square, comrade Marco LaGrotta led a crowd of over 1000 protesters in chants of “One solution – revolution!” He spoke to the crowd about the need to organize and fight for socialism as an alternative to Trump’s demagoguery. His speech earned an overwhelmingly positive response from demonstrators (as well as the attention of right-wing media). The same point – that you need socialism to beat Trump – was echoed by other speakers at the rally such as Ontario NDP MPP Cheri DiNovo and former Ontario Federation of Labour President Sid Ryan, indicating the impact of the ideas that the Marxists have been advocating. Comrades were well-received by protesters, selling 100 papers and leading chants during the march to Trump Tower. Fightback was clearly the largest and best organized contingent at the demonstration (a fact which was not missed by CityTV’s news coverage).

Video of Marco’s is here:

Later that day, Fightback comrades, supporters and people we’d just met at the rally, converged at the Duke of Gloucester to discuss where the movement needs to go next – that is, the need to organize. With approximately 60-70 people in attendance, Fightback took over the pub, displaying our banner on the wall and filling the air with Marxist ideas. It was not so much the successful end of a successful day, but rather the promising beginning of a new wave of struggle.

In Montreal, Socialist Fightback organized an event entitled “How to Defeat Trump?” at McGill University. The bilingual event brought together both Anglophones and Francophones from many universities. The clear desire for answers was demonstrated by more than 120 people who packed into the small room on McGill’s campus. This is the most successful event that Socialist Fightback has ever held at McGill and is a reflection of the growing interest in socialist ideas and a desire to fight back against the reactionary politics of Trump.

The event gained so much attention that many student journalists from different campuses were present to cover it. In addition to this, CBC Radio was also present and their coverage of our event was aired the next morning on their Daybreak segment. Coverage of the event in the McGill daily can be found here.

People started arriving at quarter past six, hoping to get a seat in what promised to be a packed room. Socialist Fightback comrades arrived early and were already prepared to greet attendees as they arrived, offering them the latest copies of our Canadian magazines Fightback and La Riposte socialiste, as well as the latest copy of the American Marxist journal, Socialist Appeal.

The event began with a presentation by Joel Bergman of the Fightback editorial board. Bergman explained that the American election was not a normal election and was not taking place during normal times. He illustrated that the backdrop of this election is the crisis of capitalism which began in 2008. This crisis has led to the general political impasse which is shaking every country around the world. Youth and workers have become angry and disillusioned with the political elites who have overseen an immense transference of wealth to the 1%, and a rise in inequality and poverty. This manifested itself in the polarized nature of the presidential primaries which was represented in the rise of two anti-establishment figures, Donald Trump and Bernie Sanders.

One of the major aspects that this election proved, is that you cannot beat right-wing populism with the status quo establishment politics represented by people like Hillary Clinton and the Democratic Party. Workers and youth, frustrated at the increasingly desperate situation facing them had no genuine outlet to express their discontent. Bergman’s presentation concluded with a call to action, a call to the left, to the worker’s movement, the unions and the student unions to join the fight for socialism and to break with the bourgeois party establishment in order to provide a real solution to millions of people. This is the only way to fight against the rise of the right-wing, reactionary rhetoric of politicians like Trump on a global scale.

The rise of a racist and sexist demagogue as leader of the most powerful country in the world has forced people who were previously apathetic towards politics to enter the political scene. The goal of this event was to reach out to these people and to expose the failure of the two-party establishment, and the capitalist system that these parties defend in the US. While surprising, it is not enough to be shocked by the Trump presidency. It is no longer permissible to sit on the sidelines. We need to provide bold socialist solutions to the aspirations of workers and youth and inspire them to get active and organized.

In the wake of Trump’s election, a new layer of workers and youth are becoming radicalized and questioning capitalism as never before. More than ever, people are open to Marxist ideas and are searching for ways to organize. Fightback is providing a clear program for dismantling the system that gave us Trump. There has never been a better time to be a Marxist. Join us in the fight against Trump and everything he represents!