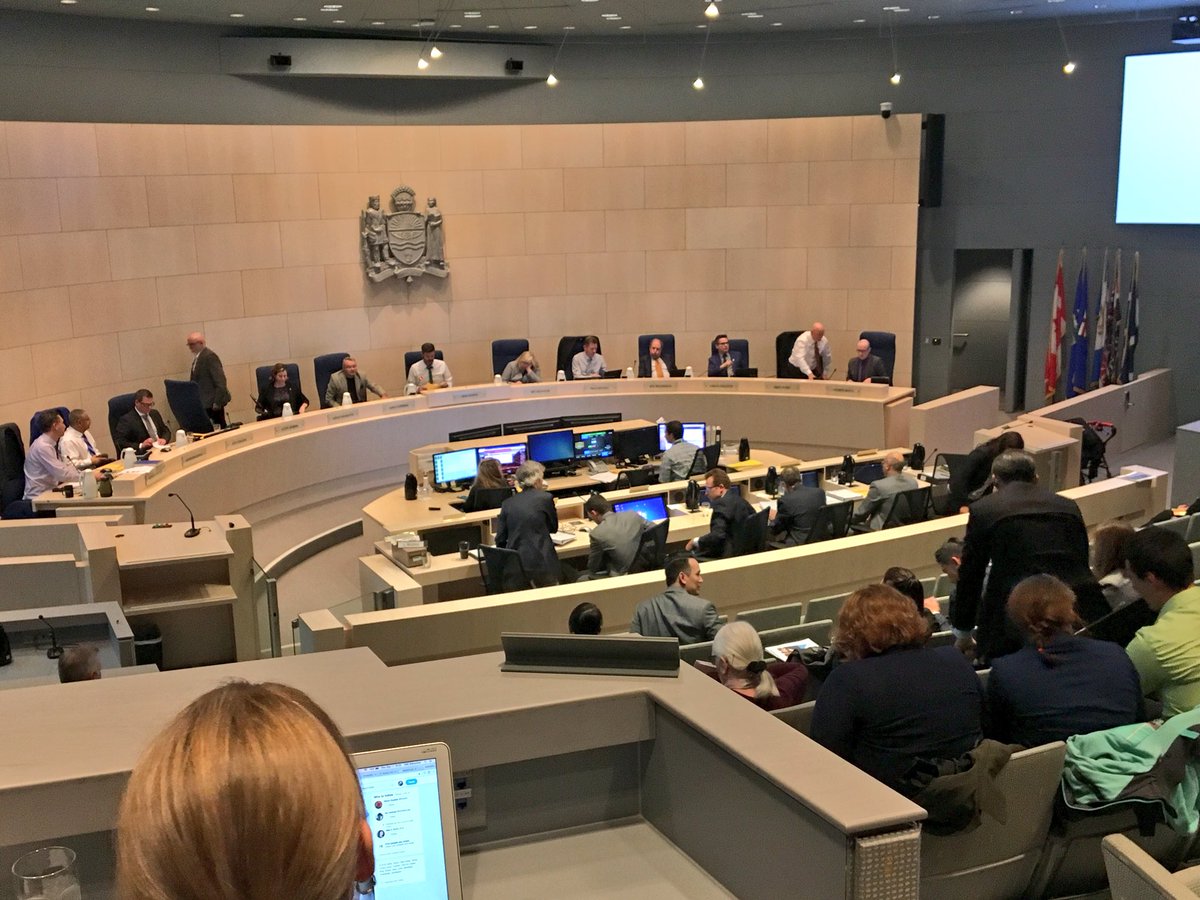 Edmonton City Council recently passed its 2019-2022 municipal budget—and austerity is on the menu for the next four years. Mayor Don Iveson himself admitted that this was the hardest budget passed in more than a decade. What will follow are cuts in services and programs reducing their overall quality, putting a heavier daily workload on city workers, and imposing higher living costs on Edmonton residents. Property taxes will be raised by 2.6 per cent each year over the next four years, which will affect homeowners and renters alike. Homeowners will have to dig deeper into their pockets while renters will almost certainly see a spike in their rent as landlords offload the cost of tax increases onto their tenants. Bus fares will also be increased from $3.25 to $3.50 per ride. The original proposal was to increase the bus fare to $4.00 by 2021. City council was forced to withdraw from this “ambitious” proposal given negative public feedback. They will reassess a further hike at the end of this year.

Councillors claim that the public was consulted about these new measures. In reality, they did everything they could to make these consultations inaccessible to workers. Most of the consultations with local communities were held during weekdays and in the middle of the work day, leaving most working people unable to attend. Such inconvenient scheduling was no mere bureaucratic oversight, since it happens time and time again.

Edmontonians who were able to attend these so-called public consultations and city budget meetings would have only witnessed the ineptitude of the city councillors. One Edmonton Journal writer dubbed these council meetings “budget bingo” to highlight how the council decided their funding priorities. In past years, the city administration was tasked with providing the city council with recommendations on how to prioritize the budget based on previous studies. This year is different. Due to the budget deadlock, as well as the constant bickering between councillors over their own pet projects, the city clerk determined the priority list in a completely random manner. Working class livelihoods are quite literally being left up to a roll of the dice.

It is a fact that Edmonton is short of money. However, whenever a rich investor comes into town promising to create jobs, on the condition that the city covers part or all of the cost of their investment, the municipal government is right there, cash in hand. One such investor is billionaire Daryl Katz, owner of the Edmonton Oilers hockey team. In 2014 the City of Edmonton paid almost half the cost for the construction of Rogers Place, the new home of the Oilers. Even though this arena is owned by the city, all the revenues would go to Daryl Katz.

This selective use of municipal funds is just one example of city council’s glaring hypocrisy. Time after time, we are told that we need to privatize public services to save as much money as possible. A year and a half ago, the city made a proposal to privatize part of the Edmonton Transit System (ETS) to save money. This privatization would put part of our transit system in the hands of individuals whose only motive is to collect profit for themselves. The attempt was thwarted by the actions of ETS workers and community members, who rallied against this proposal to save their jobs and the bus routes that would have been cut.

Edmonton’s Chamber of Commerce and business community have placed pressure on the city to not increase property taxes on businesses, arguing that it would hurt profits. Instead, they sent the city council a list of their own suggested measures. Unsurprisingly, this list called for cuts and privatization of public services, in order to avoid raising property taxes on businesses. This cry to privatize is not isolated to Edmonton. Calgary’s city council, facing their own budget deficit, has decided that there is no other choice but to privatize and contract out some of the city services to save money. This comes at a time when the city has also raised their residential property taxes by 3.45 per cent. Meanwhile, three municipal unions in Calgary have been without a contract for a year as the city seeks to implement a wage freeze.

Two major municipal unions in Edmonton, the Civil Service Union (CSU) and the Amalgamated Transit Union (ATU), have come out against the cuts. The two unions released a report that highlights how front-line workers have been reduced and have been taking on an increasing workload. Further cuts will exacerbate these dire situations. Meanwhile, senior and mid-level management positions have ballooned.

Amid these budget discussions one question has been left out: why does Edmonton have a deficit? Over the past few decades, the costs of municipal services and infrastructure have been increasingly downloaded from the federal and provincial levels to the municipal level. In that time, higher levels of government have provided a trinket allowance to municipalities that does not match the costs of running a city and population growth. This means the funding that cities receive is less than it was 10 or 20 years ago. The city is forced to rely primarily on property taxes as well as fees and fines.

Attempting to manage austerity or cherry-picking between small pet projects is not the answer. The only lasting solution is to have the costs of the municipalities taken on by the provincial or federal government once again. The provincial government will argue that Alberta is also facing a large deficit and therefore unable to shoulder the costs. Indeed, Alberta alone is poised to run a $7.5-billion deficit in 2019. While the Alberta NDP government has not unleashed a program of deep austerity, they have made some cuts, such as wage freezes for teachers, nurses and public sector workers. Does this mean that the money to fund municipal services is not there? No. The money is there, in the hands of the rich, the bosses, the profiteers, the capitalist class, who call for the privatization of public services and assets. These are the very same people who told city council not to increase property tax on businesses, who possess more wealth than entire cities and even provinces combined.

A militant struggle has to be waged by working class organizations to demand that portions of city budgets be uploaded back to the provincial and federal budget. At the end of the day, the only long-term solution is for the working class to wrest the immense wealth of society from the parasitic capitalist class. Under the direct and democratic control of the working class, this wealth can be managed collectively to fund all services and programs. With workers at the helm, we could use these immense riches to roll back the austerity measures that have been inflicted, such as the hike in transit fares, but also provide free public transit, a reduction in residential property taxes, and better wages and working conditions for city workers.