“Doug Ford has got to go!”: high schoolers walk out against school cuts 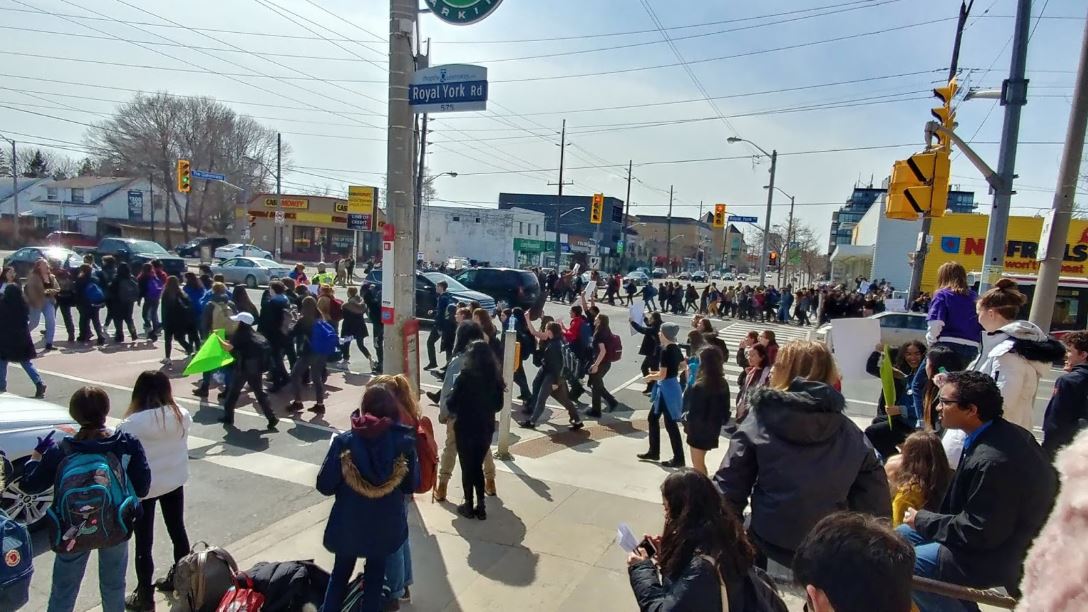 On April 4, an estimated 100,000 high school students, from more than 700 schools across Ontario, walked out of their classrooms in the largest demonstration yet against Doug Ford’s austerity agenda.

The walkout movement took off after cuts to public education were announced that will result in lost teaching jobs, increased class sizes, and loss of services for students in special education. Spearheaded by students themselves organizing under the banner of #StudentsSayNo, the campaign spread via social media. Organizers are adamant that students will not be passive in the face of cuts that will have such a profound effect on their lives.

At Etobicoke School for the Arts (ESA), Fightback activist and student Sky Grannum led their classmates in the walkout. Both as an arts school, and a school with a disproportionate number of students with special needs and on Individual Education Plans, ESA will be particularly impacted by the cuts, a fact recognized by many students who fear their school could face closure.

“Doug Ford is making an irresponsible decision. It’s going to affect a whole generation,” said one student, when asked how they felt about the cuts. They also spoke about how the cuts would serve to grind down students who are already at a disadvantage, and create a two-tier education system—one for those who can afford private schools, and one for everyone else.

In their speech to their classmates, Sky said, “Education minister Lisa Thompson claims that larger class sizes will make students more resilient. You know what, Lisa? I think we look pretty resilient right now! And we’re going to have to stay resilient if we want to be able to fight back. But we’re not alone. Ford continues to attack every vulnerable person, every marginalized group in Ontario. Only by uniting can we have our voices heard. Only through collective struggle can we imagine a world where we don’t have to worry about our futures.”

In a demonstration of these words, the ESA walkout then linked up with the walkouts taking place at the nearby Bishop Allen Academy and Karen Kain School of the Arts, marching to the busy intersection of Royal York and the Queensway. Students marched around the intersection with chants and signs, to raucous cheers and honks of support from passing drivers. The overwhelming message was clear: Doug Ford has got to go!

Students marching at Royal York and the Queensway:

The response of the Ford regime to the walkout has been to dismiss the movement. The Toronto Sun declared, “Your kids are being used as political pawns,” and that they’ve been “goaded on by their teachers.” Ford has even veered towards conspiracy theory, alleging, “This isn’t about class sizes, I’ll tell you; this is about the union bosses telling the teachers and the students what to do.” 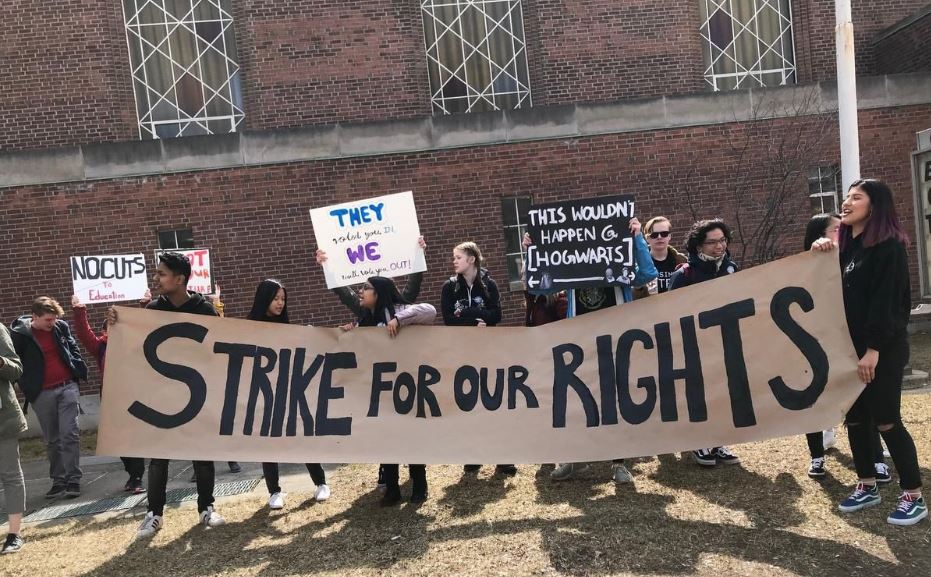 Such claims are deeply insulting to the youth who are getting involved in the movement due to their own futures being at risk. Ironically, one of the lead organizers of #StudentsSayNo, Natalie Moore, initially attempted to go the route of conventional political engagement, telling CBC Radio, “I emailed my MPP, and when I didn’t hear back from him, I really wanted to do something.” Young people are quickly learning that if they want to defend their education, the only power they can rely on is their own. And they are putting that lesson into practice.

In fact, the president of the Elementary Teachers’ Federation of Ontario, Sam Hammond, posted online that, “‘union bosses’ had absolutely nothing, nothing, to do with the student protest… Students across this province are doing just fine on their own!”

While it is true that students are “doing just fine on their own,” they would be doing even better if they were joined by the labour and post-secondary student movements. Their militancy is an example of exactly the kind of action that will be necessary. Come September, teachers in Ontario will be in a position to go on strike, and the Canadian Federation of Students will have voted on a strike plan for post-secondary students. There is a real opportunity for the struggles of high school students, post-secondary students, and workers to unite, shut down the education system, and bring down Ford.