Capitalism is corrupt; Projet Montreal must fight the bosses 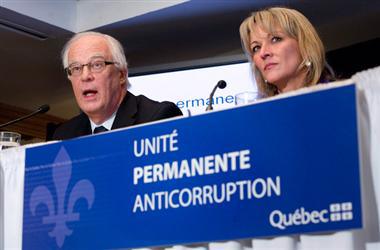 November 3, 2013 is the date set for municipal elections across Québec. The past few years have been a roller coaster ride of scandal and corruption for municipal politicians across the province. Gérald Tremblay, the mayor of Montreal since 2002, resigned on Nov. 5, 2012 as a result of allegations of corruption and Mafia ties. His successor, interim mayor Michael Applebaum, was not even able to finish the remaining term in office; in a pre-dawn raid on Jun. 17, 2013, Applebaum was arrested on 14 charges including fraud, conspiracy, breach of trust, and corruption in municipal affairs. As we have stated in previous articles, Montreal’s bourgeois parties are in crisis. This opens up large possibilities for Projet Montreal, but only if it presents a program that can break with the status quo and addresses the aspirations of workers and youth of today. While the bosses’ parties raise fees and criminalize protest in this city, they also skim billions of dollars off the top as their fee for carrying out the demands of big business. Projet Montreal cannot fight the bosses’ corruption without fighting for the interests of workers and youth.

In the last municipal elections, Projet Montreal’s campaign scored a breakthrough in Montreal’s traditional two-party system. Projet Montreal managed to secure 25% of the vote and came in third to Tremblay’s Union Montreal and Louise Harel’s Vision Montreal. The revulsion with the two main parties, both of whom were exposed to have Mafia ties during the course of the campaign, was the main reason behind Projet Montreal being catapulted from having only one seat in Montreal’s city council to having a serious shot at power. The program presented by the party, while limited, still provided for an expansion of services in working-class areas and a reduction of transit fares, which was enough to gain an echo as an alternative to the mixture of theft and fee increases the other two parties promised.

Much of the media attention around Projet Montreal this time around is focusing on the party’s financing, especially in contrast to the finances of the two main bosses’ parties. The party raises its donations from individuals in small amounts, and lists all donations over $100 on its website.  This transparency is in sharp relief to the murky “brown envelopes” received by the other parties.  Projet Montreal’s mayoral candidate, Richard Bergeron, is placing great emphasis on the fact his party is not indebted to the Mafia bosses and will lead the “fight against corruption”.

Fighting corruption is all well and good, but is this the main reason that will lead working-class people to vote for a municipal party?  Working-class people will have to be excused for having a certain degree of cynicism regarding Montreal municipal politics as they have heard all of these promises before.  We should remember that Applebaum also promised to “clean up city hall”, shortly before he himself was arrested for corruption.  Louise Harel, too, tried to take this angle until it was shown that members of her party were also guilty of taking bribes.

For Bergeron and Projet Montreal to succeed in the next election — to convince workers and young people to vote and volunteer their time for the party — means having to present a platform that captures people’s imagination and cuts through the cynicism surrounding municipal politics in Montreal.

A good start for Projet Montreal would be promising to repeal Municipal By-Law P6.  Last year, the right to protest across Quebec was suspended by the Charest Liberal government through Bill 78 (which subsequently became Law 12).  Mayor Tremblay felt it necessary to re-enforce this provincial law with a municipal by-law that had similar measures and restrictions.  Those charged under P6 face a maximum fine of $637.  Although Law 12 was subsequently revoked after the provincial election, By-Law P6 remains in force in Montreal.

The results of the crackdown on civil liberties continue to be felt: hundreds have been arrested, held for hours, fined, and then released. An example of the absurdity of this law was seen on 2nd May when a group of parents attempted to cross a street back-and-forth while respecting the traffic signal, a very mild protest asking for better security on the dangerous intersection outside of their children’s elementary school. However, they had not provided a written itinerary, and their protest was stopped by the police.

Tremblay and Applebaum have left the city with a legacy of an out-of-control police force with undemocratic powers. Projet Montreal has taken the correct line and stood against this law, working for its repeal. But this position is absent from their electoral platform announced earlier in August.

Another key plank that should be highlighted in Projet Montreal’s election platform is the call for free public transportation.  During the municipal election in 2009, in Plateau-Mont-Royal, the local campaign went further than the central campaign wished. Rumours circulated that activists had been told by the Projet Montreal head office not to bring up the demand for free public transportation, although it is in the party program. In Plateau-Mont-Royal, the campaign centred on this demand, even going so far as to distribute fliers shaped like metro passes that advertised it to every home in the borough. The result is undeniable proof that promises that have a real effect on the living conditions of workers are effective. Projet Montreal captured every single borough council seat, every single city council seat, and the borough mayoralty in the Plateau. The major part of the party’s gains in the election came precisely from Plateau-Mont-Royal and their platform of free public transportation. And, all of this has to be put into the context that prior to the election, Projet Montreal only held one seat across the island of Montreal.

This is a demand that would galvanize support across the city, but strangely enough, it too is absent from the electoral platform announced in August. This is a mistake that will dampen the party’s ability to make further gains. Instead of focusing on massive investment in public transport to expand it and make it free for all, the party wishes to focus on punishing the use of cars. A proposal to put tolls on Montreal’s bridges will further damage the party with thousands of workers who commute off the island for their jobs. PM’s platform promises to use some of the toll money to eventually expand three of the four metro lines, but the solution should not be a tax on working people. We do not need to raise tolls on working-class people to fund this program; we can find it in the pockets of the rich who have been pulling the strings at City Hall for too long! If every worker in Montreal, and the surrounding area, could get to and from work free and without hassle, there would be no need for toll bridges to discourage driving!

Corruption is ingrained in politics, and not only in municipal politics. But it does not begin with politics. The source of the disease is in the relationship between politicians and business. Corruption is a business transaction, nothing more. Politics is corrupt because business is corrupt. In the search for profit, every advantage must be pursued, and the line between Mafia practices and the practices of “respectable companies” is simple hypocrisy. SNC-Lavalin is not a Mafia business, but a multi-billion dollar company with operations across the world. Yet it has been implicated in corruption in the Montreal super hospital contract to the tune of $22-million in bribes. This is simply the cost of business.

And the politicians are simply the political delegates of that capitalist class. One cannot represent a gang of thieves without being a thief. So the question is, again, what should Projet Montreal do?

If it wishes merely to take power and “manage the city better”, it will be faced with the question, “Manage for whom?” The thieves are not just in city hall, they are in every company in Montreal, and they will come asking for an audience, for contracts, for their needs to be met. There are billions of dollars at stake. Can we honestly believe that a party can protect itself from this influence?

There is only one way to break with the corruption, and that is to put forth a socialist program, a plan to achieve an immense rise in the standards of living of Montreal’s working class. To resist the influence of the corrupt capitalist class and their crony politicians, Projet Montreal must base itself on the workers and youth that made this city vibrant with banging pots and pans last year. This creative, energetic class can provide a left party the mass support it needs, in every neighbourhood, school, and workplace.  It can take on the corrupt bosses and win. The student unions, the trade unions, and even Quebec solidaire and the NDP, should be drawn together with Projet Montreal in a united front to fight for a transformation of the city — an end to P6, free public transportation, massive expansion of social housing, and the expropriation of public property privatized through corruption.

This article was originally published in our French-language sister journal, La Riposte (Québec).