Over 100 people turned up in Toronto to celebrate the anti-imperialist victory in 2004. The evening featured musical performances and spoken word by a number of local artists, in addition to a visiting Cuban folk group. The consul-generals of Venezuela and Cuba were also in attendance to offer their greetings and gratitude. Hands Off Venezuela helped to organize the successful event, in addition to the “Venezuela We Are With You” coalition and the Bolivarian Circles “Louis Riel” and “Manuelita Sáenz”. 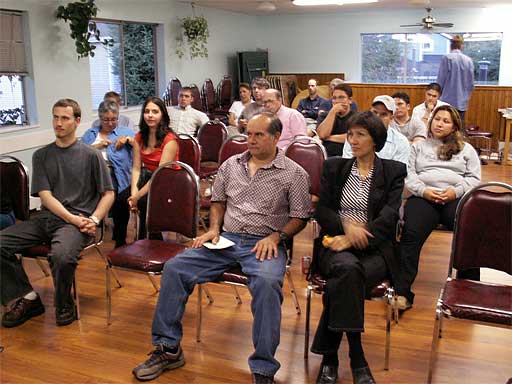 In Vancouver, over 25 people gathered in Vancouver’s Chilean Co-op to view the Canadian premiere of “The Old Man and Jesus: Prophets of Rebellion”, in celebration of the 15 August international day of solidarity with the Bolivarian Revolution. Following two Chavistas through their day-to-day lives in Caracas, the film showed the great progress of the revolutionary process unfolding in Venezuela, while also highlighting its inability to solve many of the fundamental problems of Venezuelan society, problems caused by the nature of the capitalist system.

The film was enthusiastically received by those in attendance, who were inspired to participate in a discussion after the film. The future of the Bolivarian Revolution, as well as the growing movement seeking to overturn the fraudulent election in Mexico, were also discussed as activists came up with ways to participate in those struggles from Canada.

Smaller events were also held in Calgary and Whitehorse, each attended by about 20 people. In total, the Hands Off Venezuela campaign was able to attract Venezuela solidarity activists from all corners of Canada to celebrate a key victory of the Bolivarian Revolution.

Hands Off Venezuela was also invited to participate in the annual Labour Day parade in Hamilton on 4 September. HOV held a prominent spot near the head of the parade as over 5,000 marched through the streets of downtown Hamilton. Afterwards, many trade unionists approached the HOV stall to inquire about the campaign and about events in Venezuela. Of particular interest were materials on workers’ control and the nationalization of Venezuelan factories.