The measure, implemented through Supreme Decree 28701 that clearly states that, “as a measure of national sovereignty, and following the mandate of the Bolivian people… The natural hydrocarbon resources of the country are nationalized… The State recovers absolute and total control, property and possession of these resources”. From May 1st the different oil companies that operate in the country are forced to give ownership of their whole production to the state owned company YPFB, which “in the name and in representation of the state, exercising in full its ownership of all hydrocarbons produced in the country, takes over its commercialisation, defining conditions, volumes and prices both for the internal market as well as for export and industrialisation”.

To reinforce the measure, the government ordered the army into all the oilfields and installations. Evo Morales himself, wearing a hard hat, personally supervised the operations in an oilfield operated by the Brazilian Petrobras, one of the largest multinational companies in the gas market in Bolivia. “The time has come, the awaited day, a historic day in which Bolivia retakes absolute control of its natural resources,” he said, as soldiers erected banners saying “Nationalised, property of the Bolivians”.

The move certainly took the oil companies by surprise, since they expected the Evo Morales government to renegotiate the contracts under which they are operating, but they thought he would do it through talks and negotiations, rather than by imposition. The oil companies have really no reason to complain. They have been operating in Bolivia under an extremely favourable tax and royalty regime set up under the hated government of Gomez de Lozada. Many of the contracts are actually considered to be illegal and void since they were never ratified by parliament.

The decision comes after Evo Morales’ visit to Cuba, where he signed a number of agreements with Fidel Castro and Hugo Chavez. This is clearly part of a concerted effort against the Free Trade of the Americas Agreement, proposed by Washington, which in effect would mean a free ride for US multinationals in the whole of the continent. Due to opposition by Venezuela, the FTAA, which was supposed to have been signed on January 2005, has completely failed, and the US has moved towards the signing of bilateral free trade agreements with Central American and Andean countries. This led, just over a week ago, to the withdrawal of Venezuela from the Andean Community of Nations (CAN), since it correctly argued that if Colombia and Peru, which are part of CAN, sign FTA with the US, then this amounts to back-door FTAs with the whole of the CAN nations.

The move will particularly hit Brazilian multinational Petrobras and Spanish multination Repsol, which are the main players in Bolivia’s lucrative gas business. This is however, not a full nationalisation, and therefore, less radical than the nationalisations of the mines in 1937 and 1969. The state takes over controlling stakes in all companies (51% of the shares), but does not actually fully nationalise them. The argument is that the Bolivian state does not have the necessary technology and know-how to exploit these resources. In the new contracts proposed, the Bolivian state will receive 82% of all revenue through taxes and royalties, decisively shaking the balance in favour of Bolivia. There are many legal aspects of the decree that need to be studied more in detail. But even in the worst possible scenario that at the end of the day this would only amount to a change in the contracts under which foreign multinationals operate in the country, this would still be a progressive step forward.

As we said at the time of the election victory of the MAS in December 2005, the Evo Morales government cannot serve two masters at the same time, and it is subject to enormous pressures on the one hand from the revolutionary movement of the workers and peasants (which is what finally catapulted Morales to power, though he played no decisive role in it), and from the oligarchy and the multinationals on the other. Every step he takes to shift the balance of power in favour of the workers will be seen as a provocation on the part of the oligarchy, no matter how many speeches he makes to reassure foreign investors.

This move, which shows boldness and confidence on the part of the Bolivian government, cannot be understood outside of the framework of the revolutionary wave which is sweeping across Latin America. Without the existence of the Bolivarian Revolution in Venezuela which in turn has broken the blockade on Cuba, a government like that of Evo Morales would have never dared to take measures of this kind. 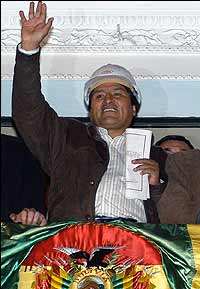 Regardless of the legal details and the scope of this semi-nationalisation, this is clearly a step forward for the movement of workers and peasants in Bolivia and throughout the continent, and has been seen as such. This is a move that will increase the confidence of the poor masses in Bolivia and will push them towards putting even more pressure on the Evo Morales government to nationalise not only gas, but also the mines, the land, the bankrupt national airline LAB, etc.

In fact, Evo Morales himself declared: “This is only the beginning. At the end of May we will nationalise other energy resources… we are starting with hydrocarbons, tomorrow we will move to mining, forestry and all of the natural resources.”

These steps are taken in the logic of developing national “Andean capitalism”, to use the turn of phrase coined by Morales’ vice president Garcia Linera. But the problem is that the main contradiction in Bolivia is precisely that there is no national capitalist class separate and independent from the landowners and the multinationals. Any attempt to create such a national capitalist development on the basis of the state will inevitably lead to a head on clash with the real capitalists, the owners of the banks, industries, mines and the land, which form an inseparable block with imperialist interests. The choice is a stark one: either socialism or imperialist domination.

Unfortunately, the leaders of the mass movement of the workers in Bolivia do not seem to have learnt any of the lessons from the election of Evo Morales. First, the leaders of the Bolivian Workers Union (COB) did not take advantage of two revolutionary opportunities, in October 2003 and in May June 2005. They even admitted themselves that if on those occasions the workers did not take power this was only because of the lack of a revolutionary leadership. Then, inevitably, the movement was derailed onto the electoral plane. Instead of putting forward workers candidates and at the same time giving critical support to Evo Morales, the leaders of the COB took the unfortunate decision of arguing for a boycott of the elections. They went as far as to say that neither Morales nor the candidate of the oligarchy would solve the problems of the workers and that therefore there was nothing to choose between them.

The masses of workers and peasants had a clearer class instinct and voted massively for Evo Morales. In the epicentre of the revolutionary uprisings, the working class city of El Alto, nearly 80% voted for Morales and the MAS. This was treated as if it were an irrelevant detail by the leaders of the COB, particularly Jaime Solares, who continued with an ultra-left line which was completely out of touch with the masses of workers and peasants. This was clearly demonstrated on April 21 when they could only gather a couple of hundred people at a demonstration they had called in La Paz as part of a so-called “general strike” against the Morales government. Instead of having a policy of organizing the workers to struggle for their demands to put pressure on the Morales government (which they consider as their own) to deliver on its promises and even go further, they pursued a policy of ultimatums which cut them off even from even most of the advanced sections.

As a result, the May Day demonstration called by the COB was noticeably smaller than the one called by the MAS where the announcement of nationalization was made. The forthcoming congress of the COB (which had to be delayed after the fracas of the April 21 “general strike”) will be the setting for a strong clash between the current leadership and the supporters of the MAS.

In revolutionary periods, mistakes in tactics and strategy can prove to be fatal. A genuine revolutionary Marxist leadership can only be built in Bolivia by understanding the real mood of the masses and their relationship with the Morales government. Marxists must maintain their own political programme and be clear on the main point: genuine sovereignty and control over the natural resources to the benefit of the majority of Bolivians can only be achieved through the nationalisation and democratic planning by the workers themselves of the basic pillars of the economy, that is, through the struggle for socialism. But before this can be realized, they need to win over to their side the majority of the workers and peasants who at the present time have put their trust in Evo Morales. This can only be done by patiently explaining and accompanying them in their struggle, by supporting every progressive step taken by the government, while at the same time pushing the movement forward.