BC Election: Kick out the corrupt Liberals! 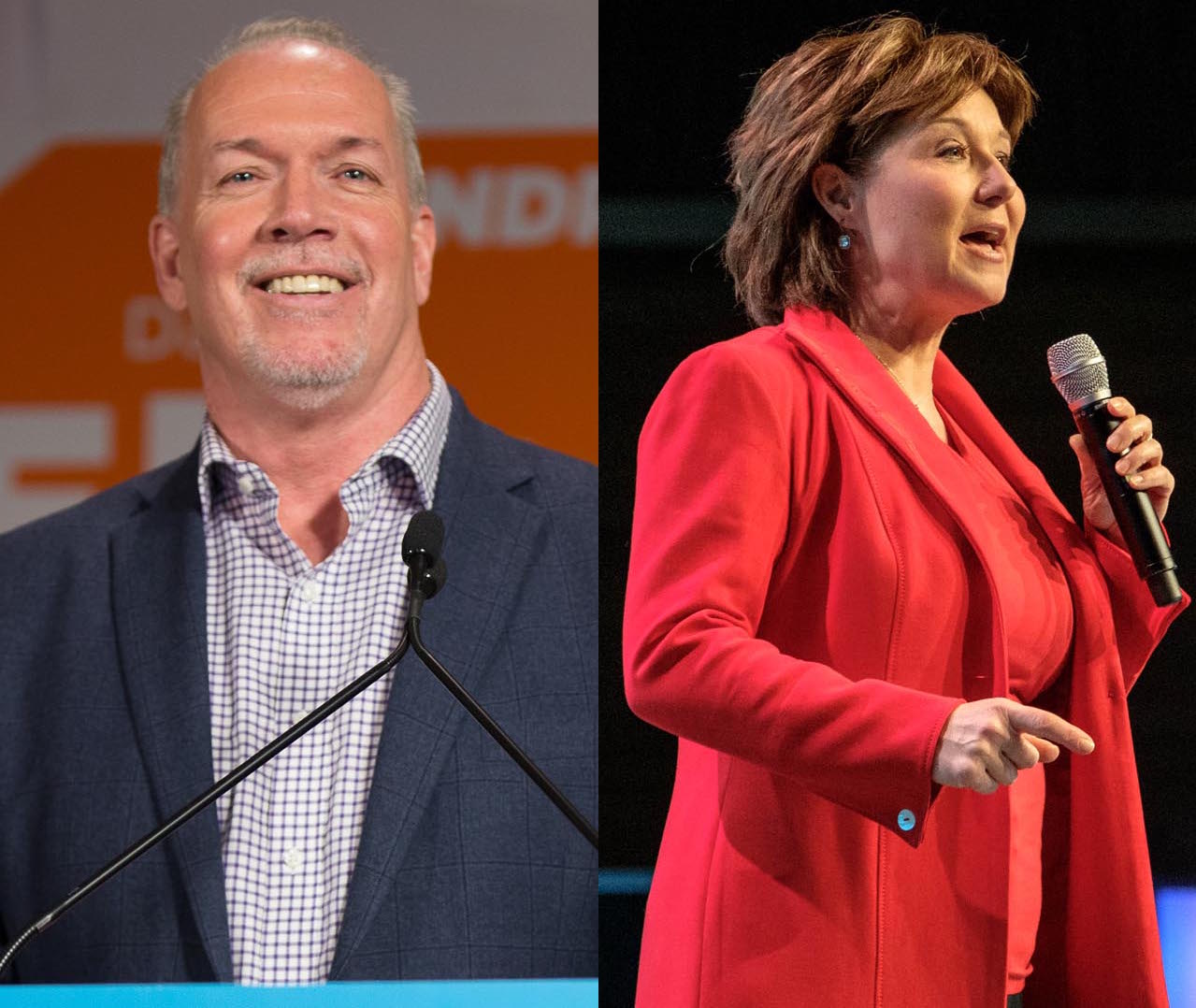 While the writ will drop on April 11, unofficially, the British Columbia provincial election has been well underway for several months now. Christy Clark seeks re-election to add four more years to 16 years of BC Liberal Party rule, while John Horgan is attempting to prove that he and the BCNDP are capable of governing the province for the first time since the 1990s. The 2017 provincial election is shaping up to most likely be a repeat of the 2013 election and 2005 before it; the Liberals are, as usual, mired in another scandal and the BCNDP is, once again, seemingly incapable of either making hay out of this or clearly outlining a platform for the workers of BC.

Similar to 2013, the BCNDP is maintaining a consistent, if slight, lead province wide in the polls. However, given the abrupt upset of 2013 this hardly provides any comfort as at that time the polls were even more clearly in favour of the BCNDP (sometimes even 20 points ahead) and they still lost.

Conventional campaign machine wisdom would tell us that with Christy Clark being the most disliked leader in the race, it should be a cake-walk for the BCNDP and yet no clear momentum can be found. Instead, voters have turned towards third parties, something that historically would’ve been unheard of in BC politics. However, even there, the relatively high support for the Green Party and the BC Conservative Party is little more than an expression of disgust with the two main parties. Ironically, for the two smaller parties it’s their anti-establishment rhetoric that gains them a foothold and without the general malaise in BC politics they would both sink back into total irrelevance again.

Since the surprise win in Alberta in 2015, the NDP has suffered defeat in every election, both at the provincial and federal level. Whether in government or not the party has been in a general retreat everywhere. As well, after the equally surprising ousting of federal NDP Leader Tom Mulcair, the BC provincial leadership of the party has found itself desperate enough to adopt some progressive policies. Compared to the platform of 2013, when the party was proposing privatizations that even the BC Liberals weren’t considering, the current platform is downright left-wing. Now, at least, we have some, albeit thin, meat to this campaign. 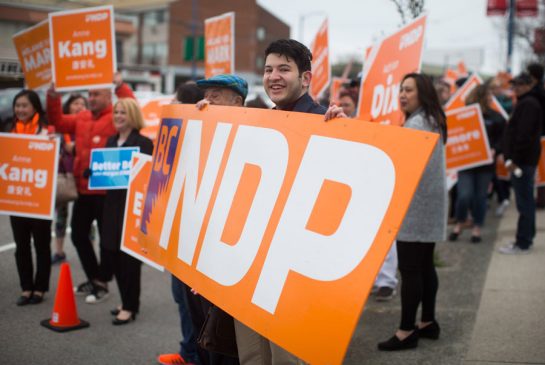 The BCNDP promises campaign finance reform, $10 a day childcare, a fight against any new pipelines, support for the Fight For $15 campaign, and to somehow stop further speculation in the housing market. While all of these are good starts, they’re a hodgepodge of wedge issues and band-aids compared to the real crisis facing BC workers.

While a $15 minimum wage is a clear improvement, on its own it only barely lifts full-time minimum wage workers above the poverty line. With inflation still outstripping pay increases, this positive reform loses its significance with every passing day. It also does nothing to address the much greater problem of the increasing number of workers earning minimum wage or the increasing casualization of work in a province where only 24 hours notice is needed for what may only be a meager two hour shift. Without some kind of sweeping reform of labour laws these and similar half measure proposals will only gain a passive approval of workers and will not inspire the sort of confidence in left wing politics that’s so desperately needed.

Similarly the BCNDP’s opposition to the Kinder Morgan pipeline, while putting them into conflict with their Albertan counterparts, is a good start. Still, the broader question of jobs is left unresolved. Appeals are made to the fact that it’s not a binary choice between jobs or the environment and that’s true enough. We’ve seen how easy it is in this province to end up with neither. Without some kind of serious jobs plan the Liberals will continue to score cheap points against both the BCNDP and the notion that we can have both jobs and a healthy environment.

In a province where spending two thirds of your paycheck or more simply on rent is less and less the exception but instead the rule, a total freeze on housing speculation would merely leave Vancouver and Greater Victoria as only nearly unaffordable. In addition, so long as the province relies on the private sector for housing, any new laws against speculators would only have the effect of driving down construction of new homes, thus further exacerbating the historically low 0.6 per cent vacancy rates. Capitalism has completely warped the housing market in BC where simultaneously there are skyrocketing rents and yet almost all new development is going to condos and townhouses. If the BCNDP were to instead approach housing as a fundamental right and adopt a robust program of social housing to meet the needs of British Columbia, it would not only put an end to this crisis, but would more than any other issue be able to win the election single handedly.

It is not a lack of clarity that’s failing to connect with workers, but a lack of content.

The BC Liberal Party has been dogged by scandal and rumours of corruption emerged from the early Gordon Campbell days, with the sale of BC Rail which culminated in RCMP raids on the legislature in 2003. When The New York Times exposed the BC Liberal Party’s personal enrichment from wealthy donors it was more of an embarrassment for the BC Liberals and Christy Clark than anything close to a shocker for the rest of us. For those in this “Wild West”, at least, it’s been common knowledge for some time. The only dispute in the media was whether this was a fundamental corruption of the legislature or just the British Columbian (i.e. Liberal) way of doing business.

The answer to that question, in classic BC fashion, depends on which party one supports. It should come as no surprise then that even with these and several other ongoing scandals, other than charges against minor staffers or non-apologies in the legislature, nothing of political substance has resulted from this. The apolitical appeals against “corruption” and “broken promises” by the BCNDP have continuously failed to gain traction because they fail to address capitalist class character of the provincial Liberal government. The BC Liberals are openly serving the interests of capital and unless that is itself criticized, all talk of “hypocrisy” by the NDP will remain anemic.

The vital questions of employment, living standards and protecting public services are almost left as an afterthought. The BCNDP act as if British Columbians should be proud just voting for the less worse option, yet in all this time the BCNDP has failed to convince people of even that modest proposal. It’s done no good piling on criticisms while offering no superior alternatives. We already know the Liberals are terrible, so why is it that the BCNDP is not trusted to govern?

When pressed, the leadership of the BCNDP appeal again to the Liberals’ corruption, only this time as a negative for their chances. The BC Liberals use public funds for partisan ads, they rely on secret donations from 150 or so major donors, have intimate ties to the media and disingenuously promise anything to stay in power. But again, none of this is new. To defeat the Liberals requires more than a charming smile and an appeal to honesty. It requires exactly the sort of bold politics the party leadership has been unwilling to take up for decades.

On May 9th the BCNDP may still win this provincial election, but it will be in spite of not because of any policy or campaign strategy yet undertaken. Time and again we’ve seen the NDP defeated and when (or if) the leadership gets around to doling out blame, it lands on anything other than politics: anti-NDP attack ads, opponents having more money to spend, an inability to “connect” with voters or explain a presumably complex platform, or even blaming hubris! As if the belief the NDP could win is somehow supposed to be held against the very people who most support the party.

Instead, what’s needed now, both to win in BC and across the country, are bold socialist policies that hit at the very root of capitalism. While the NDP has suffered nothing but defeats in recent years, those who have come out clearly in favour of socialism, such as Jeremy Corbyn and Bernie Sanders, have shocked the pundits and defied the polls. Jean-Luc Mélenchon appears to be making a similar breakthrough in France’s presidential election. While these figures all have their limitations the point is clear: people are willing to fight for socialism. When a clear socialist platform is presented it has an electric impact out of all expectations. Only a genuinely left-wing argument is capable of enthusing and mobilizing workers both to vote and fight for their interests. Moderation has led to defeat after defeat. The BCNDP’s current platform is a nudge in the right (left) direction, but British Columbians are looking for a genuine alternative. The BCNDP needs to provide it! Otherwise, it risks what very few British Columbians want: another four years of corrupt Liberal rule.