With the BC election campaign kicking into high gear, the NDP again finds itself behind in the polls.  The numbers show the NDP is anywhere between six and twelve points back, depending on which poll you believe.  But, in a first-past-the-post-system, even six points is a lot.  A more recent poll by Ipsos Reid says that 44% believe Liberal leader Gordon Campbell would make the best premier, while only 30% said that BC NDP leader Carole James would be best to fill the job.  BC is being hit hard by the economic crisis with over 22,000 jobs lost in the last month alone.  Gordon Campbell is one of the most hated leaders in BC history and his approval rating sits at just 34%; but amazingly, NDP leader Carole James’ rating is even lower at 29%. Something is clearly wrong here.

Campaign in Trouble
The party has unveiled its worst platform in history.  There is not a single substantial reform anywhere in it.  Policies passed by party conventions have been replaced by watered-down promises.  Instead of banning raw log exports, the platform calls for restricting them.  Instead of a $5/day daycare, James promises to create a plan for a daycare program – without any details of what that plan might look like.  Instead of scrapping the scandal-ridden BC Rail deal, they plan to investigate it.  Instead of re-nationalizing BC Ferries, they plan to re-establish accountability.  The list goes on and on. 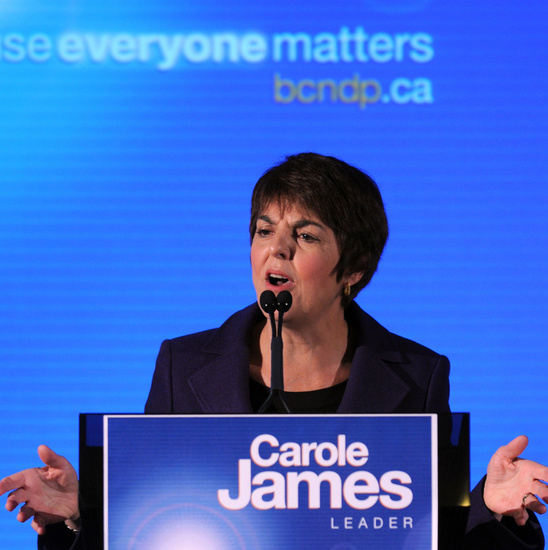 Columnist Alex G. Tsakumis recently published an article titled “Carole, time to pick it up!” in 24 Hours newspaper.  The article pointed out what everyone on the left already knew, “…unless Carole James makes some dramatic improvements, she will go down in the history of this province as being the gal who ran against the most despised premier since Bill VanderZalm, and lost.”  The NDP has promised very little, and certainly nothing that would make a substantial difference to the lives of working class people in British Columbia.  This is the ultimate reason behind their poor numbers.

Their lacklustre platform is not the only problem facing the NDP.  Many party activists have complained that this campaign is being waged under the strict central control of the party’s provincial office.  That may sound like nothing new to the average NDPer, but this campaign is different.  Everything from the printing of election materials, to statements to media, to campaign strategy is being tightly controlled by long-time NDP strategist Gerry Scott.  This has left many activists frustrated.  With a weak platform and provincial office stifling the grass-roots, the NDP is in serious danger of alienating their rank and file activists and being left to fight an election without any real forces on the ground.  In the past, the NDP’s strength has been its organization of rank and file activists that bring the vote out on election day.  The NDP is always out-spent by the right-wing and this election will be no different with the Liberals raising over three times what the NDP took in. But, this is the first time in history that the NDP faces the serious prospect of being out-organized by the BC Liberal Party.

BC is being hit hard by the global recession.  Tens of thousands of people are being laid off.  Rural BC is simply being decimated.  The lumber industry completely collapsed as the real estate market crashed and demand for lumber disappeared.  Every single mill in the town of McKenzie has closed; this lumber town is becoming a ghost town.  Filmmaker Andrew McIntosh puts the unemployment rate there at a staggering 90%.  We have witnessed the collapse of the construction industry and mass layoffs of construction workers.  In the last three months alone, 80,000 workers in this province have lost their job.

Amidst this crisis, Gordon Campbell’s election slogan is “Keep BC Strong”.  He takes credit for the economic boom over the last several years (without even acknowledging that this was a global phenomenon), but refuses to accept any of the blame for the slump we’re heading into.  He has allowed lumber companies to shut down mills and send raw logs to China where they are milled in sweatshops, while thousands of workers are laid off here.  His government let minimum wage workers go eight long years without a raise, while BC’s child poverty rate climbed to 20.9%, the worst in the country.  Campbell dropped the minimum age for employment to 12, making British Columbia the most child-labour friendly jurisdiction in North America.  This is Gordon Campbell’s idea of a strong British Columbia.  And why not?  This is what capitalism has to offer.  These are sound market principals – remove regulations and let the free market sort out the rest.  This is it.  This is capitalism.

A Real Platform for the NDP
If the NDP were to come out with a strong socialist program, they would be able to harness all of the frustration building up inside the working class and sail to victory.  Party strategists fear turning off “middle of the road” voters  but as Trotsky pointed out, if you stand in the middle of the road you will be hit by traffic from both directions.  Rather than winning liberal votes, the NDP leadership is turning off their own supporters.  They have also proven themselves completely incapable of inspiring the mass of the working class that normally doesn’t bother voting.

There are two things that this latest economic crisis has proven.  First, capitalism doesn’t really work.  Anyone that tries to defend an economic system that periodically, and without explanation, ceases to function needs to give their head a shake! Second, the bosses and their governments around the world have much more money than they are letting on.  For years, when workers ask for a raise, or for new social programs, or for better schools or hospitals or transit, they have been told there is no money.  But now, when the big banks and corporations get into a bit of trouble, they are able to suddenly conjure up trillions of dollars to hand over to their already rich friends.  The capitalist have utterly destroyed our economy.  They have lost whatever right they had to manage it.

By breaking with the capitalist system, this province could turn around what is bound to be the worst recession in generations.  By nationalizing some of the key industries, we could pay for free universal public transit, education, and healthcare.  A socialist plan for the economy would put construction and lumber workers back to work by implementing a massive public works project to build schools, hospitals, and social housing.  Real treatment and housing could be made available to the growing population of addicts in Vancouver’s downtown eastside.  Taking the big industries out of the hands of the profiteers and putting them into the hands of the public would give us the tools to solve our environmental problems.  Carbon emissions could be reduced with real economic planning, instead of slapping another tax on an already stretched working class.

An NDP armed with a socialist platform would be able to inspire the down trodden masses and mobilize them to transform our society.  Faced with the prospect of real change and improvements in living standards, a groundswell of working class support would sweep the NDP to power. Gordon Campbell and his Liberals would be thrown out of office so fast they wouldn’t be able to say “exploitation, deregulation, and privatization”.