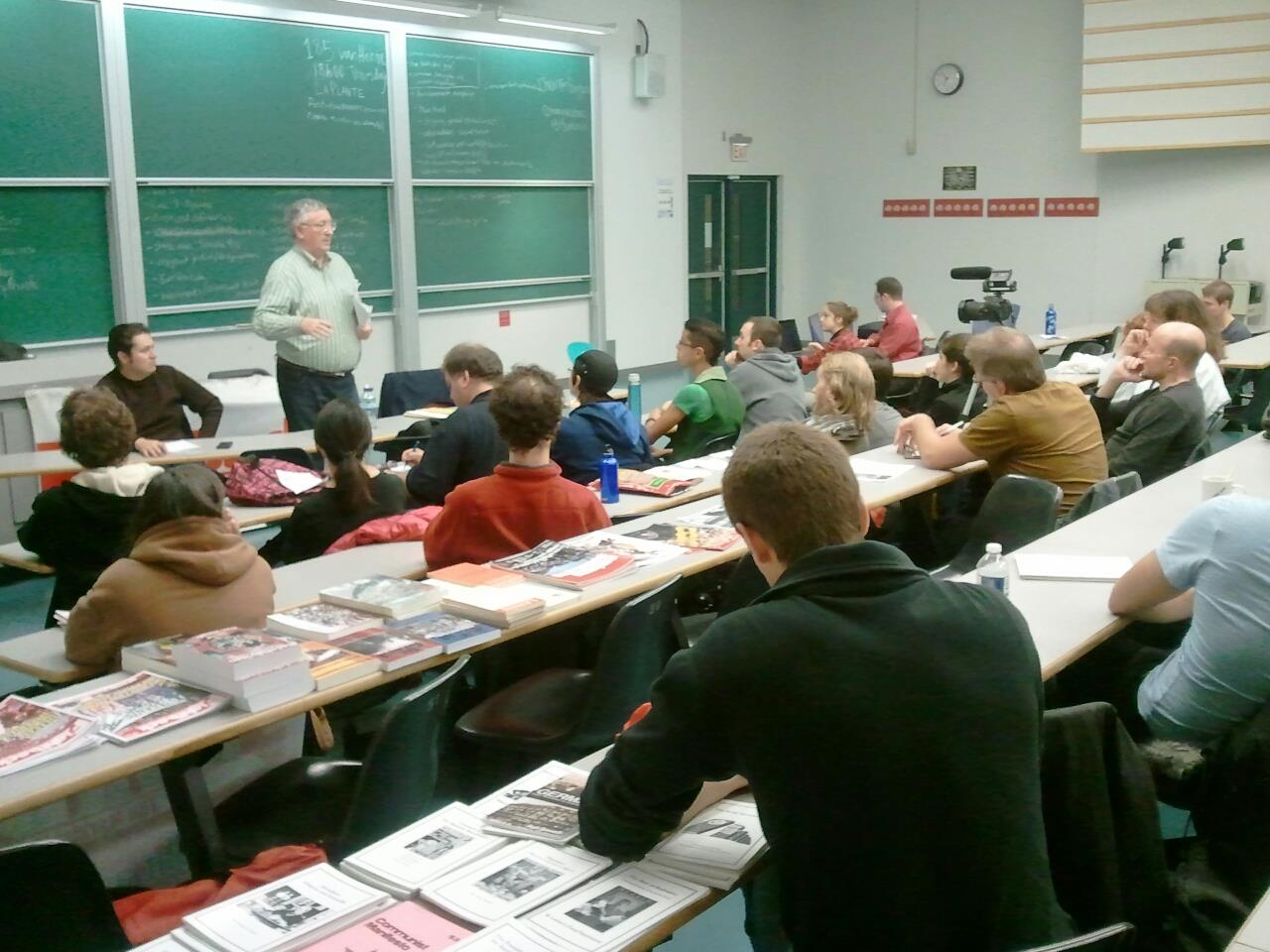 The latest stop in the Canadian leg of the Alan Woods North American speaking tour took place in Ottawa Sunday night, in which a lively and productive discussion was had amongst the 30 students, workers, and trade unionists attending.

Alan started by emphasizing that the present crisis of capitalism is not a normal cyclical crisis, but a crisis of the system and of the regime. Increasingly emerging out from under this decaying husk of a social order are ever more frequent episodes of class struggle, epitomized most clearly by the hundreds of thousands of workers and students on the streets of countries like Greece, Portugal, Italy, and Spain, protesting the ferocious austerity being levelled upon them.

While the crisis in North America, at present, is not as severe as in Europe, Alan reminded us that things can change very rapidly. Moreover, we have already witnessed significant episodes of class struggle in the US and Canada, particularly in Madison, Wisconsin where a magnificent protest movement of the public sector unions there showed that workers are prepared to fight vigorously against austerity and to defend previously won democratic rights, such as the ability to collectively bargain. More recently in Quebec, we witnessed a historic student strike, which has emerged victorious for the time being largely because of the militant tactics and no compromise attitude employed by its leaders and participants.

The discussion covered a wide range of topics, but in the end two broad themes predominated: the question of whether capitalism can be reformed and regulated, and the experiences of the former “Communist” regimes such as in the ex-Soviet Union. As for the former, Alan’s answer was a clear “no”. While capitalism in general cannot be regulated, this is especially the case in the present climate where globalized markets demand the maximum freedom of movement for capital. To illustrate this point, Alan brought up the tax changes proposed by the “socialist” president of France, François Hollande, who wishes to implement a 75% tax on the rich. This will inevitably create a flight of capital if, and when, it is implemented, at which point Hollande will be forced to retreat. Alan then went on to explain the difference between reforms under capitalism and the ideology of reformism. As Marxists, we proudly and consistently fight hand-in-hand along with the workers for every reform that can be squeezed from the capitalists; however, we do it on such a basis as to also explain to the workers that these reforms are ultimately unsustainable unless we also fight for a wider socialist alternative to the capitalist mode of production. The reformists, on the other hand, do precisely the opposite. Because they accept the logic of the capitalist order, they tend to listen to the bosses’ claims that reforms are not possible in the present climate more intently than they are willing to listen to the pleas of the workers they are supposed to represent! The result is that the reformists are often the very ones implementing the counter-reforms and the rollbacks that the bosses are demanding.

Alan argued that the October Revolution in Russia proved that it is possible to go beyond capitalism, abolish private property, and implement democratic workers’ control of the economy. This is in spite of the fact that Russia at the time was an extremely underdeveloped country — in a population of 150-million, only 3.5-million were industrial workers. The massive potential of the nationalized planned economy was to be proven in the coming decades, with the country’s rapid development and, particularly, with the eventual smashing of Hitler’s forces by the Red Army during World War II.  While the achievement of the October Revolution was a bloodless affair in itself, it was the counter-revolutionary invasion by 21 foreign armies and the isolation of the Russian Revolution internationally which created the conditions for the rise of the reactionary Stalinist regime years later. Alan pointed out that this process is explained in greater detail by Leon Trotsky in his seminal work The Revolution Betrayed. Regardless of this fact, for the first few years there were wonderful experiences of workers’ control in the factories, and it is for this which we stand for.

Alan closed by asserting that Marxism is not dogma. Alan stated that he is completely open to being convinced otherwise if somebody could formulate a body of ideas superior to those of Marxism.  However, this has yet to occur, a century-and-a-half after Marx and Engels wrote the Communist Manifesto. The bulk of the “new” ideas being generated among the Left today are in fact no more than the rehashed, failed theories of yesteryear.

The mood was one of intense interest and enthusiasm for the ideas of Marxism. Fightback is only just beginning to get organized in the Ottawa region and this event marks an excellent springboard for the spreading of Marxism in the Capital region. The tour now moves on to Montreal for three days of events to round out the Canadian leg of the tour.