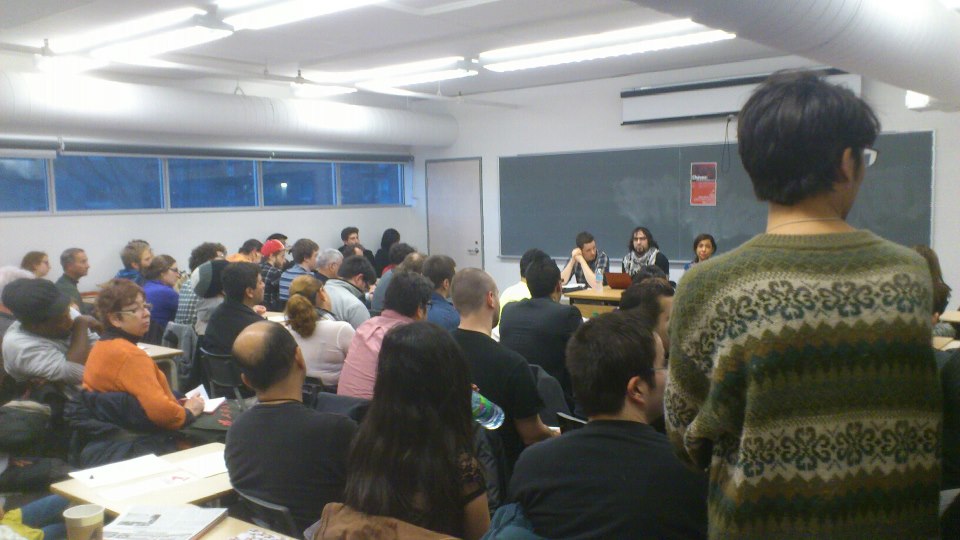 On Wednesday April 3rd, over 80 people crammed into a classroom at the Université du Québec à Montréal (UQAM) to hear about the revolutionary legacy of Hugo Chávez and the prospects for the revolution moving forward. The outpouring of grief from millions — not just from Venezuelans but from workers all over the world — has demonstrated what Chávez and his ideas meant to the oppressed sectors around the planet.

The 30-40 person capacity room quickly filled up and by the time the event started at around 7:15pm, there were close to 80 people squished into the room, with more arriving in the hallway. The event was chaired by UQAM student Nichola Gendreau Richer who welcomed everyone to the event, which was organized by the Étudiant-e-s socialistes of UQAM, in collaboration with the Société bolivarienne du Québec/Hands off Venezuela, the Venezuelan Embassy in Canada and the International Marxist Tendency.

The first speaker was the Chargée d’affaires of the Venezuelan Embassy in Canada, Ana Carolina Rodriguez de Febres-Cordero. Ana spoke about the life of Hugo Chávez, the gains of the revolution, the attempted US-sponsored coup d’état in 2002, and role of Chávez as a great mobilizer of the people who time and time again came out onto the streets to defend their president and the revolution. The crowd listened intently to Ana who spoke in Spanish with French translation.

The second and final speaker was Fehr Marouf, a long-time organizer with Société bolivarienne du Québec/Hands off Venezuela and the IMT. Fehr spoke about the inspiration that the revolution has given, not just to Latin Americans, but to poor students and workers all over the world. He highlighted the treachery of the oligarchs in Venezuela who have repeatedly shown that they will not tolerate any reform which benefits the Venezuelan masses. He explained that in order to protect the gains of the revolution, it is necessary to complete the revolutionary process — which means expropriating these escualidos who constantly use their power in the economy to sabotage and undermine the revolution. He also mentioned that like the vision of Simón Bolívar, it is also necessary to spread this revolution all over Latin America and the entire world, to wipe this exploitative system from the face of the planet and build a new society.