100,000 workers in the streets of Montreal: A glimpse of what is to come 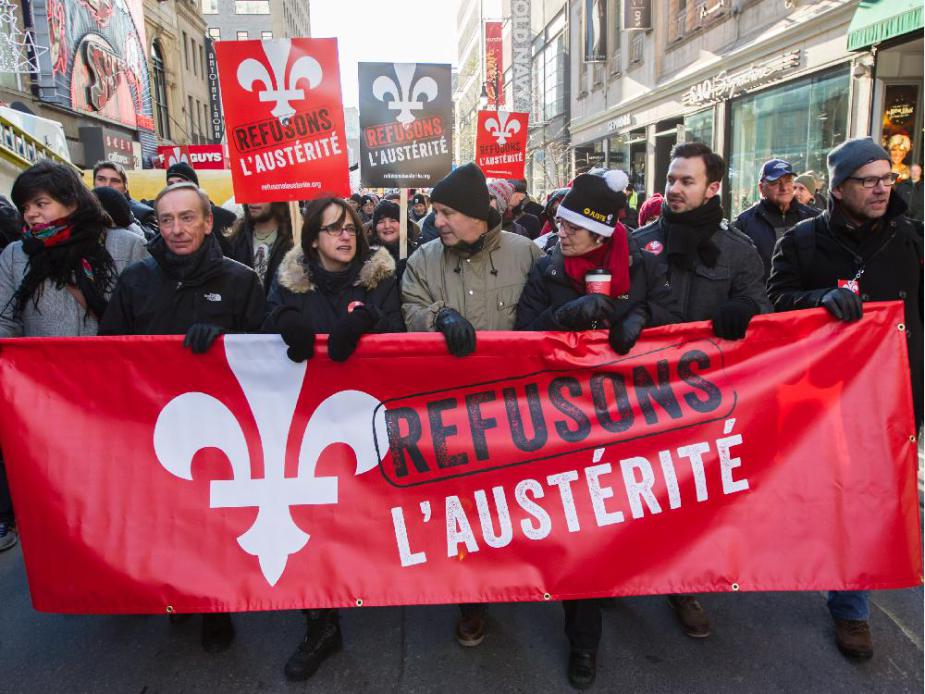 With each passing day, the stage is being set for a big showdown between workers and Quebec’s Liberal government. Since the government announced that they would attack municipal workers’ pensions (which effectively means a wage cut), tens of thousands of workers have been taking to the streets, participating in various actions and mobilizations across Quebec. The attack on pensions is also just a part of a much wider austerity package which is targeting childcare services, health care, and a myriad of other social services, all of which are part of the general social wage in Quebec won by the labour movement over decades of struggle.

In the last quarter of this year, we have seen three major demonstrations with an increasing number of participants. On 20th September, there were more than 50,000 workers marching through Montreal. On 31st October, another 50,000 workers and students marched against austerity; this was combined with a one-day student strike of over 82,000 students. And most recently, on 29th November, more than 100,000 workers in Montreal, as well as another 25,000 in Quebec City, took to the streets in protest.

Behind these impressive numbers is an increasingly militant mood that one cannot fail to feel in these demonstrations. In fact, a glimpse of this mood amongst workers could already be seen as early as June, when the Liberal government first announced its attacks. Immediately following the announcement of Bill 3, which cuts municipal workers’ pensions, hundreds of municipal workers participated in a spontaneous action, lighting a bonfire in front of Montreal’s City Hall. This was followed by a more significant demonstrations where hundreds of firefighters stormed City Hall, chasing the mayor from room to room, ripping up their collective agreement, and scattering debris all over the room. This particular action truly shook the ruling class politicians who could not even count on the police to “keep the order”.

The demonstration on Nov. 29 was by far the largest since the 2012 Maple Spring, with more than 100,000 workers gathered at Dorchester Square in Montreal. The workers crowded and snaked along Rene Lévesque Boulevard and St. Catherine Street, finally arriving at Place des Festivals. The procession was so long that the head of the march reached Place des Festivals before its end had left the starting point! Such was the sea of people that overwhelmed downtown Montreal; it was truly a sight. The mood was festive, loud, and colourful. But beneath the joyful blowing of plastic horns and banging of drums was a seething anger. One cannot miss the determined faces of the workers, ready to bring the fight to Quebec premier Philippe Couillard. Phillipe Dugas who was in the demonstration with his 18-month-old daughter in a stroller, said defiantly, “This is her first lesson in civil disobedience. I’m marching to protect our safety net in Quebec and to show solidarity against cuts in health care and daycare and education and pensions.”

Union leaders have promised that there will be an escalation of action if the government does not back down. Events have been unfolding at an ever more hurried pace over the past few months and has shown that the rank-and-file workers are ready to fight the brutal austerity that is being forced down their throats. Again and again, they have answered the calls from their unions, from big demonstrations like the ones mentioned above, to local strikes and disturbances that have flared up across Quebec.

A few days before the 100,000-strong demonstration in Montreal, blue collar municipal workers across Quebec staged a one-day strike across the province on Nov. 26. This one-day-strike was called “Le Grand Dérangement”, or “The Great Disturbance”, with the participation of 5,300 municipal workers in 18 cities, including nearly 2,000 in Montreal. Apart from this strike action, dozens of demonstrators blocked the entrance to the Port of Montreal with two small school buses, preventing trucks from entering. The workers also blocked the entrances to Montreal’s City Hall and the city`s finance building. “We are going to start a new kind of battle,” said Quebec union spokesperson Marc Ranger, “At this point we want to show we are angry and we won’t let this bill pass easily.”

Meanwhile, on 1st December, 13,600 family daycare workers across the province went on a one-day strike. Negotiations between the workers and the government have been in gridlock for more than a year, and this strike is the fourth one-day strike since July. On the table are questions of unpaid work hours and wages. Daycare workers are paid for just 35 hours per week when in reality they have to put in closer to 50 hours of work each week. They are also demanding a pay increase — from $12 per hour to $15 — in line with what other daycare workers in the province earn. However, these demands clash with government’s intention to slash their budget. The following day, the province’s 9,500 white collar workers staged a one-day strike to protest against the pension cuts.

The government has tried their best to ignore these workers’ demonstrations as they are set to implement the biggest austerity package in recent memory. “The law [Bill 3] will be adopted next week,” said Municipal Affairs minister Pierre Moreau on 26th November. When asked about the increasing opposition to their austerity program, Mr. Couillard’s austerity point man, Treasury Board president Martin Coiteux, responded arrogantly, “Mobilization is a state of life here in Quebec whenever we’re making important changes, so this is really nothing new. I don’t think we’re in any particular situation of excessive stress over what is going on.”

There is a grain of truth in Coiteux’s assertion that this time around it will take more than just regular mass demonstrations to stop the government. Big rallies and local actions are instrumental in preparing the workers for bigger, and more decisive, action down the road. Just like muscles that have atrophied, the labour movement needs to re-learn its strength and traditions after a long period of inactivity. But these actions must lead to something bigger and more concrete. Escalated actions, demonstrations, and small strikes need to build towards a one-day general strike of all workers in Quebec. This will act as a major show of force for the movement, and more importantly, give the working class a true sense of its own power. It is this that will put Coiteux in a “situation of excessive stress.”

In the end, there is no long-lasting solution for the workers within the edifice of capitalism, let alone one that is crumbling. The series of attacks that the Liberal government are setting in motion is not a matter of choice or ideology as many would have us believe. Austerity is an economic necessity of the crisis of capitalism. Any government, even a government filled with a majority of workers’ representatives, will be subject to this economic necessity as long as it operates under capitalism.

The workers, through militant action, may be able to beat back the cuts, but at most they will only manage to maintain the status quo. Let’s not forget that for the majority of workers, the status quo is already a painful existence. Furthermore, the logic of capitalism will push the government to keep attacking this fragile status quo, much less a return to the so-called “good old days” of the postwar period. At the demonstration on 29th November, Daniel Boyer, the president of the Fédération des travailleurs et travailleuses du Québec (FTQ), said, “We’ve given ourselves a social-democratic, progressive society with social programs that are the envy of Canadians and North Americans. We think we should preserve those programs.” We agree with M. Boyer, but these programs can no longer be guaranteed under a capitalist system in crisis. Today’s capitalism can no longer afford the welfare state, with its costly social programs and benefits to the working class. The only way to permanently ensure the programs and services won by workers in the past, and to fight for new victories of the future, is to fight for socialism.

To genuinely fight the cuts, we need to wage a resolute fight against the capitalist system. This truth has to be made clear to every worker and youth. To do otherwise is to lead the workers down a blind alley. When capitalism cannot even offer the maintenance of the status quo anymore, what future can we speak of under this system? A better future for the workers can only be realized under socialism. A better future for the workers and youth can only be guaranteed when the economy is taken out the hands of the bosses, and planned democratically for human need instead of corporate profit. A determined struggle against the austerity requires such an outlook if it is to succeed. It requires a socialist banner that rallies the workers, the students, the youth, and the poor around it and unites them in a workers’ party that can wage a struggle for power.