Police repression returns to the streets of Montreal 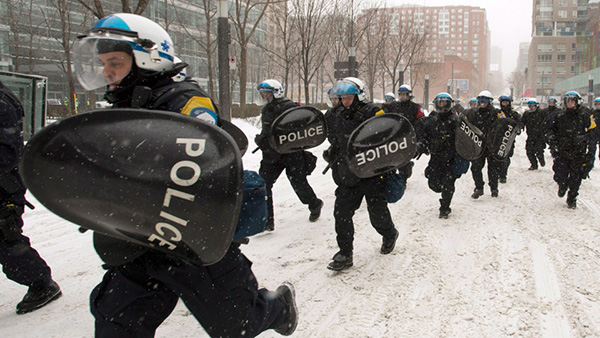 In the past couple of weeks, hundreds of innocent people have been rounded up by the Montreal police, despite the fact that these individuals committed no crimes. It is very clear that this is only the latest attempt by the state to frighten ordinary workers and youth from demonstrating opposition to the ruling class’ agenda. But, in doing so, they are playing a very dangerous game and risk destroying the veil that is bourgeois democracy.

Almost 300 people were rounded up on Mar. 15 during the annual anti-police brutality protest in Montreal, which saw less than 400 people in attendance. Before the protest even began, the Montreal police (SPVM) had already surrounded the gathered protestors and placed them under arrest. This was not an isolated incident; since then, the same drama has been replayed at two night protests organized by the student movement. In every case, before the demonstration is even allowed to begin, the police have surrounded protestors, kettled them, and arrested them. At the night demo on Mar. 22, several journalists were even ensnared and arrested by the SPVM.

The rationale being given for the arrests is that these protests are in violation of Montreal Bylaw P-6, a law, which like the infamous Bill 78, prohibits masks and forces protest organizers to ask for permission from the police to demonstrate. Both laws were put into place at the height of last year’s student movement, in an effort to use state repression to frighten people from joining the protests. Unlike Bill 78, which was repealed by the PQ government under massive public pressure, P-6 is still on the books.

In every single case, demonstrators are arrested, held for several hours in vans and buses, and then thrown out with a ticket of up to $637. No other charges can be laid, because the only crime that has been committed is the expression of one’s democratic rights. But, for the bourgeois, the hope is that this sort of intimidation is enough to keep students, youth, and workers off of the streets.

It is clear that the Quebec ruling class is very scared of another mass movement, (like last year’s student movement) erupting and throwing their entire agenda out of the window. And they will use force, or the threat of force, to prevent it from crystallizing. But, this is a very risky ploy that they are using; if they push too far, it could actually enflame the situation. Even more dangerous for the bourgeois is that their use of state repression could smash any sort of illusions in bourgeois democracy and the rights that we are supposed to enjoy. This could lead any sort of movement to much more radical demands and conclusions. In large part, it was the implementation of Bill 78 by the Liberal government that pushed the Quebec student strike to a new plane and brought whole new layers of Quebec society into the protest movement last year. What had been a strike over tuition increases became emblematic of the crisis of the entire system and the bosses’ regime of austerity.

It is not a coincidence that the police are being used in this way, at this time. The election of the Parti Québécois government did not resolve the deep malaise within Quebec society which is affecting every corner of life in the province. The February education summit did not finish off the student movement, as the PQ hoped; the province continues to be rocked by the seemingly unending accusations of corruption at all levels of government; and even the police have come under attack by the austerity agenda. In February, we witnessed the first small cracks in the police emerging when several hundred SPVM officers took to the streets — not to wildly swing their batons but to protest their deteriorating working conditions. At the top layers of the state, the City of Montreal and the SPVM have been feuding as the municipal government is locked in contract negotiations with the Montreal police and looking to drastically cut costs.

Although it would be wrong to overstate these first splits in the state, it is indicative of the depth of the crisis in Quebec society. Just like the Liberals before them, the present PQ government is stuck between a rock and a hard place. They are feeling the pressure from the bosses to restore the financial equilibrium of the province and to impose austerity; but, they are also feeling the pressure from the rest of society that is fed up with the constant cuts and attacks on their living conditions.

The ominous drum of the police banging their batons against their shields are now a familiar sound to everyone in Quebec, as if to match the often-heard class war drums sounded by the Quebec workers and students as they fight against austerity measures and general attacks on their living conditions. As Trotsky said, “The sharpening of the proletariat’s struggle means the sharpening of the methods of counterattack on the part of capital.” As the bourgeois are left with less room to manoeuvre, we can expect the repressive force of the state to be used more frequently.

The age of austerity has begun to move the masses of workers and youth. In response to the increasingly radical masses, the ruling class is beginning to take off their democratic façade and to mobilize their apparatus of violence against the working class and youth. It is no longer the case where the police only met out punishment against the most marginalized sectors of society and a handful of radical activists. Increasingly, working people from all walks of life, throughout the year, will feel the repressive might of the state. But, the bourgeois will put themselves into danger as all of these elements will sharpen the education of the masses to the true nature of the bourgeois state.