An appeal to all readers and supporters of Fightback

After many hesitations and delays, not least because of the brutal assassination of Benazir Bhutto and hundreds of her supporters, the Pakistani parliamentary elections are scheduled to go ahead on 18 February. These elections are different to any other ever held in Pakistan. We have received an appeal by three candidates who are sponsored by the Pakistan Trade Union Defence Campaign and are standing on a clear socialist program.

They are standing in three of the most diverse areas of Pakistan – from the proletarian heartland of Karachi to the tribal areas of Waziristan – but their struggle for a vote against both Islamic fundamentalists and the stooges of imperialism has a widespread appeal. 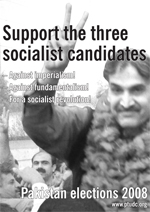 This makes the election significant for workers, peasants and everybody in the whole world who is against poverty and oppression. Manzoor Ahmed, Ali Wazir, and Riaz Lund stand for a socialist federation of the South Asian subcontinent and world revolution. If the elections are not rigged, these candidates will win. Poor people throughout Pakistan are enthusiastically raising funds for their campaigns. But they are facing some of the richest people in Pakistan. They need our help.

What can you do? We need to raise awareness about their campaign internationally, so please distribute this appeal and the accompanying pamphlet as widely as possible. Organise meetings and explain the situation in Pakistan and the programme these three candidates are standing for. Raise the issue in your trade union or left wing political party. Prepare for protest actions in case of electoral fraud against them.

Make a donation towards their campaign

By credit or debit card
Donations by credit and debit card can be made courtesy of Wellred Books.

Our website has been following closely the events in Pakistan. Read the most recent analysis and news here: