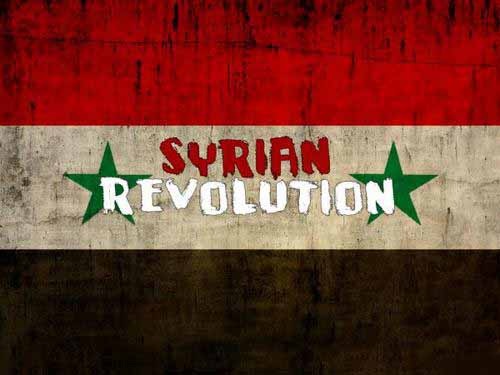 The Syrian revolution has entered a higher stage in the last few weeks. The number and size of demonstrations have reach record numbers, towns are falling under the control of the defected soldiers- including areas surrounding the capital Damascus, and embryonic forms of popular power are appearing on the stage in the form of popular councils.

After dying down for a period, the demonstrations in Syria have come back to a record level in terms of their size and geographical distribution. The Syrian Revolution 2011 facebook-page estimates the number of demonstrators to range from 3 to 5 million on Fridays and the number of locations to be in tens and hundreds covering the whole country. Most notable development is that the protests are becoming a daily phenomena in many areas. significantly the movement is expanding inside the two largest cities of the country, Damascus and Aleppo involving neighbourhoods likeAl-Mazeh in downtown Damascus and Salah Al-Din inside Aleppo.

The forces of the regime had not been able, after trying for weeks, to bring under their control areas such as Baba-Amrou in Homs City and Khan-Shekhun in the Idleb countryside. These failures of the Assad forces seem to have paved the way for the forces of the Free Syrian Army (FSA) to gain control of a resort town called Zabadani, only 45 away kilometres from Damascus. A few days later they scored a victory temporarily driving out the security forces of the regime in Douma, a suburb of Damascus. This definitely indicated a change in the balance of forces between the regime and the revolution.

The last two days have seen dramatic development. Intense fighting have been taken place all over Syria, most importantly around the capital Damascus, where the defected soldiers claim to have partial control over some areas only 8 kilometres from the presidential palace. Today, officer Maher Al-Na’imi, the spokesperson of the FSA, spoke to Al-Arabia TV said that the forces of the FSA have been strengthened and emboldened, and they continue to be strengthened with fresh daily splits in the armed forces. He mentioned that in the last few hours units stationed in the periphery of Damascus have defected with their military vehicles (tanks etc.). If confirmed this would be the first time soldiers defect with vehicles and heavy artillery.

Al-Na’imi threatened dire consequences if the regime does not stop its attack on the surrounding areas of Damascus or if the air force is used against the defected soldiers, reminding the regime that the presidential palace is within the reach of the FSA, only 8 Kilometers away. However, a military expert from Beirut explained that the regime is refraining from using the air force fearing that the air force itself might defect! Another expert speaking from Cairo made the point that two thirds of the Syrian Army is being kept in barracks for fear of immediate mass defection of they are deployed against the people. Al-Na’imi added that they had information that already around 1500 army officers are in jail due Syrian intelligence forces being to suspicious of their loyalties.

Many of these informations remain unconfirmed, but there are growing indications that they reflect the real situation on the ground. This would indicate a turning point in the Syrian revolution. The regime is frightened. Troops  and tanks were heavily deployed inside Damascus for the first time today, and there are also reports of a number of explosions took place in the Abasi’yn square and Al-Sabeh Bahrat square in Damascus. Also, the road to the Damascus International Airport was cut off for a few hours apparently due to skirmishes between the Assad forces and FSA.  In parallel, the regime deployed its thugs in mass numbers in Aleppo after mass demonstrations broke out in neighbourhoods such as Salah Al-Din and Al-Fourdos. It was reported that scuffles broke out with demonstrators fighting back with stones and their bare hands. One of the regime thugs was reportedly killed by demonstrators and a security bus was wrecked.

In addition to what seems as a rapid collapse of the forces of the regime in the last hours, interesting news have come from the town of Zabadani. For many weeks there has been news of the formation of popular committees and revolutionary councils in areas like Dar’aa, Homs, Der Al-Zor and Idleb, but no concrete details have been available on this matter. Today we saw a glimpse of this process for the first time with a declaration coming from “The Free Local Council in Zabadani”. This declaration is translated in the following paragraph as we received it:

“The Free Local Council in Zabadani:

Having lived in freedom for two months after its youths repelled the violent attack of the Assad gangs aimed at destroying it and sabotaging it, and after persisting in standing in the face of any possible attack upon it, Al-Zabadani sought to build its own democratic experience………..The people of the town gathered to set up an election system based on family affiliation so that each 1000 citizen get one seat. The families agreed to form groups of around 1000 people each, and all components and sects of society participated in the process, most notably the Christians, where a priest delivered a touching speech in the constituent assembly………each family or group of families were asked to elect a representativesfor each of their 1000 members and a general commission was formed, out of which 60 ran for the election of the local council resulting in the formation of a council of 28 members distributed on a number of offices. They elected a president and a secretary and formed a number of offices: political bureau, financial bureau, health and rescue bureau, military and security council, administration and general services bureau. The council and the offices have assumed their duties and the general strike has seized. [apparently there had been an ongoing general strike in the area – ML] The school have reopened their doors and the new flags have been raised, saluted every morning together with slogans for the fall of Bashar Al-Assad and his miserable criminal regime. The Imams of the mosques were replaced by ones belonging to the people and committed to the revolution. A special branch for security and investigations, popular tribunals, and a detention center were formed…..the vehicles of the Free Army put on their special plates and started patrolling and forming groups to control and watch for any potential hostile forces. Committees record the entrance and exit of strangers. Everyone is participating is a massive workshop to prepare what is needed to repel an potential attack, including military, food, and health needs, and also to accommodate refugees asking for safety from the brutality of Shabiha (thugs) and their regime. Also, to provide supplies other ruined cities and villages and help them to be liberated. The city council appointed by the regime was prohibited under the penalty of detention and trial of any authority that does not come to exist based on free elections. The streets and squares were renamed by the names of the dignified martyrs. The clinic of the opposition figure, Dr. Kamal Labawani, was chosen as the centre for the free city council since it is located by the major mosque in the old commercial city centre where demonstrations start and where the first martyrs fell. Democracy is a new experience and a new born baby that needs attention and everyone knows that they are lacking experience and culture of democracy, and that it is necessary to move to the system of parties. But first an atmosphere of freedom is necessary for different party point of views to form and crystallize…..It is a start, and a successful start if God wills. We want it to be the beginning of the liberation of all lands and people of the homeland who are dear heroes deserving all good, respect and support……and God will bring success……..”

What we are seeing in Zabadani is obviously the emergence of an alternative power. The regime no longer has any means of asserting its authority and the masses have created their own democratically elected organs of power. In each and every revolution in the history of capitalism, starting with the Paris commune of 1871, such forms of council power have appeared. In Russian they were called “soviets”. They formed the basis for the revolutionary government after the 1917 revolution and thus the “Soviet Union”. Similar councils have also appeared in the Egyptian and Tunisian revolutions. It is unclear if similar councils have developed to the same extent in other areas of Syria but it is likely. Also, Zabadani has become a focal point of attention for the struggling masses throughout Syria. It is therefore likely that other places will be inspired by it and follow its example. These councils mean the beginning of a situation of dual power, at least at a local level. If these was to develop at a higher level the days of the regime would be over.

Unfortunately, the petty-bourgeois opposition politicians who have appointed themselves as “leaders” of the people, never believe or trust the masses. More concretely, they are afraid of the independent movement of the masses as it threatens their own “leadership” position. Still, after seeing these marvellous development and the iron determination of the masses, the Syrian National Council (SNC), and the General Commission of the Syrian Revolution (GCSR)are both calling for foreign intervention to save the revolution from being militarized! At a time when the masses are taking the initiative and arming themselves, creating their own power, these gentlemen of the liberal opposition are appealing for “peace,” an appeal which amounts to leaving the people unarmed in the face of brutal military repression.

Things are moving quickly. It is difficult to gauge precisely the stage the movement is at. What is clear to many activists in Syria is that there is no turning back. The developing dual power in Zabadani and other places can only be resolved in one of two ways: either the masses seize the initiative boldly, or the regime smashes the movement in blood.

The demands of the day are: