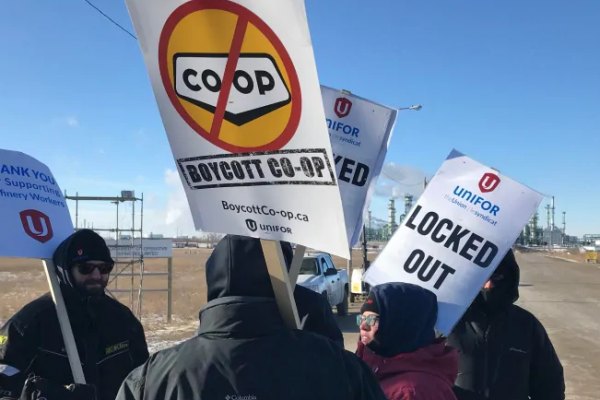 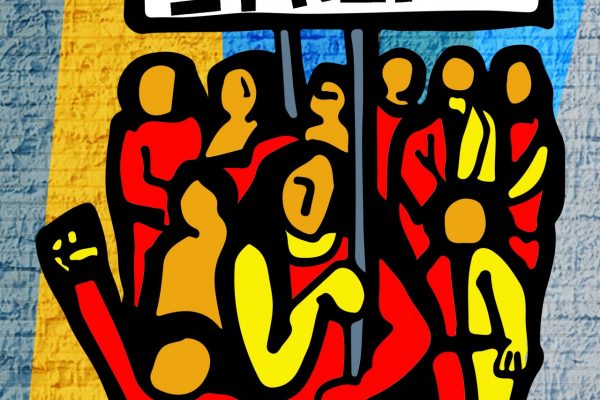 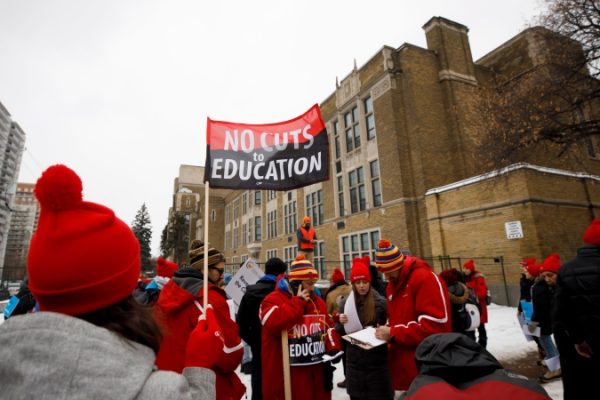 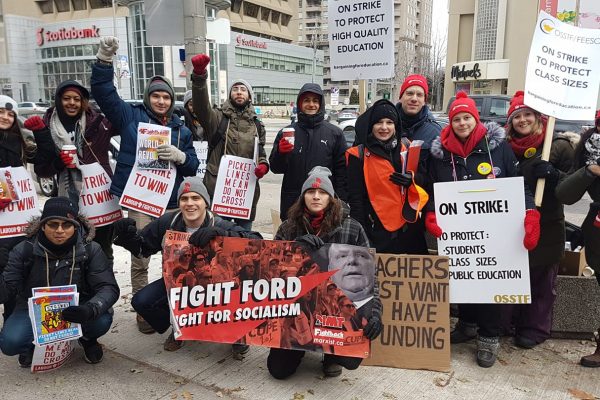 The interests of workers and their bosses are completely opposed. Capitalists reap profits off the backs of workers by paying them significantly less than the full value of their labour. This is the real reason behind the attacks on wages, benefits, pensions, and employment standards that have intensified since the crisis of 2008, and these attacks will not stop until all the gains of the post-war period have been erased. Capitalism has entered a dead end, and the bosses are determined to squeeze the workers in exchange.

In this environment, somehow, many trade union leaders still believe that collaboration and compromise with the bosses is possible. In reality it never was, but even less so now. Rank and file workers want to fight. We know that our livelihoods are at stake, and that the bosses are coming for us. What we need are leaders that are willing to employ class struggle methods in order to fight back and win.

The working class can only rely on its own strength. We can rely only on our own organizations - our unions, local labour councils, regional and national labour federations—and not on any alleged “goodwill” of the bosses or their capitalist courts. Our most valuable weapon is the strike. Through collective action, we can defeat the attacks of the bosses. Our organizations must be used to ensure that every single strike, even of the smallest groups of workers, receives the full solidarity of the entire working class movement - a victory for one is a victory for all! Whether this means solidarity strike action to support fellow workers on strike or mobilizing all of the workers for a general strike, class struggle unionism is the way to defeat the bosses’ assault. We need union leaders who are prepared to break laws meant to break us, including “back to work” and “essential service” legislation.

This principle of workers’ self-reliance applies to political parties as well. The Liberals and Conservatives are the parties of Bay Street. They pass back-to-work legislation, they privatize, they lie, and they enact austerity. For fear of a Conservative victory, some workers’ leaders advocate “strategic voting” for “progressive” candidates. We should be absolutely clear that this is just a pro-Liberal policy by another name. The Liberals are not our friends and cannot be trusted.

The NDP is the only mass political party of the working class in Canada. While the present leadership has been putting forward an uninspiring reformist policy not much different from that of the Liberals, this can be changed, as we have seen with the rise of Jeremy Corbyn inside the Labour Party in Britain. Unions are uniquely positioned inside the party to make this happen - they should use their full organizational weight to push for the party to fight for a bold socialist programme in opposition to the austerity of the bosses’ parties.

Not a light shines and not a wheel turns without the kind permission of the working class. However, our workplaces and trade unions are presently ruled over by a small handful of careerists, bureaucrats and managers who are more interested in their own income and positions than the workers. Rank-and-file workers on the shop floors and union halls, by contrast, know how to best run things, but their opinions and insight are routinely ignored.

For workers’ democratic control of production to replace corporate mismanagement, we must first take democratic control of our unions. In this task, leadership is crucial. Leaders must come from the ranks of the workers themselves, and this organic connection must be maintained at all times to ensure accountability. The salaries of union officials should be no higher than the average wage of the workers they represent, and all positions of authority within the union should be subject to election down to the smallest committee. Furthermore, all positions should be subject to immediate recall whenever a leader refuses to struggle against the bosses or violates the democratic rights of the rank and file.

We need mass participation of rank-and-file workers. Monthly general membership meetings should be the centre of workers’ democracy in our unions! Meetings should be structured and scheduled to allow for maximum participation. Workers should be allowed to put key issues on the agenda and all present should be able to collectively decide with no bureaucratic interference. Mass membership education campaigns should be organized with the aim of informing workers of the importance of being involved, as well as of union history, and the gains that have been won only as a result of determined struggle and sacrifice. The more that we are able to get union members educated and involved, the more we will build a powerful workers’ movement capable of taking on the offensive of the bosses.

Unfortunately things have been moving in the opposite direction. In an attempt to settle feuds between rival bureaucrats, larger national and international unions have been imposing trusteeships and running union locals by decree, stifling the opinions of the rank and file. In opposition to this approach, we say: let the workers decide! Ninety-nine per cent of the time the workers will make the right call if given the opportunity to make an informed decision. Even a wrong decision, democratically made, is better than an enforced directive where nobody learns anything. Only the most extreme situations, like a local being taken over by organized crime, can justify trusteeship.

For Workers’ Unity! Organize the Unorganized!

Unity is strength. We must resist the attempts of the bosses to divide and conquer. It will come as no surprise to any class-conscious worker that management uses gender, race, age, immigration status, sexuality, and so on to set worker against worker. The aim here is to keep us fighting amongst ourselves rather than fighting against our common exploiter. What is surprising, however, is when our union leaders play into this tactic, namely by negotiating two-tier contracts. These agreements give one group of workers a better deal to keep them quiet while another group inside the same union is simultaneously sold down the river. This tactic disproportionately impacts young, female, and immigrant workers, and feeds right into the bosses’ strategy of keeping workers divided. Unequal pay for the same work is a cancer in our organizations and must be driven out.

It is essential that the movement fight against racism, sexism, homophobia, and all other forms of prejudice. But we cannot do that by using tokenism and quotas that do nothing to concretely fight oppression and which can play into the hands of the bosses to divide us further. We don’t want an equality of poverty, taking from the poor to give to the poorer. We want to take from the boss who exploits and oppresses, and equalize up. We propose mass, class-struggle methods to combat every instance of oppression. An injury to one is an injury to all!

Trade unions are the basic organizations that the working class uses to fight capitalist exploitation and build its power. At present, however, only a minority of workers belong to a union. Ironically, it is the most exploited workers who stand to gain the most from unionization, but who have the biggest barriers to joining. Our strength, however, is in numbers. We call on our labour leaders to expand the union of workers through mass unionization drives. Organize the unorganized!

Similarly, trade union leaders must break out of the narrow mentality of only fighting for the conditions of their own members. This again plays right into the hands of the bosses, who are then able to portray unionized workers as “greedy”, setting the greater non-unionized mass of workers against them in the process. Instead, organized workers should campaign and bargain for demands that improve the conditions of all workers. Transit workers must fight for free public transport, education workers for free tuition, etc. Through an organized struggle for the benefit of all, we can unite the overwhelming majority of workers in a common struggle.

Not only are the majority of trade union leaderships failing to pursue the strategies and tactics that can win, but some are even resorting to raiding other unions. An age old scourge within the labour movement, raiding involves unions poaching already unionized workers from other union locals. This is a complete waste of time and resources and our unions should be dedicating their efforts to organizing the unorganized. This approach epitomizes the perspective of narrow, self-serving business unionism which only weakens the movement as a whole and therefore plays into the hands of the bosses. The way to stop raiding is to put power in the hands of the rank and file to fight bureaucracy. When the workers have the power to decide for themselves they will reject the raiders, and revolutionize their own organizations.

Marxists fight day in, day out for every improvement in the living conditions of the working class. However, we know that as long as we live under a capitalist system, the greedy thirst for profit will compel the capitalists to continuously attack us with no remorse. If we look at the last decade alone, we see nothing but a trail of wage freezes, privatizations, cuts to social services, layoffs, and a drift to ever more precarious employment. We say: ENOUGH IS ENOUGH! Capitalism doesn’t serve working people. It is a vehicle by which the rich get richer at the expense of the majority. We need to build a socialist workers’ movement to fight against the capitalist system which is the root cause of all of our misery. If the capitalists are closing factories because they care more about their profits than what is best for the community, we say: A FACTORY CLOSED IS A FACTORY OCCUPIED! We demand nationalization under democratic workers’ control to protect union jobs.

While capitalism inevitably leads to a more and more desperate situation for the vast majority of people, socialism provides a solution to our problems. Instead of a tiny minority of fat-cat CEOs controlling our lives, working class people—the ones actually involved in the productive process—can and should run the economy. By taking the ownership over economic production out of the hands of the giant private monopolies, and putting it under democratic workers’ control, wealth and productive capacity can be used for the betterment of ordinary workers who already best know how to run it.

Socialism would allow us to achieve a 32-hour work week with no loss of pay, voluntary retirement at age 55 with full pension, and a living wage of at least two-thirds the average wage. We would be able to fully fund our healthcare system and end its creeping privatization. We could eliminate student debt and offer free post-secondary education so working class youth would have the opportunity to get educated and develop themselves. We would massively expand the public transportation network, making it accessible and free to aid all workers in getting to work. With socialism we would be masters of our own destiny.

We desperately need a workers’ movement that fights back. Join our fight for class struggle unionism, workers’ democracy, and socialism!