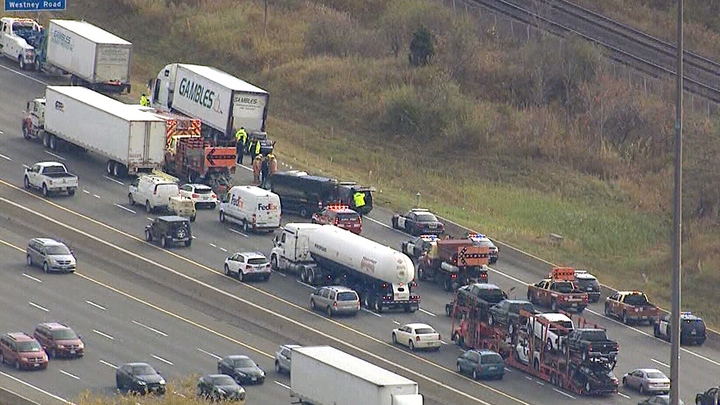 The King’s Highway 401, commonly known as the 401, traverses 828 kilometres of southern Ontario starting in Windsor and ending at the Quebec border where it becomes Autoroute 20. In Toronto, it widens to 18 lanes and becomes the busiest highway in North America and the world’s busiest truck route. It also continues to be, since its completion in 1968, the scene of horrific truck accidents with multiple deaths, not only from the initial collisions, but also from the resulting fires and explosions.

The drama of some of these accidents draws media attention; however, most accidents involving trucks on the 401 and the other 400-series highways are either underreported, not reported at all, or are only mentioned in the traffic report.

This all changed in 2017, when several events came together to keep the story in the news for more than a week. On Oct. 27, the commissioner of the Ontario Provincial Police (OPP), J.V.N. “Vince” Hawkes, held a media conference to announce criminal charges against four truck drivers who were involved in separate accidents that killed 10 people. Three of those accidents occured within a week of each other. All but one had been on the 401.

The Commissioner gave data to illustrate the gravity of the problem:

In the four accidents that were the subject of the charges, the drivers of the trucks had run into other vehicles that had stopped or slowed down for either construction or previous accidents.

The day following the commissioner’s conference, on the 401 near Cambridge, Ont., a tractor trailer rear-ended another tractor trailer which in turn collided with a dump truck. One man died. Once again, traffic had slowed prior to the collision.

Only four days later, just south of Barrie on the highway 400, traffic slowed due to an accident involving an alleged drunk driver and vehicle rollover. The subsequent wreck of four transport trucks, two of which were tankers, and 10 other vehicles sent a fireball into the sky and burning fuel rolling down the road.

Three people died that night, but Commissioner Hawkes noted it could have easily been as many as 25.

However, the problems with the trucking industry are far greater than can be solved by law enforcement.

The North American Free Trade Agreement (NAFTA) between United States, Canada and Mexico depends on low freight rates. Fruit and vegetables once grown less than one hour from Toronto are now shipped thousands of kilometres from Mexico, California and Florida. In the Globe and Mail on May 31, 2017, Eric Atkins describes in his article, NAFTA SNACK, how Ontario corn now crosses the border four times during processing, before it returns to Ontario stores in the form of snack mix. The great distances these products have to travel encourages businesses to rely on cheap trucking to reduce costs and maintain their profits.

The quest for what the capitalists call “efficiency in trucking” began in the U.S. with the passage of the Motor Carrier Act in 1980, which marked the beginning of trucking deregulation. During the prosperous post-war period, truck drivers had become heavily unionized, most of them belonging to the International Brotherhood of Teamsters. This soon came to an end. By the time the US and Canada signed their free trade agreement in 1988, virtually all truck regulations, except some concerning safety, were gone. Also gone were the unions in long-haul trucking.

Deregulation opened up long haul for non-unionized companies, launching a race to the bottom for who could provide the cheapest rates.

Breaking the unions was to have a devastating effect on wages. Money magazine reported an extreme drop in the U.S. In 1980, truck drivers made $110,000 a year in today’s dollars.  Comparably, they were making $40,000 in 2016 “working harder, longer hours, and with less job security.”

Along with deregulation came the full force of capitalist propaganda. When you enter any Ontario truck stop, you pass at least a dozen different glossy magazines selling the capitalist dream. In these magazines are to be found pages of ads for companies wanting to recruit you to work as a truck owner/operator, touting the benefits and so on.

In reality, the capitalist dream for truck drivers has become a living nightmare. By becoming an owner/operator, you are assuming all the risk, maintenance, financial obligations, and paperwork that the carrier doesn’t want to do or pay for. You are then essentially indentured to your company, spending countless days working in a confined space which, in most cases, is no bigger than a jail cell.

As an owner/operator, you are paid by the kilometre driven. This means that if the truck isn’t rolling, you aren’t getting paid. Even if you drive a company truck and are paid at a lower rate, you still get paid by the kilometre. This fact, greater than all others, is why our highways have become so unsafe.

In Ontario, as a concession to safety, the government required all commercial trucks to be regulated so that their speed does not exceed 105 km per hour. That is why you will see trucks on the 401 driving at 105 km per hour whether it is raining, foggy or snowing. If the driver slows down to safer speed levels, they lose money. This is also the reason trucks crash into slowing traffic.

Not only is shipping made dangerous under capitalism; the ownership structure of the industry ensures trucks are underutilized.

It would seem absurd to suggest that airline pilots should park their planes every night while they rest. Yet this is accepted in trucking because of the need of the bosses to tie truck drivers to their trucks and the debt that comes with it. The bosses win in two ways: they don’t have to finance their fleet, and their drivers can’t leave without declaring bankruptcy.

Our governments look after the interests of the owners of the carriers first, even if it makes our roads unsafe.

On June 25, 2016, there was a fiery crash on highway 400 involving three tractor trailers and eight other vehicles. Four people died, including three from one family.

The next week, the Ontario government held a media conference to announce that there were going to be new standards for students studying to be truck drivers. Ontario Transportation  Minister Del Duca stated that, in a year’s time, prospective truck drivers would have to study for 100 hours at provincially licensed driving schools before being allowed to take their driver’s test.

“Ontario is leading the way in terms of further improving highway safety and helping the industry to ensure it has an adequate supply of consistently trained, quality new drivers in the future.”

Not mentioned in either statement is the fact that the new minimum training period standard of 100 hours is about half the time that is provided at the province’s most reputable schools—nor was it mentioned why training had been left unregulated for decades.

Also not mentioned is how in 2012, the Ontario Trucking Association and the Ontario government lowered standards so that it would be easier for unskilled drivers to acquire a license by allowing people to take a tractor trailer license test with a vehicle equipped with an automatic transmission. Sending truck drivers onto the road who haven’t mastered the skill of operating a truck with manual transmission is deadly and irresponsible.

Reforms by government and industry have been piecemeal and ineffective in appeasing concerns about safety. The only ones who have benefited are the truck companies and the capitalist enterprises they service, at the expense of everyone else.

The desire for safe highways is contrary to the needs of capitalism, which requires cheap shipping costs.  Deregulated cheap shipping in Ontario has brought horrendous social costs, with a body count measured in the hundreds. Six months into the year, 2018 is turning out to be an even more dangerous year for Ontario roads. Thus far, there have been more than 3,000 collisions involving commercial vehicles and a 25 per cent increase in fatalities involving commercial vehicles. We need to end the profit-driven carnage on our roads by giving truckers good unionized working conditions. We need to change the economy to safe and rational needs-based production, and leave unsafe and exploitative capitalism in the dirt.