As of midnight on May 31, the Trump administration has delivered on its threats and imposed tariffs on imports of Canadian steel and aluminum. The tariffs amount to 25 per cent and 10 per cent, respectively. Mexico and Europe have also been targeted. 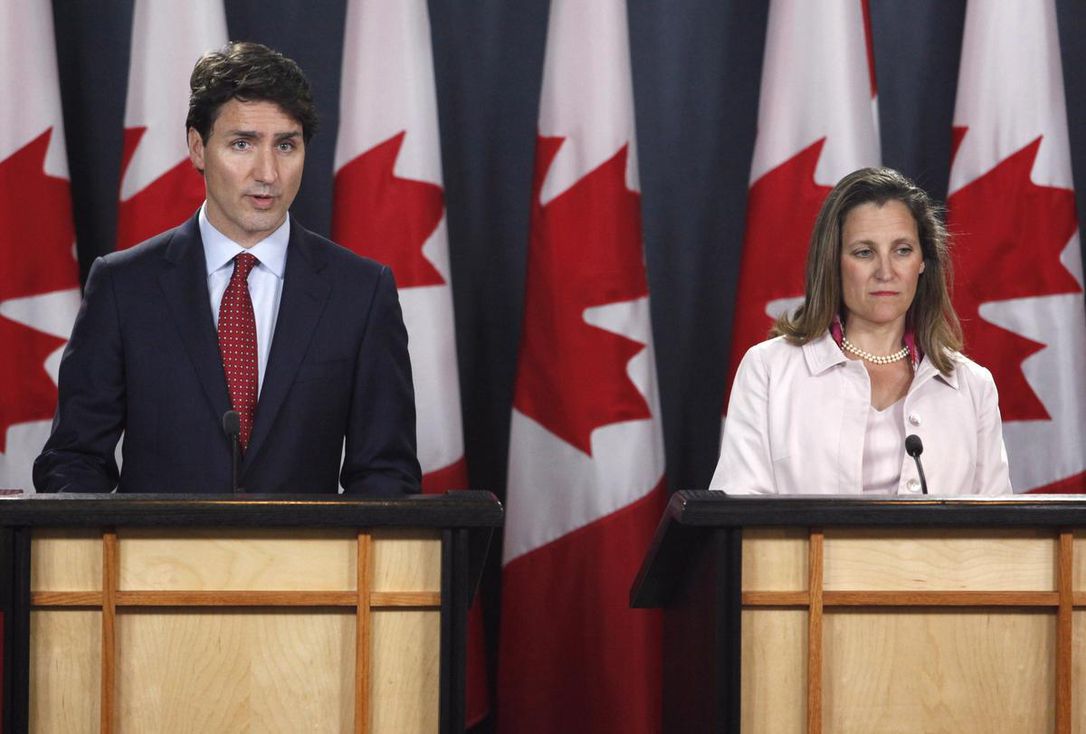 Things now appear to be heading rapidly in the direction of an all-out trade war. Only a few weeks ago, Foreign Affairs Minister Chrystia Freeland was touting the “constant progress” being made in NAFTA talks with the United States and Mexico, and announced they were “close to the final objective.” Now that so-called progress has gone into reverse.

Canada and Mexico have encountered numerous difficulties in negotiating with the US administration over the previous months. Trump is an ardent protectionist, and has insisted on higher U.S. auto content in cars, among other demands. Canada and Mexico, which have formed a de facto united front against the U.S., hoped Trump might back down from some of his demands as talks pressed on. He has not.

The recent furor was sparked after a call made by U.S. Vice President Mike Pence to Prime Minister Justin Trudeau on Tuesday. Trudeau described the lead-up to his conversation with Pence a few days after:

“I stated that I thought we were quite close to reaching an agreement, and perhaps the time had come for me to sit down with the president in Washington in order to finalize the NAFTA agreement. We already had the bones of a very good agreement for all parties, and I thought it might be opportune for all of us to sit down for a few hours and discuss it.”

Trump liked the idea, according to Trudeau. But then came the call from Pence:

“I had to agree to a sunset clause in NAFTA, which is to say every five years, NAFTA would come to an end unless the parties decided to renew it, which is completely unacceptable to us. So I answered that, unfortunately, if that was a precondition to our visit, I was unable to accept — and so we did not go to Washington for that day of negotiations.”

Two days later, the announcement came from U.S. Commerce Secretary Wilbur Ross that tariffs would be imposed as of midnight that day. According to Ross, this was meant as punishment for the lack of progress in NAFTA talks. In reality, this is the U.S. administration’s attempt to force a deal on Trump’s terms. Up until now, Trump has been holding a gun to Canada and Mexico’s head. Now he has shot them both in the foot.

The reaction was one of shock by Canadian industry. The U.S. is the largest purchaser of Canadian steel and aluminum, with nearly 90 per cent of Canadian steel being destined for the U.S. market. Some estimate that the economic impact on Canada could total $3.2 billion U.S. per year. The Canadian economy is already on shaky foundations, and a burgeoning trade war with its largest trading partner might be the thing that tips it over the edge.

This didn’t stop the Trudeau administration from almost immediately introducing retaliatory measures against the U.S. The same day that the tariffs were announced, Freeland unveiled a list of counter-tariffs affecting $16.6 billion worth of American exports. The list included American steel and aluminum, as well as a motley collection of other exports originating mostly from U.S. states where leading Republicans are in office.

For example, whiskey and yogurt are two products being slapped with tariffs by the Canadian government. This will pose a threat to the dairy industry in Wisconsin and the bourbon whiskey industry in Kentucky, two states which are represented by Paul Ryan and Mitch McConnell, respectively. Trudeau hopes this will force leading Republicans to put pressure on Trump to withdraw his tariffs. However, it could just as easily stoke the flames of an even deeper trade war.

Trudeau says he hopes that “common sense will prevail,” but protectionism has a logic of its own. Once tariffs are erected, other countries have no choice but to respond in equal measure, lest they lose market share to their competitors. Open trade used to be the “common sense” of the post-Second World War international order. Now all that is being unravelled. Trade barriers are being erected everywhere as the ruling classes of different countries desperately attempt to shelter themselves from the global crisis and put a lid on discontent at home. The so-called “international community” is now engaging in an all-out bloodbath, where yesterday’s allies are turning against one another in order to come out on top. A headline in the Washington Post the other day revealed that “Trump has officially put more tariffs on U.S allies than on China.” This is the new normal.

Despite their efforts, protectionism can offer no way out of the crisis. Trade barriers will only lower the global level of productivity, drive up prices for consumers, and intensify the contradictions which led capitalism to this point. By gradually removing themselves from the world market, they are only paving the way for greater economic crises in the future. This is exactly how the capitalists behaved after the crash of 1929. The results today will be no different.

As Marxists, we are neither supporters of free trade nor protectionism. They are two sides of the same rotten coin. In either case, it is the corporations who benefit, while workers everywhere are left in the lurch. The Canadian government claims they are “standing up” for Canada’s aluminum and steel workers by introducing tariffs on American imports. But where were they when steelworkers at Stelco were having their pensions stolen by their bosses? In reality, it is the interests of Canadian big business, and not Canadian workers, that they have at heart. Defending the profits of the bosses offers no guarantee that our own lives will improve. Capitalism, in all its forms, can offer no way out for the working class. Free trade has resulted in the offshoring of production to low-wage, non-union jurisdictions. Protectionism will result in higher costs for consumers. In both cases, it is only the super-rich who benefit.

There is only one way out, and that is through a united struggle of Canadian, American, and Mexican workers against all the exploiters at the top. Workers could not care less about which gang of thieves makes off with the most profits. What workers  are interested in is decent jobs and an affordable cost of living. If a plant is shut down and well paid jobs are lost due protectionism, our foremost concern is the defence of those jobs and the livelihood of the workers it impacts. If a plant is offshored due to free-trade policies, our concern is again the defence of those jobs. If the capitalists are unable to provide this, the workers have no option but to take matters into their own hands and take over the plant to save those jobs.

To this end, we call for all companies at risk of being shut down to be expropriated and placed under democratic workers’ control. This would preserve the jobs and production, and give workers the ability to build cross-border solidarity to solve the crisis from the bottom up and not the top down. Instead of Canadian workers uniting with Canadian bosses against American and Mexican workers, we call for militant tactics that unite all workers against all bosses.

Neither capitalist protectionism or capitalist free trade is the solution. It is capitalism that is the problem and workers will face the effect of these crises as long as capitalism exists. In the final analysis the solution to the jobs and trade crisis comes from building a socialist union between the workers of the region. A Socialist Federation of the Americas could integrate production across borders to satisfy everyone’s needs. For the first time, we could harness the wealth being concentrated at the top, and use it to provide a decent living for all people, whether they be Canadian, American or Mexican. To us, a worker is a worker. We are not each other’s enemies. We have common aims and, more importantly, a common enemy: the capitalists who are robbing all of us blind. They have taken their fight to each other’s doorstep. Soon enough, we’ll take it to theirs.