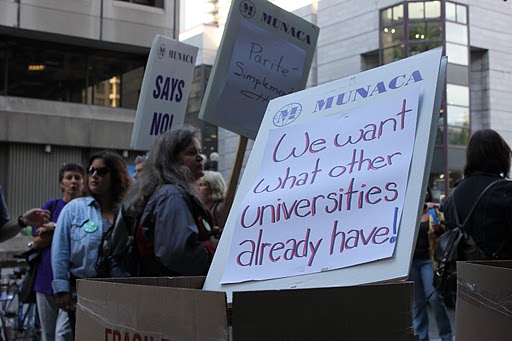 It has been nearly a year since the McGill University Non-Academic Certified Association (MUNACA) began negotiations with the university administration for a new contract.  By November 2011, MUNACA workers will have been on strike for two months, and the only movement from McGill so far has been to increasingly restrict the freedoms of its own employees as they attempt to get their voices heard and negotiate a fair contract.  Most recently, MUNACA and McGill broke off talks as the union’s key demands received no recognition from the university.  The situation is rapidly coming to a head.

The focus of the negotiations for the past 11 months have been on two key issues.  The first is the security of pensions and benefit plans, which currently have no protection.  The administration at McGill has the power to determine and implement the changes they wish without any consultation.  At UQAM or the Université de Montréal, the union and management must agree on the pension plan before any changes can be made.  In late June of this year, even as negotiations were ongoing, the university announced that it was making further adjustments to MUNACA’s pension and benefit plans — forcing employees to pay more for their pension plan, drastically increasing the health care burden for retirees, and eliminating dental support for the same group.  All this was done without any consultation or approval from the union.

The second central issue in the fight is related to wages and wage scales.  The union has been asking for a general wage increase which would put them on par with other universities in Quebec, meaning an increase of approximately 3% per year for three years.  The university management is countering with a 1.2% per year increase, a lower rate than under the previous collective agreement and one which doesn’t even keep up up with the rate of inflation.  Furthermore, unlike most other unionized workers (including many of those at McGill), non-academic staff would still not receive protection or premiums for working evenings or weekends under the administration’s proposed plan.

Even more revealing, however, is the wage scale that currently exists for MUNACA workers.  At most universities in Quebec, a worker at a similar job could work their way from a starting salary to the highest possible pay in as little as three years, and at most, in 14 years.  Workers at McGill must work their way up the pay scale by 1% per year, which in some cases can take 37 years to reach the top.  The administration has remained inflexible on this point, except for offering to let the union receive wage scale increases from part of the 1.2% they are proposing.

Throughout the course of these negotiations, the McGill administration has remained obstinate and unyielding.  Their proposals for wage increases, for pay scales, and for the management of pensions and benefits has remained fundamentally unchanged in the many months they have been negotiating.  As the strike has progressed for the last 10 weeks, McGill administrators have been adamant in asserting that progress will only be achieved at the negotiating table, and that no outside pressure will have an effect.

Since the MUNACA strike began on 1st September, the university has been determined and energetic in doing everything but negotiating in good faith.  On the 23rd of September, McGill secured an injunction preventing MUNACA from picketing in groups greater than 15 people, and within four metres of certain properties.  This first injunction was to last ten days.  After the union moved pickets to the houses of certain administrators, the next injunction forbid them from coming with 25 metres of those places — and only in groups of three.  When union members tried to picket the offices of members of the board of governors, they received another injunction requiring them to keep three metres away.  And from the original duration of ten days, the injunction has been extended until 21st January 2012.

In its dealing with students in regards to the strike, the administration has been no more considerate.  Students wearing the green MUNACA pin in solidarity were repeatedly told by security that this was not allowed.  Graduate students attempting to petition for support for the union were told that this was forbidden.  Peaceful student demonstrations in support of MUNACA were videotaped or told to disband, or both.  In October, two undergraduate students were summoned to disciplinary hearings for attending such an action, despite the fact that one of them was not even physically present.

It is important, however, to understand the context of this struggle.  McGill University has had many disputes with its own workers, and has fought vigorously against the formation of each new union in the past decade, most recently in the case of the 1,500 course lecturers who recently organized.  During the teaching assistants’ strike in 2008, the administration pressured faculty and students to cross the picket line and perform scab labour, while simultaneously harassing and firing those striking workers who had second, non-unionized jobs on campus.  That strike, however, was largely successful, with the university eventually giving in.

The spring of 2008 was, however, a very different time from today.  Months after the TAs pushed back the administration’s attacks, the world entered into what has become the worst financial crisis since the Great Depression.  Today, nearly every government across the world is confronting an enormous debt problem, and confronting it in the same way — by uniting in the name of austerity and budget reduction, all at the cost of the workers, the students, and the youth.  All around the world, people have been coming out, like the striking workers of MUNACA, to fight against these attacks.

Events at McGill are taking place at the centre of converging events.  The course lecturers, recently unionized, are negotiating their first collective contract.  TAs and invigilators have begun pressure tactics after months of negotiations with university management have gone nowhere.  And students, across the province, are mobilizing against rising tuition and cuts to the quality of education.  It is becoming increasingly clear that these separate fights are all part of the same struggle.  During the student strikes and demonstrations on 10th November, MUNACA marched with students from McGill as they joined students across the city to protest tuition hikes.

McGill University has been on the front line of attacking workers and instituting austerity.  In the last academic year, McGill University fought for, and won, the right to deregulate tuition for MBA students — increasing fees from $2,000 to $29,500 per year.  The Quebec government has been enthusiastically cutting public spending and raising the costs of services, with many of those attacks aimed squarely at students.  Tuition fees are set to increase by approximately 75% over the next five years.  McGill’s attempts to deregulate and privatize its own institutions harmonize perfectly with similar actions across the country and around the world.  Indeed despite, or perhaps because, of the fight that the university is in, it has earned recognition in Maclean’s and Times Higher Education rankings.

For universities in the province and the entire country, McGill stands on the front lines.  If the administration at McGill is beaten back and the union prevails, this will not only be an economic success for workers — it will also be a political victory.  Quebec workers would be inspired in their own struggles if MUNACA is able to win a fair and decent contract from McGill University of all places.  The business elite of Quebec and Canada are watching McGill with hopeful eyes, waiting for the first victory to bring in the upcoming wave of austerity.

McGill is therefore in a powerful position, but also a dangerous one.  Their crude attempts to silence free expression and their heavy-handedness in dealing with their own employees is not simple clumsiness — it is desperation.  Which means there is also a great opportunity here, for MUNACA, for every worker and student at McGill and across the province.  The fight is here, now, and we need to focus our efforts here.  A defeat is another step on the way to cuts and austerity, but a victory against this administration is the beginning of a victory against all that it represents.