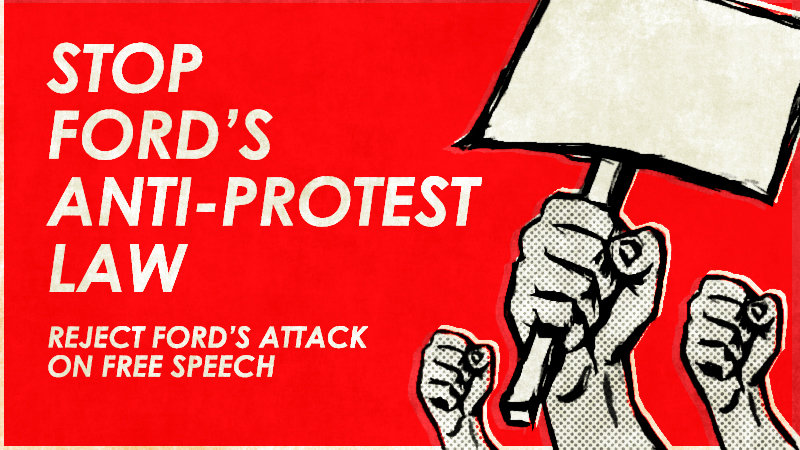 On Aug. 30, Doug Ford announced he would be forcing universities to adopt an Orwellian “free speech” policy. This is an attack on freedom of speech and aims to crack down on student protests. Under this new policy, student activists will face discipline and possible expulsion for simply protesting racist speakers on campus. This includes our own Socialist Fightback activists.

Sign the petition, and let Doug Ford to keep his hands off our democratic rights:

For background on Ford’s anti-protest law, read our article here.

Full text of the petition:

This policy is an attack on freedom of speech and aims to crack down on student protests.

Ford’s directive cites the University of Chicago statement that prohibits “ongoing disruptive protesting”. But such vague criteria leaves the road open to prohibit all protests. Who decides what period is too long? Who decides how big a protest can become before it qualifies as “disruptive”?

Ford is promoting this policy as payback to the far right and social conservatives who helped him win the PC leadership race. It will provide a police-protected “safe space” to anti-abortionists holding obscene displays, alt-right racists, and those denying the Holocaust.

This policy is a direct attack on the time-honoured tradition of civil disobedience on campus. We encourage universities and student unions to refuse to participate in this anti-protest policy, especially the anti-free speech, University of Chicago-inspired statement.