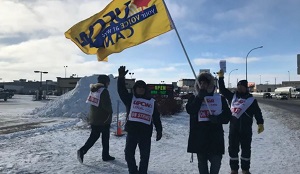 The Saskatoon Co-op strike by members of the United Food and Commercial Workers (UFCW) Local 1400 is now in its fifth month. After talks between the company and the union broke down on Feb. 11, UFCW Local 1400 called for binding arbitration to resolve the strike. As of this writing, Saskatoon Co-op has not responded to the offer.

The strike began on Nov. 1, when more than 900 Saskatoon Co-op employees walked off the job after a two-year contract dispute. The issue of two-tiered contracts was central to the strike, which followed a walkout of approximately 200 employees at the Moose Jaw Co-op on Oct. 2. In the case of the Saskatoon Co-op, UFCW Local 1400 rejected a contract offer that would have seen the wages of new hires slashed by $8,000 per year. The decision to put up pickets marked the first time Saskatoon Co-op employees had gone on strike in 35 years. While the Moose Jaw strike was resolved on Nov. 7, the Saskatoon strike has proved a far more protracted battle.

The demand of the Saskatoon Co-op for wage cuts by its employees is particularly egregious given that its parent firm, Federated Co-operatives Limited (FCL), reported a record $1.1 billion in profits for 2018. Well-paid FCL executives declare that new employees must accept lower pay than existing employees for doing the same work — the same kind of two-tiered contracts that have been increasingly forced on workers in recent decades. Two-tiered contracts are a cancer within the labour movement that must be opposed at all costs. They weaken unions from within by sowing divisions between older and younger members, reducing the collective strength of unions and the labour movement as a whole.

Unfortunately, the contract that was agreed upon after the conclusion of the strike in Moose Jaw preserved a two-tiered wage differential. Similarly, the leadership of Local 1400 in Saskatoon have said that they are willing to accept two-tiered contracts, provided the difference between the tiers is not too large.

Saskatoon Co-op believes it can wait out workers who have been standing on picket lines throughout the frigid Saskatchewan winter. It has managed to keep stores open with the aid of 300 “replacement workers,” i.e. scabs, and management claims that 200 UFCW members have also crossed picket lines. The company demands that the union capitulate and accept a two-tiered wage scale, which will only further weaken its strength and collective bargaining power.

Even the compromise of binding arbitration that union negotiators are now requesting has met with the company’s arrogant refusal. The latest proposal by the union’s negotiating team calls for “a bridge that provided a limited number of employees who had been working at the Co-op for four years, to finally move over to the main wage grid.” Such arrangements, however, do little to stop the corrosive effects of two-tiered contracts on workers’ unity.

The continuing fight of UFCW Local 1400 members at the Saskatoon Co-op must be supported by all workers and youth who face the continued erosion of wages and living conditions represented by two-tiered contracts. The Saskatoon Co-op include stores in Saskatoon, Martensville, Warman, Colonsay, and Watrous. Since the onset of the strike, pickets have seen visits from “security guards” employed by the “private security firm” Evident Corporate Investigations. Picketers have reported Evident personnel following and intimidating them, threatening to have workers’ vehicles towed, and refusing to present their licenses as required by law.

Workers cannot allow themselves to be intimidated. The fight of Saskatoon Co-op employees against two-tiered contracts is only one part of a larger fight that affects all working people: the struggle for a living wage.