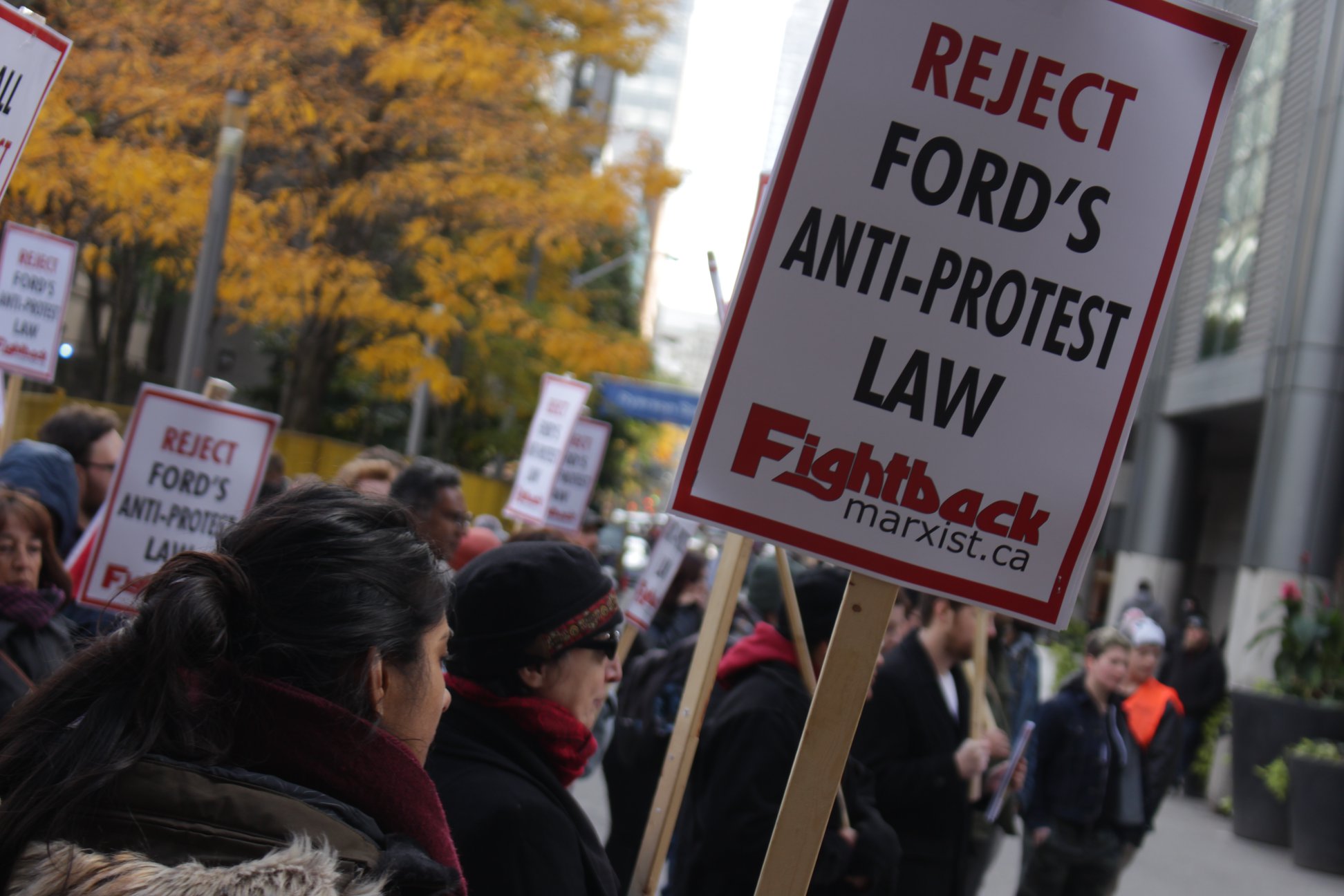 On Oct. 24, the Ryerson University Senate hosted a town hall on campus to get feedback on their forthcoming anti-protest policy, something which the Ford government has required all universities to implement by January 1, 2019. This town hall was poorly attended, which is unsurprising given no efforts were made by the Ryerson Senate to publicize the event. No e-mail was sent out, no posters went up and no flyers were handed out. A Google search for the town hall turns up no results. This is especially scandalous given that there has been clear opposition, from both students and faculty, to the proposed policy. Just last week at Ryerson, a rally of over 100 people was held in opposition to the anti-protest law.  In contrast, the total attendance was no more than 25, and that is perhaps being generous. The majority of those at the town hall were bureaucrats, professors, and the senators themselves. The students present were those who stumbled across the event on their way to class. Five members of Socialist Fightback at Ryerson (SFR) and a handful of our supporters were present, having assembled our contingent after learning about the town hall from a supporter with access to internal Senate information. SFR was forced to act as the voice of students at the discussion, since we alone knew it was taking place.

During the discussion, SFR president Hermes Azam raised his hand to speak. Azam started by informing those in attendance of the shameful and undemocratic way in which the Senate has handled this issue. Senators have suppressed information on the policy, and have gone to great lengths to limit debate — actions which SFR have brought to light elsewhere. Before Azam could continue, one of the hosts of the town hall, Michael Benarroch, who is the vice president of Ryerson and also a senator, interrupted him and stated that he was not allowed to speak about the Senate. This is despite the fact that it was the Senate that drafted the policy in the first place. Azam aked Benarroch why students weren’t allowed to speak about the body that drafted the policy, and also why debate was being stifled at a so-called “democratic discussion”. Azam received no response. The microphone was then physically ripped out of his hands. These senators didn’t seem to grasp the irony of shutting down debate at a discussion on “free speech.”

Members of the audience started shouting “shame” as Azam was forced to return to his seat. At this point, a young law student who had stumbled upon the discussion while traversing the campus stood up to denounce the stifling of debate at a town hall which was organized to discuss freedom of expression. At one point she even pulled out a copy of the Canadian Charter of Rights and Freedoms from her pocket to make her case! She finished her almost 5-minute long speech by demanding the senators allow Azam to speak. The senators, who had realized that much of the audience had turned against them, then back-peddled and allowed Azam to go up once again. Azam returned to an audience that was disgusted by the way the senators had just openly denied a student the ability to speak. He laid out a balance sheet of the last month and explained how the Senate has been avoiding genuine debate and community input on the proposed policy. This started with the October 2 Senate meeting, where over 20 Ryerson community members turned up to discuss the policy and share their concerns with the Senate. The agenda for that meeting was not released to the Senate website until 11am that same day. Students were therefore given only six hours notice for a discussion on a policy that, if implemented, will have a dramatic impact on their rights. During the meeting, community members sat patiently for over an hour before the anti-protest policy was finally brought up. The Chairperson of the Senate, Mohamed Lachemi, who is also the President of Ryerson, gave a brief one minute overview of the policy and then shamelessly attempted to skip to the next agenda point without informing those in attendance that they could speak. This was a slap in the face to the community members that had taken hours out of their evening to discuss the policy. Community members were only given a chance to speak after a Socialist Fightback activist demanded to know if they could do so. Not a single senator responded to any of the concerns which were then raised by community member after community member.

Azam pointed out that the October 24 town hall was also hidden from the Ryerson community. He asked the senators, “How are students supposed to express their views when the already limited opportunities to do so are not communicated to them?” Azam also mentioned that, although certain language in the policy had been changed in recent weeks, the content remained exactly the same. The original draft asserted that students may not “obstruct” or “interfere” with views that “may create harm” on campus. The Senate later changed this to “prevent,” a change which reflected the pressure from protests organized by our activists. However, no amount of wordsmithing can change the fact that this policy remains a tool in the hands of the administration to suppress left-wing student organizing and protests against racist, sexist, and fascist ideologues on campus. Azam concluded by stating that, “This policy is unacceptable, we will continue to fight it and we will continue to protest it.” He was met with loud applause from the students in the audience, which compelled the senators to allow more of our supporters to speak.

One of these was Mitchell Thompson, who criticized the policy for its vague language and for providing protection to extremist speakers. Thompson made a strong case against the usage of the word “prevent,” explaining how the word could be interpreted in numerous ways. He used the example of a counter-protest against Faith Goldy, a white nationalist, at Ryerson last year. Socialist Fightback helped to organize and spoke at that protest. He explained how overnight, the Facebook event page had 4000 people clicking “going” or “interested”. This alarmed the administration, who then cancelled the Goldy event in fear of potential clashes. At no point did Socialist Fightback demand that the administration shut down Goldy’s event. This was a decision made by the administration itself. Thompson pointed out, however, that this protest could be interpreted by future administrations as having “prevented” Goldy’s event. Thompson asked, “Would we have faced persecution for our protest under this new policy?” He explained that this policy is, simply put, an anti-protest law. He mentioned that there are already policies in place that prohibit things like assault. The only purpose of this new policy is to limit student dissent against right-wing speakers.

Emily Duffy also spoke on behalf of Socialist Fightback. She posed a firm choice to the senators present, “Ryerson University must decide whether they will defend the rights of students to protest the views of people like Faith Goldy and the Proud Boys, or whether they will choose to appease Doug Ford.” Sadly, no appropriate answer was given.

It is clear that the purpose of this town hall was not to generate discussion and solicit input. Rather, it was organized behind the backs of students so that the senate can claim in the future that they did in fact provide opportunities for community input. The fact that the senate attempted to limit discussion during the October 2 meeting, kept quiet about the town hall, and then shut down debate at that town hall, demonstrates clearly the undemocratic nature of this body. They are not interested in genuine debate, nor are they interested in free speech. Their only interest is in rushing to meet Doug Ford’s January 1 deadline, and faithfully carrying out this government’s mandate.

Join us November 6, 4pm to 7pm as we protest the implementation of this policy at the next Senate meeting. You can find the Facebook event page here. We want to bring out as many students and community members as possible to expose the hypocrisy of the Ryerson administration and to force them to reject Ford’s attack on student rights. The Senate Chamber is in the Ryerson Podium Building, 60 Victoria Street, in room POD-250. See you there!