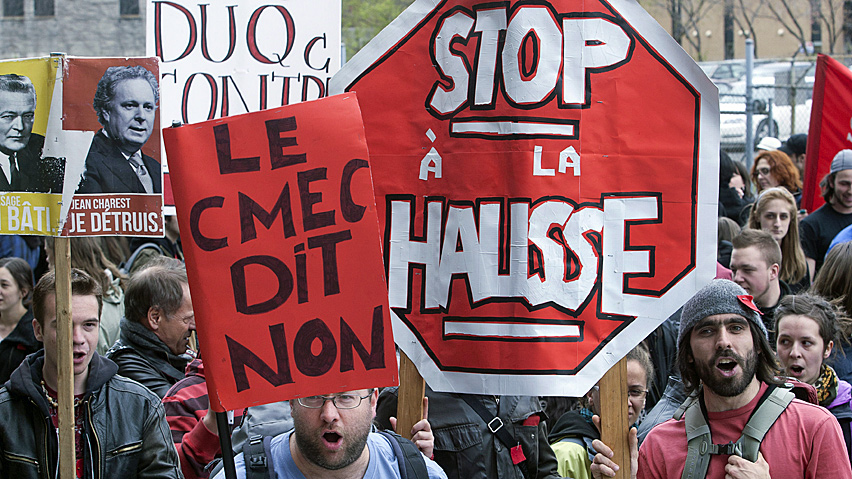 The past two weeks of the Quebec student strike have brought an intense roller-coaster of events. The Quebec government put forward an offer that would “find a way out of the crisis”, but which did nothing to resolve the issue of the proposed tuition increase. The offer was massively rejected in assembly after assembly across Quebec. Then, on Tuesday the 14th of May, there was the surprise announcement by education minister Line Beauchamp, who was not only quitting her ministerial post but also giving up her seat in the National Assembly — reducing the Liberal government’s majority to just one seat. Today, the government seems in a frenzy to smash the students. The provincial police have charged picket lines and arrested dozens. This government is a wounded animal lashing out.

Bloody battle and a trick for an offer

The first major intervention by the Sureté du Québec (SQ) provincial police in this strike was during the weekend of the 4th of May, during the Quebec Liberal Party’s convention in Victoriaville. It was moved there to avoid protesters in Montreal. However, dozens of buses brought students to this small town, which became the site of intense battles with the police. The provincial force had not been seriously involved until this point; most of the state repression had been doled out by the Montreal police and other local police forces. The intervention by the SQ is significant. In the meantime, in the same building as the convention, student leaders negotiated with the government for close to 24 hours after receiving a surprise invite.

Outside, many students were shot in the head with baton rounds — plastic rounds the size of a fist — and two were left in critical conditions and comas. The provincial riot police, in one case, refused to bring an ambulance in that was only metres away from a student bleeding and in serious need of attention; they insisted that students should call one themselves.

Inside, the government offered to delay the increase until December 2012, and using the promise of a future committee as a smokescreen. The committee, which would have the students as a minority, would work to find savings in university administration, which would theoretically go to reducing ancillary and administrative fees. These are fees charged over and above tuition at each institution. The tuition increase stands at $1,778, but the average paid in ancillary fees by students is only $700, which still leaves students facing nearly $1,100 in tuition increases. Of course, there was also no guarantee against the possibility that the committee or the minister simply would decide that there is no waste to cut.

The statements by Line Beauchamp and Quebec premier Jean Charest the next day only confirmed that the offer was a trick; they triumphantly declared the tuition increase had passed. But many on the students’ side still worried this would be enough to confuse and convince a certain section to abandon the strike, and that we had arrived at the moment of the unravelling of the movement.

All the doubt was proven wrong.

The students mobilize and reject the offer

On Monday morning, the 7th of May, the first student general assemblies were held to discuss the offer. The first result was in — DÉSS en Arts, création, et technologies at Université de Montréal (UdeM) rejected the offer by 83%, and 75% voted to extend its strike, with a total participation rate of 86%. The result sent an electric shock of confidence through social media. More results began to pour in; at the Sociologie Université de Laval, 94% rejected the offer 94% and a further 87% agreed to extending the strike. At CEGEP Valleyfield, the offer was also rejected 61% voted to extending the strike, a stronger margin than the last strike mandate. CEGEP Saint-Laurent and CEGEP Marie-Victorin remained on strike and refused to consider the offer as it did not address the tuition increase, and therefore did not meet their strike mandates.

Over the next days, what was thought to be a denouement for the movement turned into a tide of rejection. Considering that the semester is close to being cancelled, even the leaders of the student unions were surprised by the groundswell. The students were willing to risk the semester to get a decent deal.

Line Beauchamp makes one last attempt before exiting the stage

After such a massive defeat, the minister held telephone exchanges with student leaders over the weekend. She went so far as to offer a parliamentary committee, but had to admit that the student leaders had no “faith in the elected representatives”, which should come as no surprise. Students had spoken clearly: no committees, and any deal must be deal directly on the core matter — tuition fees.

On May 14, Beauchamp resigned. This must be seen as a second victory, coming close on the heels of the mass rejection of the government trick. The movement has removed a minister who has remained intransigent from the beginning. A minister who, it emerged during the past month, had had an intimate breakfast with several high-ranking mafiosi to fund her campaign, but had refused to sit down with representatives of CLASSE (the student union representing half of those on strike) who she claimed were “violent” and “radical”. This was a big blow to the Jean Charest government, who clearly saw that it would be interpreted as a sign of weakness. Their razor-thin majority in the National Assembly will add to the instability in Quebec society. This is now a government in crisis.

We witnessed the government’s response the following day, Tuesday 15th May. Charest put the SQ provincial police on full mobilization, intervening directly on the campuses to break picket lines and force through the injunctions. The government is faithfully applying the mafia principle of “blood for blood”, and, “You killed one of ours, now we’ll kill one of yours”. CEGEP Lionel-Groulx saw arrests on the picket line, tear gas on the campus, and forceful removal of the striking students. Other schools have seen the same. A contingent of students, travelling on a bus from Université du Québec à Montréal (UQAM) to support their brothers and sisters at Lionel-Groulx, were stopped and arrested en masse for disturbing the peace, finally released on condition they return to Montreal.

With the flood of injunctions ordering the end of picket lines, financed by rich parents on behalf of spoiled strike-breakers and personally fast-tracked by the Liberal-appointed chief of the Quebec Supreme Court, the strike is now effectively illegal. And the presence of teachers and parents on the picket line did not shame the police into backing down from using force to enforce that order.

Charest would do well to learn from Mubarak

The government’s heavy-handed attack brings to mind Mubarak’s night of the camels. The government is looking to beat the movement into submission, but storming into the picket lines with SQ horses can only increase the movement’s will to fight.

The Liberal Party caucus has reportedly been given 48-hours by their premier to make a choice: 1) a special law to force the students back to class, under threat of fines or perhaps even jail time; 2) a referendum on the tuition hike; or 3) early elections.

Should the law come to pass, it will remain a dead-letter, just as the injunctions rewarded by the corrupt head of the Supreme Court have. At CEGEP Lionel-Groulx, despite the breaking of the picket line, the teachers have refused to teach while inhaling tear gas.

Today, the new minister of education is to meet with students at 6 PM. We will see what comes of it. But should a special law be passed, the students will need to call out the teachers’ unions and workers’ unions to break it.

François Legault, leader of the right-wing Coalition Avenir Québec (CAQ), is demanding the government to force the students back to class. He is asking, “What will be the next group to protest in Quebec and force the government to back down?” If the students’ right to strike is smashed, we must ask, will the workers’ unions be forced to accept austerity with these methods, too?

No matter the result, these past 92 days of strike will go down in Quebec and Canadian history. For the 100th day of the movement, the students are planning a mass mobilization. Every union must mobilize for May 22nd. Defend the youth! For a 24-hour general strike on May 22nd! The student unions must go to the workers’ workplaces and ask for emergency assemblies to protect the students, and to defend this movement against capitalist austerity that impacts us all.