Quebec: More than 80 people discuss the fight against the new CAQ government 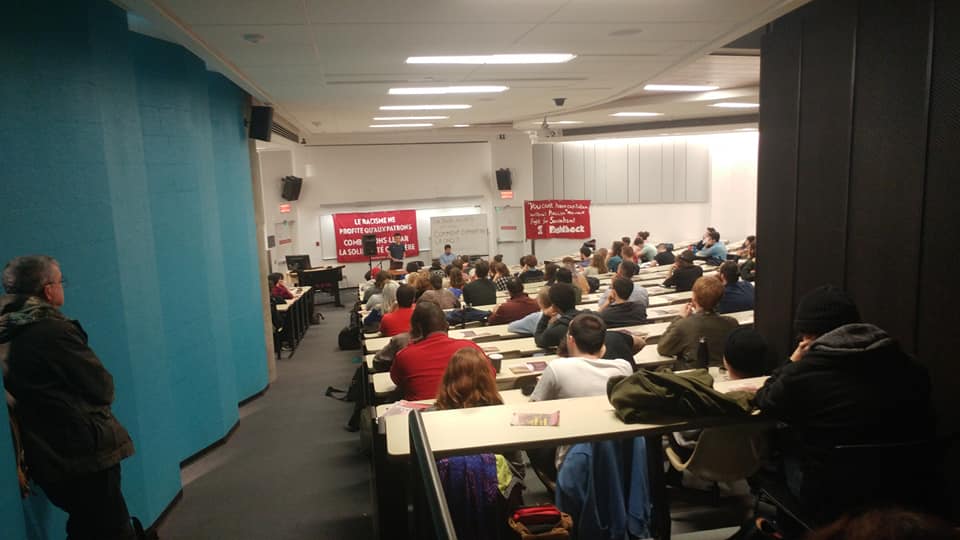 On October 10, a conference organized by the comrades of La Riposte Socialiste on the subject of “How to fight the CAQ” was held at the Université du Québec à Montréal. More than 80 students and workers participated in the conference.

It is not surprising that this conference attracted many people. Many workers and youth are shocked by the victory of the CAQ and are actively seeking a way to oppose the racist measures, austerity, and privatization that this government is preparing.

The presentation was given by Julien Arseneau of the La Riposte socialiste editorial board. In his presentation, he went over the context in which the CAQ scored a victory on October 1st. He explained that the electorate has punished the Parti Québécois and the Liberal Party for decades of austerity, cuts and corruption. He insisted in particular that the election reflected a growing polarization, to the right and to the left. This is a polarization that has not only affected Quebec, but is an international phenomenon. Workers and young people all over the world are rejecting the old establishment parties that have taken turns holding power for decades, and are now opting for parties and politicians they perceive as breaking with the status quo.

Julien also pointed out that the CAQ is already an unpopular government: nearly two out of three voters did not vote for the CAQ, not to mention the large number of people who simply did not vote.There is huge potential in Quebec for a mass movement against the attacks that will come from the CAQ.

The CAQ did not wait even two days to declare in the media that it will prohibit all public sector employees in a position of authority, including teachers, from wearing religious symbols, and that those who do not want to comply will be fired or relocated. The purpose of this measure is not to “protect” the secularism of the state, but to divide and divert the attention of the workers by scapegoating Muslim women.

Julien also argued that the fight against the CAQ cannot be conducted solely within the limits of the National Assembly. It must be done in every workplace, in every school, and in the streets. We must use the methods of the class struggle: demonstrations, occupations, strikes, and civil disobedience against the anti-democratic legislation that will come. Unions have the responsibility to mobilize their members to lead this struggle. Julien also explained that the movement must ultimately have the perspective of overthrowing the CAQ government. He gave the example of the 2012 student strike, which led to the end of the Jean Charest regime. He pointed to the upsurge of the class struggle in Quebec since the beginning of this year as an indication that, after suffering through years of austerity, the workers are willing and ready to fight the government and bosses.

You can listen to the presentation here:

The presentation was followed by an in-depth discussion. Many interventions focused on the role of socialists in the movements that will come. Others asked questions about the fight against racism, as well as the legitimacy of Quebeckers’ sentiments towards secularism. One of our union comrades intervened on the need to have combative unions, and called on the participants to join Labour Fightback.

Julien concluded the discussion by focusing on the role of socialists in the labour movement and what can be done, not only to fight against the CAQ, against racism and against austerity, but also to fight for a new society, a socialist society. He explained that socialists have no choice but to intervene in the movement as it exists. That the role that La Riposte Socialiste hopes to play is to be present in the struggles of the workers, in the trade unions, and in the left, to defend a Marxist perspective, and to convince a majority of the merits of our perspective. There is no magic formula: you have to be where workers and young people are, and you have to work hard to have your ideas and program heard by them.

He ended by asking those present to join La Riposte Socialiste in the fight not only against the CAQ, but in the struggle for a better world, for a socialist society.

If you too are interested in defending a socialist perspective in the movement against the CAQ, contact us without delay!