February 18th is the date set for the General Elections in Pakistan. It is also the date when politics in Pakistan will enter a new epoch, the epoch when masses will come out to challenge the class that has oppressed and tyrannized them for generations.

The campaign of the largest party of Pakistan, the party that is supported by the downtrodden and exploited working class, the Pakistan People’s Party, is in full swing and is reaching new heights never seen before. 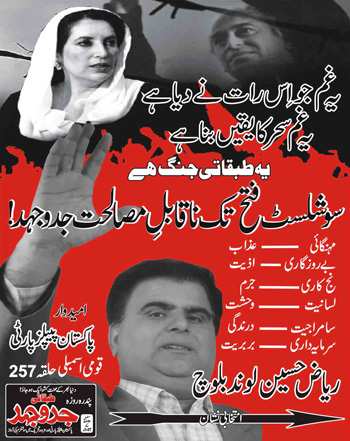 The assassination of Benazir Bhutto on 27th December 2007 and the events that followed have sparked a new wave of revolutionary enthusiasm and awakening of the masses. The public meetings of the PPP are attracting the masses in their hundreds of thousands. Every street and road echoes with the slogan of Jiye Bhutto! (Long Live Bhutto!). The tricolour flag of the PPP adorns most of the streets and roads throughout the whole country. The revolutionary election campaign of the Marxists is also having an impact and posing a challenge to the capitalist class.

The situation in the constituency of NA-257 Karachi

In Karachi the establishment is supporting the reactionary MQM and serious preparations are clearly being made to rig the election result. However, on the other side the masses are filled with anger and hatred against the rulers who have killed the person they perceive as their leader.

In NA-257 comrade Riaz Hussain Lund Baloch is standing against the MQM. He has led a campaign centred on socialist slogans, which are getting a big response from the public. Big public meetings and rallies raise the morale, enthusiasm and spirit of the workers every day. All the main thoroughfares and junctions in the constituency are adorned with posters with revolutionary slogans. Comrade Lund’s latest poster says, "Irreconcilable struggle until socialist victory".

Comrades have come from other parts of Pakistan to participate in the campaign in Karachi. Comrades from Balochistan are addressing the Baloch workers in their own language, those from Pukhtunhua are doing work among the Pushtoon speakers, those from Sindh among the Sindhis, and so on. The door-to-door campaign is also having a big impact. Wherever the comrades enter the streets or markets in the constituency, hundreds of people gather around them and listen to their revolutionary speeches with great interest.

A leaflet with a program for socialist revolution is being distributed in thousands of copies, which is getting big response. Wherever comrades distribute the leaflet people gather in big numbers and snatch the leaflets from them making it difficult for comrades even to save their own copies! Revolutionary slogans being raised in every rally. Self-organised rallies appear at different points, called by young people, almost on a daily basis in the constituency. 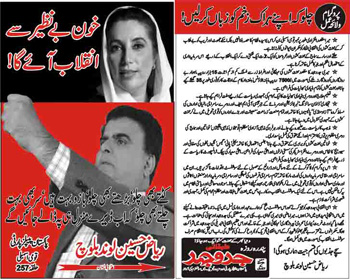 All this upsurge and enthusiasm among the masses who see voting for the PPP as a way of taking revenge for Bhutto’ assassination, has disturbed the establishment and the ruling classes who now fear a sweeping majority for the PPP candidates. Therefore, special measures are being taken to ensure rigging for the MQM. Workers are being harassed and are targeted for supporting the PPP. On Wednesday night (February 13) for instance four workers of the PPP were injured and one was killed in the adjacent constituency of PS-119, when some Fascists opened fire on a street corner meeting of the PPP.

However, the Marxists have responded by mobilising the proletariat of Karachi against intimidation. We have organised a rally in one of the main areas controlled by the MQM in which over 2,000 workers participated. This shows the reactionaries that the bullets and bombs of fascists and terrorists will not intimidate the working class. The final showdown will take place on polling day when the fascist elements with the full support of the judiciary, police and paramilitary forces will come out in an attempt to stop the rising tide of the masses who will come out to vote for the PPP. On this day we will see the clash of classes, workers against their masters.

Dawar Khan Kundi is the candidate of the PPP here who has got huge support of the masses against the government backed Mullahs. The assassination of Benazir Bhutto has given him a sweeping lead in the constituency. His public meetings and rallies show the real strength of the masses behind him.

However, the Mullahs are preparing to massively rig in this constituency. Fake Identity Cards have been prepared in big numbers along with other measures for rigging on a large scale. A candidate from the Kundi family, Habib ur Rehman Kundi, has been used as a ploy to sow confusion and divide the votes of Comrade Dawar Khan Kundi. The Mullahs are spending millions on the campaign of this candidate who is also a former minister and attempts are being made to force the voters to sell their vote. In fact big amounts are being spent to bribe the voters. It is also possible that the Mullahs may attack the PPP workers on polling day and might even injure or kill some of them. In spite of all this, the masses and workers of the PPP are determined to defeat the reactionary mullahs by a big margin.

Comrade Ali Wazir is the Marxist candidate here who is contesting against the candidates of Baitullah Mehsud, the new leader of the Taliban. The comrade’s revolutionary campaign, both against fundamentalism and imperialism, has given him wide support in the constituency, especially among the youth, who are attracted towards him in large numbers. In this tribal society a new contradiction between the young and the old has developed: the youth are refusing to obey the elders.

This area, which is a stronghold of the Taliban, has seen a new light of revolutionary socialism, which is spreading like wildfire. This has challenged the authority of the Taliban. As a result, these rabid reactionaries have organised murder squads to kill Comrade Ali Wazir. But these threats are not enough to halt this revolutionary campaign and the comrade is still leading it, although he has now been compelled to conduct his campaign in clandestine conditions.

This is the constituency of Comrade Manzoor who has become a renowned name in the labour movement of Pakistan and the whole world. The Marxist MNA has earned enormous supports among the workers as a result of his revolutionary work both inside and outside the National Assembly. This is shown in the enthusiastic response to his election campaign. As one enters Kasur one comes across giant billboards of comrade Manzoor with slogans of the workers. He is tipped to win his seat by a heavy margin and his billionaire opponents will be rejected by the masses. People are turning out in thousands to the public meetings of comrade Manzoor. Four or five large public meetings are held every day across the constituency, where the comrade’s revolutionary speeches raise the enthusiasm of the masses to new heights. 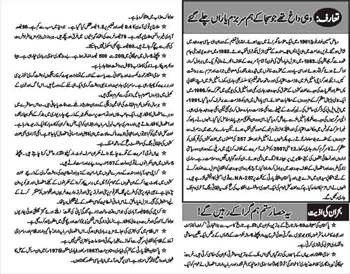 All these campaigns and those of other candidates of the PPP have upset the plans of the government and the Election Commission who wanted to get the results of their choice. The hurricane of public support has sabotaged the plans to rig the elections on the part of the government. However, the military and civilian establishment will use all the resources at their disposal to curb this tide of opposition. Every effort will be made to rescue the drowning ship of Pakistani capitalism.

On February 18th the world will witness the clash of two forces. One will be the masses coming out in an attempt to change their destiny and the other will be the dark forces manipulated by a small minority of reactionary Mullahs, fascist elements and capitalists who will try to impose their will on the majority by attempting to rig the elections.

The masses must be vigilant. They will be vigilant. But if the establishment attempts fraud it will provoke an almighty backlash from the masses. No one would believe the result. The masses desire change and the only way they have of expressing this desire is by voting for the PPP. Within this context the Marxists are working to provide the masses with a revolutionary socialist programme, as the only real final solution to their problems. A new revolutionary period is opening in Pakistani politics.