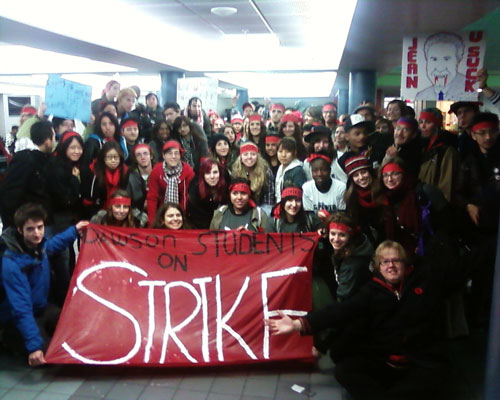 Over 200,000 Quebec students went on strike on Thursday (10th November) against the tuition increases being imposed on them by the Quebec Liberal government. Premier Jean Charest’s proposes to increase post-secondary tuition fees by a total of $1,625 over the next five years, the biggest tuition increase in the province’s history.  Combined with a previous $500 increase by the Liberal government, this amounts to a 125% increase in the amount that Quebec students must pay for post-secondary education.  The indignation that has swept throughout society against this is astounding and clearly manifested itself throughout the strike.

In the days and weeks prior to Thursday’s strike, students across Quebec gathered at their respective campuses and, using the democratic traditions of the movement, held general assemblies to decide whether they would go out on strike.  Most campuses across Quebec, regardless of whether they were anglophone or francophone, voted in favour of strike action — often with near unanimity.  Opposition to striking was largely relegated to tiny handfuls of right-wingers in each general assembly, who were completely isolated from the rest of the student population.  The general militant attitude of the students was clearly on display.  In some cases, the main student union of a school failed to organize strike votes but this task would then be taken over by individual faculty unions.  Given the attacks on the accessibility of education for working-class youth, students have been yearning for a solid lead and a concrete way of opposing the government’s draconian assault.

The severity of the government’s attacks have helped to break down many of the divisions that plagued the student movement in the past, and which contributed to the failure of the last student strike in 2007.  Even campuses that are normally seen to be dormant of student activism voted massively in favour of the strike this time around.  99% of students voted in favour of strike action at Vanier College; the same result could be found at Dawson College.  Arts and science students at Concordia University (who make up 40% of the student population) voted almost unanimously for strike action, too.  Only a handful of naysayers, out of hundreds present, voted against the strike at McGill University.  Even 3/4ths of business and administration students voted in favour of strike action.  At the Université du Québec à Montréal (UQAM), the traditional radical centre of the Quebec student movement, the students voted unanimously for a strike for the first time in decades.  Faculty unions at the normally passive University of Montreal voted to strike, as well.

Campuses all over the province, and particularly in Montreal, were shut down.  Students began picketing bright and early at 7am, bringing everything to a halt.  At Dawson College, students continued the striking tradition initiated by the Marxists during the 2007 strike, and occupied the administration office.  This forced the administration to guarantee the students that no one would be punished for missing classes that day. The Dawson Teachers Union declared their support for the students and refused to cross the picket line; instead, they provided CSN (Confédération des syndicats nationaux) rain gear and food to the picketing students. The steadfast determination of the students and the support of the teachers shut down the entire school for the day. This should be viewed as a concrete lesson for the movement as a whole. With the workers on side, the government and the administration had no way of running the school. Ultimately, if we are going to succeed in defeating the tuition increases, the student movement will need to garner greater support and further consider itself a part of the wider labour movement, struggling against not just narrow student-based questions but the entire austerity agenda being delivered by the capitalist parties. 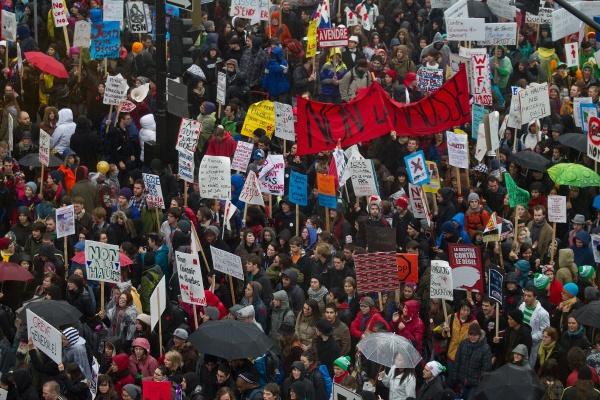 At 2pm, students from around the province all converged at Place Émilie-Gamelin in Montreal. Buses from dozens of cities brought students together, to give them a sense of their full force.  At its height, well over 30,000 were demonstrating.  Support for the students also extended deep within society with all of the main union federations coming out publicly in favour of the students’ struggle.  This was in addition to the long list of over 130 community organizations that also came out in support of the student strike. The huge demonstration blocked traffic well off into the distance as students marched towards Jean Charest’s office near McGill University.

It is not a coincidence that this movement has reached so many students at the same time as the rest of the world is reacting against capitalist austerity.  Mass movements and revolutions have spread across the globe with millions rising up against the injustices of the system. The mood of the students is one of extreme optimism, and how could it be otherwise?  Everywhere we look, we see our brothers and sisters in many different countries rising up for the same reasons. The feeling is that this strike is just the start; students are prepared to move into next semester more experienced and even more ready to fight. It must be remembered that the last successful student strike was in 2005 and at the height of that movement, we saw 244,000 students on strike. However, the 2005 strike only reached its pinnacle five weeks into the strike, and initially only involved a few unions.  This time around, the movement has already started with 210,000 students. The few school unions and faculty unions that failed to hold strike votes will not make the same mistake next time around. The unity of the student movement, with schools going out in common protest regardless of whether they are a part of ASSÉ, FEUQ/FECQ, or the CFS, has shown its great benefit. If we can preserve this unity and move towards more united action for next semester, we can make defeating this government’s attacks a concrete reality.