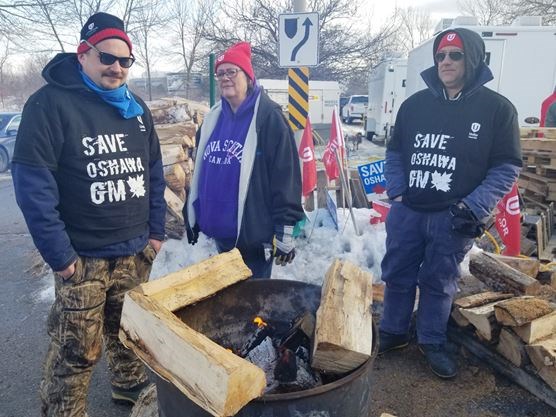 In November of last year GM announced that they were closing their plant in Oshawa. Approximately 2,500 workers will be directly affected by this, while workers from parts and feeder plants also stand to lose their jobs. In total, the closure is going to lead to an estimated 20,000-30,000 people unemployed in Durham Region. Oshawa and Durham Region are already facing tragic rates of poverty, homelessness and unemployment. If GM closes its doors our community is going to be in ruins.

Workers at GM are beginning to grow more and more defiant and are raising a fight to keep their jobs and save GM Oshawa. Occupying the GM plant and placing it under workers’ control and nationalization is the only way to achieve this. Workers need to use every means at their disposal to win the fight to keep GM in Oshawa. Large scale actions in Oshawa such as sit down strikes, blockades and even an Oshawa wide general strike are needed to keep the jobs in the city.

Workers have begun sit down actions in the plant, which is a step in the right direction, towards occupation. They have also begun blockading the entrances and exits so trucks cannot deliver or pick up cars and parts. Hitting GM where it hurts, their profit, is the only way to make a difference. GM CEOs care about money, not the workers, and certainly not the city of Oshawa.

Fightback stands in solidarity with Oshawa GM workers and we are encouraging workers to keep fighting against these austerity measures. Tact and diplomacy do not work when going against a heartless corporation. Workers’ control and nationalization of the entire auto industry will be what saves Oshawa.

Fightback Oshawa interviewed a GM worker, Mike Mutimer, who was present at the sit down strikes that recently took place.

Fightback: What are the key issues of the sitdown strikes and plant occupation that recently took place?

Mike: Most of the reason we sat down was, number one: to listen to what Jerry [Dias] had to say after the meeting [with GM]. We were all quite interested to hear, because [the meeting] was supposed to happen the day before, so them saying the day after gave us hope that they were formalizing a plan to put in motion that we would stay open. So we sat down to listen, and we continued to sit down afterwards when the decision was firm that they were going to close Oshawa.

FB: What are you hoping the outcome of the sit down strikes will be?

Mike: Well the idea of the sit down strike was to give notice that we were frustrated, we’re angry. They made a decision to pretty much end our livelihood, our means of living, so instead we decided to sit down to put an end to their production for the day, to say, “You’re not getting any money either. If you’re not giving us any money through our work, then we’re not going to provide you any through our work.”

FB: Is this a step towards workers’ control of GM and other companies in the auto-sector?

Mike: The sit down strike, I think it’s the beginning. It’s difficult now we’ve got our workers spread out all throughout the plant, and we’re in two different buildings, so communication can be tough at times. But these types of solidarity actions, where we sit down together, these are opportunities where we can begin to formulate ideas and start to reach out to other places, to start to move towards that shift to worker-based democracy, where we’re the ones making the plans rather than the leadership at the top telling us what to do.

FB: In Europe and increasingly in North America we are seeing the capitalist system in crisis, and the ruling class is placing the consequences of this on the shoulders of the working class through austerity measures and cuts to jobs. As a result, many workers and youth are looking to socialism as an alternative to austerity and capitalism. Do you think socialism is a relevant idea for the auto industry and other workers who are fighting back against cuts and precarious employment?

Mike: Yeah. The idea has been floated that instead of working for a corporation, perhaps you know… If you look at Justin Trudeau and what the Liberal government did a few month ago and nationalized a pipeline. So why not nationalize a car company? We’ve been working there for years, we’ve got the knowledge, we got the technology, we know what to do, so why not instead of making money for a corporation we start making money and socializing that money and making strides that way? It would be a good way to go.

Mike: Well it was definitely a mood of defiance. We were given numerous orders to go back to work, and finally a direct order. If you disobey a direct order you’re automatically disciplined: it’s usually a day out the door, if you’re already on the discipline system it’s going to be increased, so people are putting a lot on the line there. To circumvent that we pretty much told the company that we didn’t feel well. There was a mood of anger, anxiety, a lot of depression when you find out you’re going to lose your job. At the end of the day the chairperson came down from Windsor after the decision was made and he told us that we weren’t going to be facing discipline. We weren’t going to catch shit for sitting down. To hear in the middle of your shift that you’re going to lose your job at the end of the year, no matter what we put forward—well we’re not going to work today and you’re not going to give us shit for it.

FB: Will there be any future actions or large rallies in Oshawa? While the rally in Windsor was well attended it doesn’t put the same pressure on GM as the sit down strikes and other large scale actions such as an Oshawa-wide general strike, or all workers affected by GM occupying their plants as well.

Mike: The rally in Windsor was an interesting one because there’s no active GM plant in Windsor. At the end of the day if you take a look at it, it’s more of a photo op to be in front of the Renaissance Centre, the GM headquarters. […] This was more a show of solidarity and I think it made a lot of workers understand that if we can get a crowd this size in Windsor we can get more in Oshawa where it does count, where we do have the plant, and there’s something we can do. So I definitely think that you’re going to see something happen in Oshawa soon. In fact, last night there was a brief press release on the Unifor website that said there was going to be a ramp up of this campaign, but it was removed quickly. So I do feel the union has something planned.

FB: Is there anything else that you would like to add?

Mike: David Patterson, the vice president of GM in Canada, claims that there’s jobs to be had for the workers. But there’s 13,000 people currently unemployed in Oshawa (population 160,000) so for him to say that there’s thousands of jobs at this place, or there’s 200 jobs in Mississauga. But if you look at the jobs in Mississauga, there are people unemployed there too, so you can’t say we should take jobs from someone else. So to say there’s jobs to rebound on, that’s just not true, and it’s not fair to people who are already out there looking for jobs. It’s not fair to the workers.