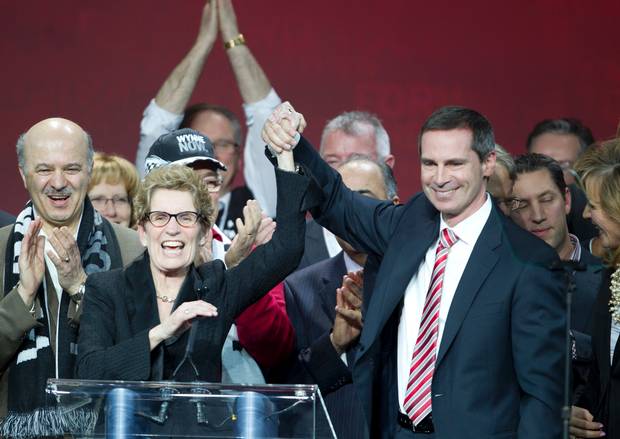 The Ontario Liberals are trying their best to put forward a new face after Kathleen Wynne took over the premier’s office from Dalton McGuinty.  The recent speech from the Throne attempted to present the Liberal government in a softer light, in the hopes that the labour movement would forget the Liberals’ bullying of workers and single-minded drive to impose austerity.  However, labour and the NDP cannot have any illusions that Wynne’s Liberals will be any different than those under McGuinty.  As the famous song goes: “Meet the new boss, same as the old boss.”

In the Throne speech, Wynne and the Liberals identified the need to “improve relations with labour”, as well as to ensure opportunities for all “without letting anyone slip through the cracks”.  The speech lamented how the McGuinty Liberals had felt compelled to ram through imposed contracts and legislation like Bill 115, which took away teachers’ democratic rights.  In the future, Wynne’s government would make sure to “consult” with other groups, including unions, to ensure that the Ontario government creates “a fair society”, where “every Ontarian must have the same firm footing.”

These may be nice words, but words are cheap.

All signs point to the likely outcome that Wynne’s government will be just as focused as her predecessor’s in making sure that the working class pays for Bay Street’s crisis.  As the Globe and Mail labelled it, Ontarians should expect “McGuintyism without the Dalton.”

Alongside the platitudes offered by Wynne, the Throne speech maintained the Liberals’ promise of eliminating the province’s massive $12-billion deficit by 2018.  And, subsequently, if the Liberals were still in power, they would limit government spending increases to one percentage point below GDP growth, at least until the debt-to-GDP ratio was reduced to 27%.  Furthermore, a key member of Wynne’s transition team is Don Drummond, the same Don Drummond who authored last year’s Drummond Report that recommends permanent austerity in order to return Ontario’s financial books to order.

Youth should not expect any help to arrive from Kathleen Wynne’s government, either. According to a Toronto Star report, post-secondary tuition is expected to continue rising  despite the fact that undergraduate education now costs an average of $7,180 per year — far and away the highest in Canada.  Moreover, the provincial government has demanded that Ontario’s colleges and universities cut $40-million in spending from their budgets this year, and an additional $80-million next year.

And, despite her insistence that the provincial government would seek to restore good relations with the labour movement, there was no mention in Wynne’s speech about lifting the wage freeze on Ontario’s public sector workers.

If Ontario workers and youth are going to see any positive changes from their current existence, they cannot place any faith in the Liberals, Bay Street’s voice at Queen’s Park.  The corporate media has made much fuss about the fact that Kathleen Wynne is Ontario’s first female premier and the first openly gay premier in Canadian history.  However, none of these facts change the reality that the bankers and bosses expect the financial crisis to be cleaned up and that it will be workers and youth who will have to shoulder the costs.

We only need to look at the mood amongst the province’s teachers to see the lengths that workers are prepared to go in confronting the austerity and attacks coming from the government.  Over 130,000 elementary and secondary school teachers were prepared to defy Bill 115 and go out on a wildcat strike in mid-January until their leaders reigned the movement in.  At the end of January, as many as 30,000 trade unionists and their supporters protested in front of the Liberal leadership convention in Toronto — the largest demonstration in Ontario since the Metro Days of Action back in the 1990s.  Workers are prepared to fight, if necessary, to stop capitalist austerity.

Now, their leaders and their organizations must be prepared to do the same.

It is not surprising that many labour leaders are dreading the prospects of a Conservative government under Tim Hudak.  Over the past few months, Hudak has been busy courting Bay Street with his vision of an all-out attack on the labour movement and social services in Ontario.  However, the Liberals, even under Kathleen Wynne, are no better.  It would be a colossal mistake by the leadership of the labour movement to give any support to the Wynne Liberals, or to sow any illusions amongst their members that Wynne will be any different than her predecessors.

Unfortunately, the words coming out of some of the labour leaders’ mouths after the Throne speech are not very encouraging.  Immediately following the speech, Ontario Federation of Labour (OFL) president Sid Ryan said, “The message today was pretty good.  It struck the right tone.”  In an interview with TVOntario’s Steve Paiken, Ryan mentioned that he would urge the Ontario NDP to “give [the Wynne government] a chance” before prematurely pulling the plug and putting the Tories into office.  Ken Coran, the president of the Ontario Secondary School Teachers Federation (OSSTF) went a step further by calling on his members to return to overseeing extra-curricular activities.  We think that this is very short-sighted on Coran’s part and only serves to demoralize rank-and-file teachers who were doing their utmost in fighting the Liberals’ draconian legislation.

For her part, Ontario NDP leader Andrea Horwath said that the throne speech wasn’t so bad that the Liberal government should be brought down for it, but that the upcoming provincial budget would have to have far less vague platitudes if it had any chance of passing through Queen’s Park.

Already, the Liberals have made it clear that their overriding concern at this point is to eliminate the province’s deficit and to cut government spending.  Given the fact that even the most optimistic of Canada’s bankers and economists believe that the best we will see is anemic economic growth for the foreseeable future, this means further attacks and austerity on the working class and youth.  Thus, the NDP can have no part in passing the Liberals’ austerity budget.

Last year, the NDP’s parliamentary caucus shamefully allowed McGuinty’s austerity budget to pass.  The Liberals subsequently froze public sector wages, attacked the province’s doctors, imposed an austerity contract on school teachers, took the right to strike away from those same teachers, and even suspended Queen’s Park to avoid having the government brought down.

More than ever, the NDP need to provide leadership to Ontario’s workers in their fight back against austerity.  Horwath and the NDP leadership may state that Ontarians don’t want another provincial election so soon after the last one; that may be true, but a bigger danger is the NDP being complicit in the Liberals’ attacks on workers.

A fighting spirit is clearly present in the labour movement.  What we need now is a fighting spirit within the workers’ leadership — a leadership that is prepared to mobilize Ontario’s workers and youth, that can harness that anger and eagerness to fight, and that can turn it into a movement that aims to build a better society.  The first step must be to not give the Liberals a single inch of wiggle room for them to further attack the working class.  As the old adage goes, “We won’t get fooled again.”