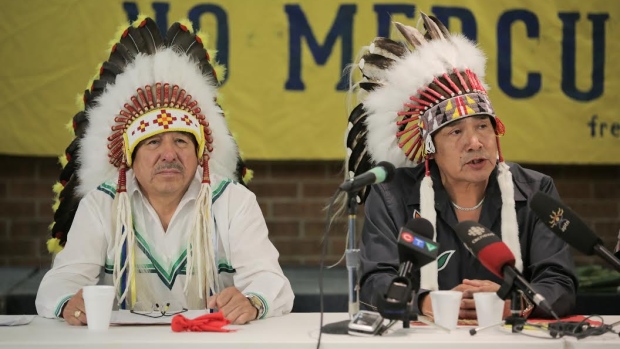 For decades, the residents of Grassy Narrows First Nation, a small community near the Manitoba border, have suffered from the effects of mercury in local lakes and rivers, eating poisoned fish and falling prey to illness from unsafe drinking water. On Sept. 20, Japanese researchers released findings showing that more than 90 per cent of residents in Grassy Narrows and Wabaseemoong First Nation displayed signs of mercury poisoning, with the majority experiencing sensory deprivation through the loss of feeling in their fingers and toes. The lack of clean drinking water in First Nations communities across Canada exacerbates an already dismal situation produced by capitalism of poverty, a lack of jobs and any real infrastructure. The Ontario government’s shameful inaction to the ongoing crisis in Grassy Narrows is a testament to the low priority of human needs such as the health of Indigenous people in a state run on behalf of the capitalist class.

The mercury poisoning of Grassy Narrows—also known as Asubpeeschoseewagong First Nation—dates back to the 1960s, when the pulp and paper mill in Dryden, Ontario, owned by the Dryden Chemical Company dumped 9,000 kg of mercury into the Wabigoon and English River systems. In order to absolve themselves of any responsibility for their actions, the federal government and Reed Paper Company (which had bought out the Dryden Chemical Company) ended up paying a settlement to Grassy Narrows, but the mercury was never removed from the water. As a result, multiple generations of Grassy Narrows residents have experienced serious health problems.

As reported by the CBC, symptoms such as loss of motor function, tingling and weakness in limbs, and difficulty speaking and swallowing are not uncommon among the residents of Grassy Narrows. Many parents believe physical abnormalities, developmental delays, and even terminal illnesses in children are directly related to the water contamination. Turbidity levels of the local drinking water are at 120 times the Ontario guidelines, while cancer-causing disinfectant by-products that may not be removed by boiling are present. Despite the contamination, fish remains a staple for residents who are often unable to afford other food.

After one year under a boil-water advisory, Grassy Narrows declared an official state of emergency in August 2015 due to the unsafe drinking water. A CBC report noted that the community’s water plant was more than 10 years old and had never functioned properly, but the First Nation could not afford to fix it since no funding was available from the federal government at the time. Meanwhile, mercury levels in sediment in Clay Lake and parts of the Wabigoon River continue to rise.

On June 2, 2016, teenagers from Grassy Narrows were ejected from the Ontario legislature after journeying 1,700 km to demand that the government take action to address the lack of clean drinking water in their community. The teens were removed for wearing T-shirts reading “Water is sacred”, deemed to constitute a protest which is not allowed in the chamber.

Despite the immensity of the crisis, the provincial government has been stalling on whether or not to take action to address the situation. As reported by the Canadian Press, even in the face of a report concluding that it was possible to safely clean up the mercury, “the government is reluctant to take action without more study on what exactly should be done. Premier Kathleen Wynne told the legislature the government wants to make sure any remediation efforts won’t stir up more mercury in sediment and make the situation even worse.”

This logic flies in the face of already existing studies. A report commissioned by Grassy Narrows First Nation to investigate the mercury contamination found that cleaning up the community’s water supply is already feasible. Former government scientist John Rudd, lead author of the report, described official inaction as “frustrating,” while noting, “We made these recommendations in the 1980s and our report was put on the shelf.” As suggested by Rudd, governments ignoring First Nations and stalling in the face of massive problems facing these communities is nothing new.

Rudd has estimated that a cleanup could cost “several tens of millions of dollars” while likely saving lives. But the Ontario government, having reviewed the report, defiantly rejects its conclusions. Gary Wheeler, a spokesperson for the provincial Ministry of Environment and Climate Change, responded to the report in an email to CBC News, “Currently there is no evidence to suggest that mercury levels in the river system are such that any remediation, beyond continuing natural recovery is warranted or advisable.” Yet Rudd countered that natural recovery slowed three decades ago and that current mercury levels in the water are five to 10 times higher than normal.

Wheeler’s response puts into sharp relief the cold calculations of the Wynne government. For the bourgeois politicians at Queen’s Park, the health of Indigenous people in poor and isolated northern communities is simply not a concern. Under the framework of capitalism, there is no profit in spending tens of millions addressing the crisis, and thus no impetus for the representatives of capital at the provincial level to take any action. 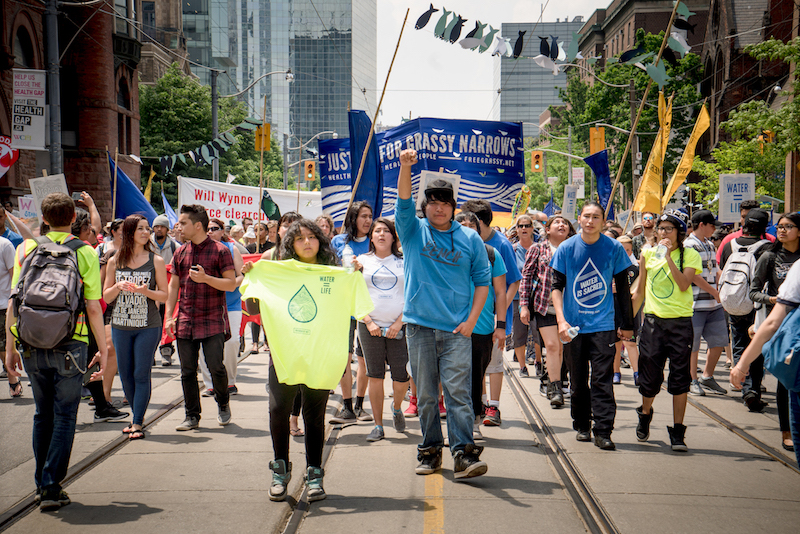 The political calculations are somewhat different in Ottawa. After years of inaction by Stephen Harper’s Conservatives, the federal Liberal government under Justin Trudeau has felt obliged to take action by investing in addressing the water crisis that affects First Nations communities. Trudeau’s first budget pledged almost $2 billion for water and wastewater infrastructure over the course of five years, including $1.8 billion for water facility operation and maintenance and $141.7 million for monitoring and testing of drinking water, with the aim of ending boil-water advisories during the allotted period.

The federal government’s response underscores the severity of the water crisis, which extends far beyond Grassy Narrows. As of January 2016, drinking water advisories were in effect in 85 First Nations communities across Canada, with the majority in Ontario. Approximately 36 per cent of the advisories had been in place for more than 10 years, and in some cases more than 20. A June report by Human Rights Watch concluded that the Canadian government “has violated a range of international human rights obligations toward First Nations persons and communities by failing to remedy the severe water crisis.” A Toronto Star editorial, the bellwether of elite liberal opinion in Canada, quoted the report and called for action from the federal government, stating that “Ottawa should be ashamed.”

However, it is one thing to call for a response to the water crisis to maintain a positive international image for Canada, and quite another to solve the problem. It remains to be seen what effect the federal government’s investment will have, but it would not be the first such attempt. A study for the Canadian Water Resources Journal of First Nations water-management strategies noted that $2 billion had been invested between 2001 and 2013 with little to show for it.

Speaking to Maclean’s, Lalita Bharadwai, a toxicologist and associate professor of human health who co-authored the study, argued that the lack of progress highlighted the weaknesses of a top-down approach and the need for individual consultations with First Nations communities. “The issues around water are not the same for each community,” she said. “As a result, money being spent, for example, to increase training or education about how to operate a water system may work for some communities but not others. Another example [is] geographic location and remoteness: Putting money toward a treatment plant may work for one community, but not another, where it may break all the time because of permafrost.”

As outlined in the May report commissioned by Grassy Narrows First Nation, mercury in the water around Grassy Narrows can be cleaned up right now. The problem is a lack of political will. As an instrument of class society, the state serves the interests of the ruling class, which in capitalism consists of the bourgeoisie. Ontario’s capitalists are not sufficiently moved by decades of suffering in communities such as Grassy Narrows to compel the politicians they own at Queen’s Park to clean the mercury out of the water immediately. Their lack of action is a damning indictment of a system in which vital public needs tend to go ignored while politicians respond quickly to the needs or pet causes of their rich benefactors.

While popular and external pressure may have played a role in compelling the federal government to invest in water security for Indigenous communities, its top-down, one-size- fits-all approach may well prove ineffective at addressing the needs of individual First Nations. Democratic input and control from First Nations communities is necessary to ensure that resources are allotted in the most efficient and effective way, yet such grassroots democratic control is impossible on a capitalist basis. In addition, the lack of clean drinking water is only the tip of the iceberg of the significant problems facing First Nations communities in Canada. Even if different levels of government provide the funding and are able to solve this immediate problem, lack of clean drinking water is only a symptom of Indigenous communities offered no future by the capitalist system.

Under socialism, we could democratically plan economic development to ensure that these sorts of disasters caused by private profiteering do not happen, and that the massive profits could instead be easily accessed to ensure quick and efficient solutions to any such problems in the future. Land and resource rights for all First Nations would enable Indigenous communities to democratically control their own fate, working with non-Indigenous workers to ensure that the resources of society go where they are most needed, and that basic rights such as clean drinking water are available to all.

Land and resource rights to all Indigenous people!