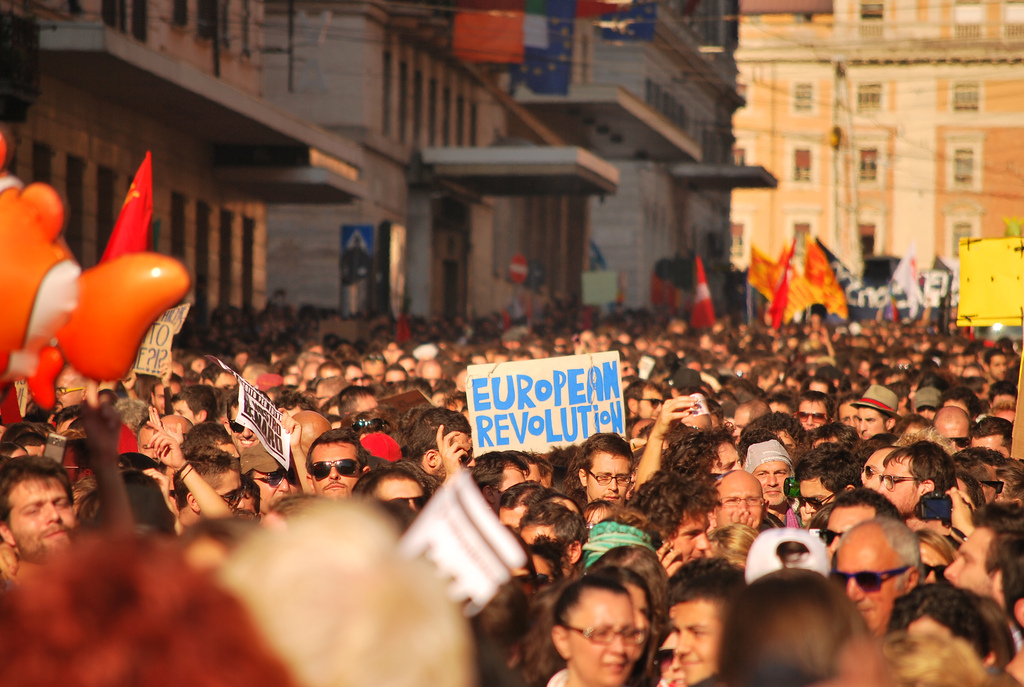 On October 15 Rome saw one of the biggest demonstrations of the last few years in Italy. Up to half a million people flooded the streets of the capital. Not only was this a huge demonstration in terms of the numbers taking part, but even more significantly you could hear the most radical slogans of the last decade. The masses, inspired by Athens, Madrid and New York, chanted “we don’t want to pay the debt”, “No to austerity”, “No to the dictatorship of the ECB (European Central Bank) and the banks”, etc.

There was a widespread feeling that the Letter to the Italian government from Trichet and Draghi (the outgoing and the incoming ECB governors respectively) should be “returned to sender”. That letter, sent at the beginning of August and made public only at the end of September, is an open declaration of war against the Italian working class. In very clear terms it basically ordered the Italian government to implement the same policy as Papandreu’s in Greece.

“The aim – said the letter – should be to achieve a balanced budget in 2013, mainly via expenditure cuts.” They see a need for “the full liberalisation of local public services… through large scale privatization”. There is also a need “to tailor wages and working conditions to firms’ specific needs and increasing their relevance with respect to other layers of negotiations. The June 28 agreement between the main trade unions and the industrial businesses associations moves in this direction.”

In other terms, Draghi and Trichet pushed for the abolition of the national collective bargaining agreement, something that was not fully implemented in the June 28 agreement between the bosses’ confederation and the unions (the CGIL included, the biggest and traditionally “left” trade union confederation). The ECB insisted that Italy should adopt “A thorough review of the rules regulating the hiring and dismissal of employees” Sacconi, the minister of labour, included this point in the new budget voted by the parliament some weeks ago.

The letter ended with pressure for an attack on the public sector workers: “the government should consider significantly reducing the cost of public employees, by strengthening turnover rules and, if necessary, by reducing wages.” The letter also added an attack on women’s pensions (“rapidly aligning the retirement age of women in the private sector to that established for public employees”).

We have quoted at length from this letter because it shows the cynicism and the brutality of the capitalists in this epoch of crisis. This brutality, however, was rejected completely by the demonstrators in Rome on Saturday. What you could feel on October 15 was a generalized questioning of the capitalist system and its institutions. Living conditions in Italy are worsening in a dramatic manner. The rottenness of the system is widely recognized and is illustrated by the Berlusconi government, whose strategy is reduced simply to surviving each parliamentary vote.

The letter of the ECB, on the other hand, was well received by all the political forces in parliament. The reaction of Bersani, the general secretary of the Democratic Party (PD), was to declare that “if Italy had a different government [implying one which included the PD], there would have been no need for the ECB to make so many qualifications. In any case, we will guarantee a balanced budget.”

It is no wonder therefore that the Democratic Party was not present on Saturday’s demonstration. The CGIL also did not officially participate. The leaders of the CGIL, many of whom are members or are very close to the PD, are keen to support any new government that will be formed after a crisis of the present Berlusconi government. However, how any new government would be able to put forward a different policy from the one dictated by the ECB without breaking with the capitalist system is a mystery.

All the most advanced sectors of the working class and of the youth were present on October 15. The metal workers’ union of the CGIL, the FIOM, organized a sizeable sector. The Committees in Defence of the Public Education also organized a sector, where Falcemartello supporters were present with the banner “We want everything back!” (Rivogliamo tutto) produced last year for the October 16 demonstration called by the FIOM. It was a lively sector, with revolutionary and anti-capitalist slogans which connected with many workers and youth.

The mass media have tried to hide this radicalisation of the masses that was clearly evident in Rome by focusing all their attention on the clashes and the riots started by a small sector, linked to the Autonomous Social Centres (centri sociali autonomi), an ultra-left grouping that in no way represents the mass of people protesting. The TV and daily papers all are making a big fuss about the “violence” perpetrated by the “Black bloc”. Anyone watching the TV would think that all that happened on Saturday was a violent clash with the police. It is clear what they are trying to do.

But these same gentlemen (financed by big capital) have no right to talk about violence, when they have been actively supporting the Italian intervention in Libya and Afghanistan, calling them “peace missions”, or when they have consistently kept quiet about the daily massacres on the building sites or on the factory floor. This is the real violence we have todaty, the violence of the capitalist system.

We have criticized heavily those involved in smashing bank or burning car (often cars that are owned by workers) not for moral reasons but because those actions do not help at all to raise the consciousness of the ordinary workers and youth. Moreover, those actions are used as an excuse by the police and the forces of the state to step up repression.

This was seen on Saturday afternoon, when the Police and Carabinieri, using the excuse provided by a small minority of violent individuals, turned and attacked the bulk of the demonstration, cutting it into two sections and preventing the majority of us from getting to the final destination, San Giovanni Square.

In the last few days we have seen, for instance, how the authorities have banned a FIOM demonstration that was scheduled for Friday, October 21, in Rome, against redundancies at FIAT and Fincantieri [shipbuilding company]. The government is talking about a tightening of the legislation concerning demonstrations, pickets, etc. The need to punish the “violent ones” is also shared by many in the so-called parliamentary opposition. Antonio Di Pietro, the leader of Italia dei Valori party (Italy of Values), which is in alliance with the Democratic Party, suggested the reintroduction of the old “Legge Reale”, a law introduced in the 1970s which, among other things, allowed the shooting on sight of every potential criminal. That infamous law led to 652 casualties between 1974 and 1989.

However, no matter what the ruling class tries to do, the class struggle is going to intensify in Italy. There are some very bitter struggles already going on. We have seen this at Fincantieri, where the government is trying to downsize the workforce in a number of shipyards. In Genoa the shipyard has been blocked on several occasions by the workers who have walked out in spontaneous strike action. There is also the case of Irisbus, a Fiat plant near Avellino, a province in southern Italy, where Marchionne (Fiat CEO) is closing the factory and the 700 workers are occupying the plant.

The task is to generalise and connect up these struggles, providing them with a revolutionary programme. Such a task should be taken up by a party like Rifondazione Comunista (PRC), which we are a part of. This is also the idea that we are putting forward in the forthcoming congress of the PRC that is taking place over the coming weeks, where we are presenting our own motion (document number 2) “For a class party”.