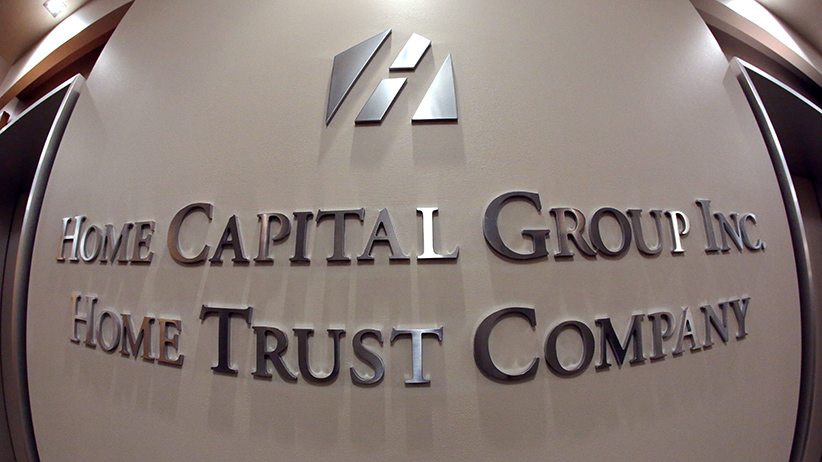 Canada’s largest non-bank mortgage lender is collapsing. Home Capital Group recently experienced a massive 78 per cent plummet in share prices. This was due to its April 26 press release which stated that, to continue operating, it required an expensive, high interest loan (effectively a 22.5 per cent interest loan) from Healthcare of Ontario Pension Plan.

The company needed this lifeline of credit due to a run on its deposits, where more than 90 per cent of funds from its savings accounts had been withdrawn by March 27. This series of withdrawals was accelerated on April 19, when the Ontario Securities Commission (OSC), “accused Home Capital of making misleading statements to investors about its mortgage underwriting business.”

Home Capital denied the legitimacy of these allegations; despite this, confidence in the company is at an all-time low. It has thus been forced by circumstance to sell off a significant proportion of its assets ($2 billion) to large asset managers.

The OSC’s accusations against the company were not without justification. In 2015, the company led an internal investigation and cut ties with 45 brokers who were found to have falsified borrower income and employment information in documents in order to give those borrowers loans.

This kind of fraudulent activity is to be expected since brokers often work on commission and are constantly compelled to maximize short-term gains regardless of long-term perspectives. Not surprisingly, this tendency towards falsification led all the way to the top of the company: in April, three executives were accused by the OSC of misleading and withholding information from shareholders in order to distract them from the findings of the investigation.

This sub-prime mortgage lender’s asset book is valued at around $15 billion, which represents only a single percentage point in Canada’s $1.5 trillion mortgage market. This fact has led certain commentators to argue that, even if Home Capital were to collapse entirely, “the impact on the housing market will be minimal.” This is a naïve and undialectical way to view the situation: Although the flame on a match is tiny and seemingly insignificant, in the right situation it can spark a massive fire. Similarly, it is possible that the crisis in Home Capital can have a domino effect on Canada’s housing market and economy in general, similar to how the collapse of Lehman Brothers triggered the subprime crisis in the US.

This perspective is on the minds of many of the more thoughtful bourgeois commentators and speculators, who continue to ask the question of whether or not this crisis will prove the spark to a Canadian financial meltdown. Indeed, the recent domino effect of Home Capital’s crisis has only further justified their concerns: Equitable Group, described as a “poor-man’s Home Capital Group” by short-seller Marc Cohodes, suffered a 40 per cent loss in share prices ($59.97 on Monday, April 24 to $36.49 Friday, April 28) during the week of the OSC’s allegations against Home Capital, although it has since somewhat recovered to make this a 17 per cent loss ($49.56 as of Friday May 19).

The contagion has spread to other financial organizations, where, when comparing the start of the week precipitating the OSC allegations (Monday April 24) to four weeks later (Friday, May 19), we observe the following losses in share prices: Genworth, a mortgage insurer, fell 8 per cent; Canadian Western Bank fell 10 per cent; even the massive, well-diversified banks of RBC, TD, CIBC and BMO have fallen 3.1 per cent, 5.4 per cent, 5.7 per cent and 6.4 per cent, respectively.

These losses for the large banks were aggravated when Moody’s Investors Service (one of the “big three” credit ratings agencies) downgraded the credit rating of the Big Six Canadian banks. This action was prompted by the Home Capital crisis and concerns about the banks’ “sensitivity to external shocks”, and was further justified by growing concerns about the ever-growing consumer debt and housing prices. Household debt now stands at 167.3 per cent of disposable income, and housing prices continue to rapidly increase, especially around Toronto and Vancouver. Moody’s is essentially saying that it has doubts about the capabilities of these banks to navigate out of a financial crisis, which seems to be on the horizon.

The big banks are growing more and more worried about the housing bubble in Canada, the existence of which is incontestable even according to TD and BMO themselves. Indeed, according to a TD bank report in March, “[t]he growing bubble could soon threaten Canada’s entire economy.” Moody’s continued this dire news in early April (before the OSC report), stating that Canada “is one of four countries at risk of a housing correction”.

The international financial elite are also paying attention to Canada: The Bank for International Settlements argued in March that “Canada is showing early warning signs of financial crisis”. Since then, the late-April Home Capital crisis, Moody’s ratings downgrading, and the subsequent losses in share prices of the big banks have only served to aggravate these growing concerns of the ruling class.

Whether or not a financial crisis will occur in a week, a month, or a year, we cannot say for certain. What we do know is that the bourgeoisie’s top financial experts are becoming more and more concerned about prospects for a financial crisis in Canada, and that the rising housing prices, rising household debt, and fraudulent activities of the shadow banking sector are simply unsustainable in the long term.

The task of Marxists is to be prepared for sharp and sudden changes in the objective situation, and it is not unlikely that a financial crisis would spark a political crisis with a collapse of support for the Liberal government, as we have previously explained. Recent world events suggest that this political crisis would be accompanied by political polarization to the left and right in society. As Marxists, we patiently explain the necessity to break with capitalism in order to once and for all end this system of crisis and instability.