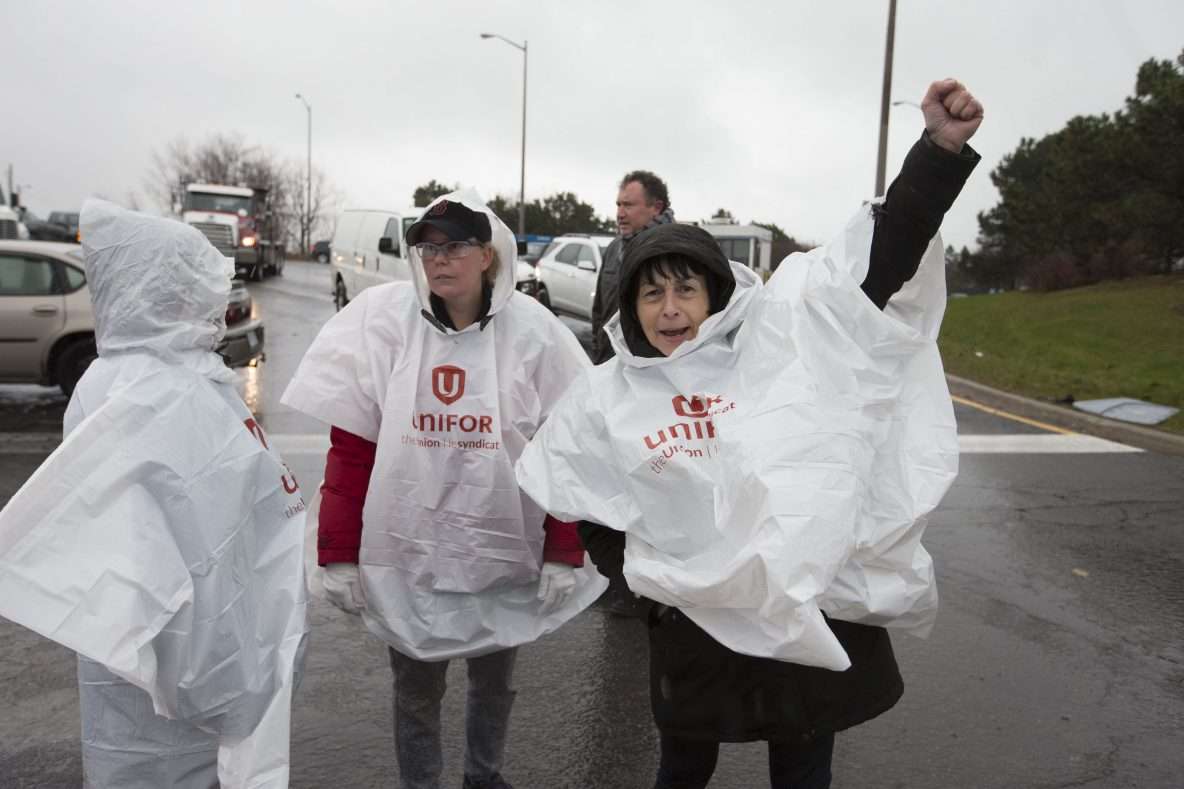 At 9 a.m. on Nov. 26, GM Oshawa workers walked off the job and formed blockades in protest of GM’s announcement to close its plant in the city. GM employs approximately 2,400 people in Oshawa. Another 20,000 work in fields related to auto parts manufacturing that are highly dependent on the GM plant. All told, this is more than 10 per cent of Oshawa’s population. The impact of this closure will be devastating.

The blockades were formed with cars and maintained with picket lines. Community members expressed their support for the workers. Transport truck drivers, likewise, refused to cross the blockade. In that moment, it felt as though the entire city was standing behind the GM workers.

BIlly Kudla, a worker participating in the blockade, told Fightback: “GM is refusing to talk to us, they are adamant they are closing this facility…Workers come from a 100 mile radius of this city, so it’s not going to hurt just us…This is horrible for smaller communities and the workers here.”

Kudla noted there were approximately 20,000 people employed by GM back in 1985 when he first started working there. Those jobs were outsourced to reduce pay and reduce benefits. “The typical thing [is] to divide and conquer, and that’s something [the bosses and CEOs] have done really well here,” he said.

Many of those 20,000 jobs have been outsourced to places like Mexico. There are many reasons for this. For one, Mexican workers make only $2 to $5 per hour, and don’t have the same benefits or rights that Canadian workers have. Mexico also doesn’t have the same environment protection laws that Canada has. The GM bosses are using divide and rule to pit the Canadian workers against the Mexican workers for the sake of making more profit. The workers of the world need to stand up against this injustice. Workers on the blockades understood this, calling for working class unity.

At the press conference, the union hall was packed beyond capacity. Every worker I spoke to said it was the busiest the union hall has ever been. Some of them had been employed for up to 20 years. Emotions were high during the press conference. Workers were in tears, constantly hugging and embracing. Unfortunately, there was no meeting that allowed the workers to raise their concerns with the union leadership, this was simply a chance for the press to ask questions. Luckily, as a representative of Fightback I was able to ask about the possibility of GM plant occupations, workers control, and nationalization. I was contacted and reached out to by a lot of workers, thanking me for saying what I did. After the press conference it was brought up that workers should be uniting with striking postal workers and calling for an Oshawa-wide general strike to defeat back-to-work legislation.

Shamefully, Unifor President Jerry Dias told workers to return to work while he goes to Justin Trudeau to help sort out this situation. This is less than one week after the same government legislated the postal workers back to work. This kind of disgusting legislation shows that Trudeau and the Liberals don’t care about Canadian workers.

After the press conference I had a chance to talk to Cory Weir, a rank-and-file Unfior member who works in the paint shop of GM Oshawa.

Fightback: What do you think about GM’s decision to close down its Oshawa plant?

Fightback: Do you think the union leadership is doing enough to fight this?

Cory: “I would like to see us take more direct action… I don’t think government intervention is the way forward, I think that we have to hit GM hard, where it matters, and that’s in their balance book.”

Fightback: What do you think of them telling workers to go back to work after walking off the job today?

Fightback: So you think something like a general strike would be a good idea?

Cory: “Of course… when taking the avenues of government action inevitably fails, which it inevitably does, then we’ll be in a position for them to take some more drastic action seriously.” “I think right now actually, what’s going on with the postal workers, CUPW being legislated back to work now is a really golden moment for us to work with them and build more [of] a movement surrounding this… There are lot of opportunities if we’re willing to seize them.”

Fightback: Like a strike wave of solidarity among all workers?

Rebecca Keetch, another rank-and-file worker, explained to me that there are a group of workers in Oshawa known as “GM Gypsies”. These are workers who have been shuttled from plant to plant as one after another closes down. Keetch explained:

“As GM has closed plants around Ontario and Quebec workers have been shuttled from one plant to another. Scarborough Van plant closed, Sainte-Thérèse, Windsor lost workers, St. Catherine’s lost workers, London too… so people were relocating from these cities to keep their pensions and keep their benefits. It’s worth fighting for, good jobs are worth fighting for… A lot of the new hires, or people working at the supplier plants, are people who have been displaced from auto jobs already. So if they were working at one place and it lost its contract, then they get hired at another place, usually for lower wages.”

Vic McCullough, a Unifor 222 retiree, explained how GM pulling out of Oshawa is going to affect pensions:

“If GM Canada shuts down operations we’re going to be under a wind-up legislation. If that would’ve happened in 2008, I would have lost 1/3 of my pension after working 30 years in the plant. Only being retired for one year, that would’ve been devastating. I had full benefit coverage as far as drugs and medications, and now I have to pay 20 per cent. I haven’t had an increase in 11 years and 20 years from now, it’s already been reduced by 20 per cent Twenty years from now I’m looking at only half my buying power from when I retired. It’s going to be hard. The price of everything is going up and when your benefits, your pension, stays the same, it’s not long before you’re in a precarious situation.”

In the last decade GM Oshawa has already shed at least 7,000 jobs. As Rebecca Keetch explained, “If you go back to just before the last truck plant closed, there had to be approximately 10,000 people active in GM and that’s not including the spinoff jobs. Our community has already experienced significant auto industry impact for the last decade, so this is going to be just another hit.”

She went on to explain:

“Concessionary bargaining hasn’t worked. If we look at the auto industry in Canada, we have been bleeding auto jobs for two decades now. You can see concessionary bargaining hasn’t worked. In the Oshawa assembly plant alone we’ve lost 85 per cent of our workers. And that is giving up significant gains, giving up wages, accepting two-tier pensions. It hasn’t provided any stability, it hasn’t provided us a way forward. Now we’re looking at a plant closure after bending over backwards to give them what they want”.

The capitalists and their friends in the Liberal Party do not care about the working class, and workers in Oshawa are no exception. All throughout the day, the GM workers made it clear  that they are not going to take this attack lying down. They are prepared to fight. Unfortunately, the union leadership has not been as brave. At some point, workers will need to step up their fight and work towards a plant occupation and workers’ control. This is the only way to maintain good union jobs in the face of the corporate onslaught. This fight has only just begun.

The workers, united, will never be defeated!