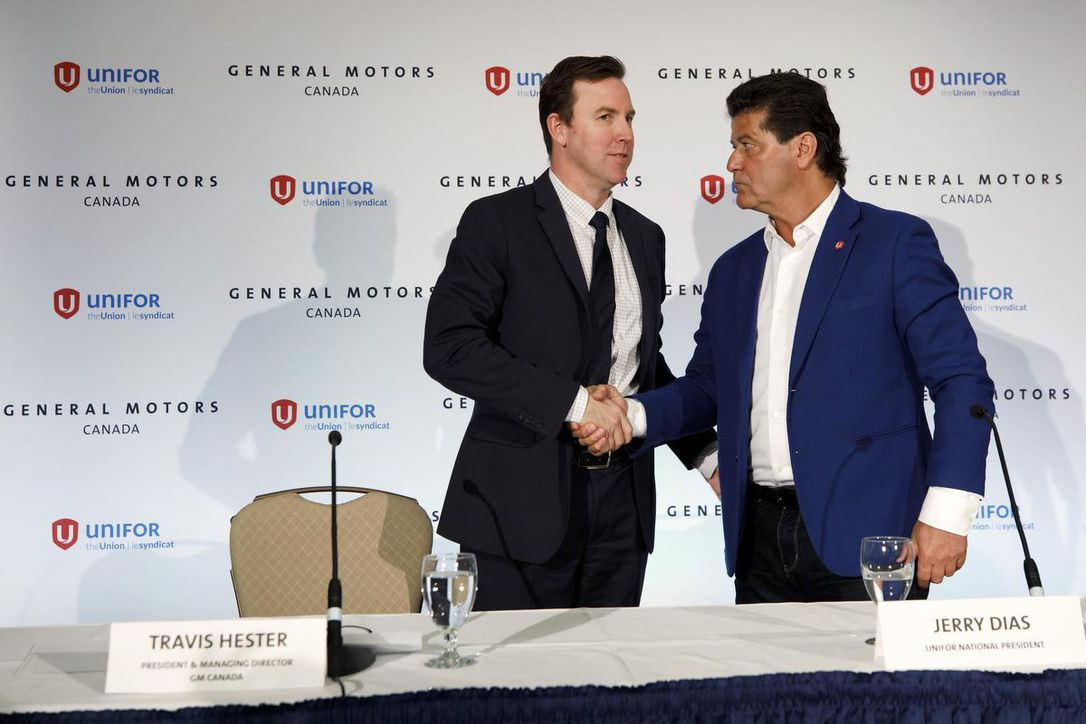 On May 8, GM and Unifor jointly announced the loss of 2,300 out of the 2,600 unionized jobs at the Oshawa Assembly Plant. After five months of negotiating, GM will not reverse its decision to end vehicle manufacturing at the plant by the end of 2019, promising only a $170 million investment after that. This is a slap in the face to 2,600 skilled unionized workers who produced billions in profits for the company over the years.

The 300 remaining jobs will be transferred to stamping, sub-assembly and autonomous vehicle testing and other miscellaneous work. GM promised “Job Action” centres and money for college courses to workers now finding themselves unemployed, competing with the tens of thousands of unemployed and precarious workers in Durham Region—including many whose current jobs depend on the manufacturing plant staying open.

GM and Unifor also promised “significant severance enhancements and incentives for those nearing retirement.” However, the increased severance package offered by GM is hardly consolation for those who desperately wanted to save their jobs, and may not even be enough for those who qualify. In effect, GM is attempting to buy them off.

GM Canada President Travis Hester claims the transformed plant will have the potential to grow and create more jobs as the facility attracts new customers. What this really means is that GM will now have greater opportunity to hire non-unionized and precarious workers, should they choose to expand production at all. After shifting assembly to Mexico to exploit workers making poverty wages, they are now paving the way for those same conditions in Oshawa.

Immediately following the announcement, Dias called the agreement with GM “innovative” and “a solid business plan for the future” on Twitter. He then made the claim that U.S. GM plants in a similar position to Oshawa Assembly “came back” after being “mothballed”.

Believing GM’s promises of bringing back jobs would be naive. In 2016, Dias signed an agreement with GM for a production guarantee in Oshawa. At the time, he was quoted as saying: “We have locked in the vehicles in the collective agreement. They are not going anywhere,” vowing the assembly plant would not close. GM has long since proven their promises aren’t worth the paper they are written on.

A recent piece at durhamregion.com captured the reaction of workers to the announcement:

“I’m going to repeat what Jerry Dias said, it’s great they’re giving us something,” said Aaron Cochrane, of Port Perry. “But where are the majority of the people going to go? Not everyone can pick up their families and move.”

‘Oshawa resident Jason Lane said he was a third generation GM worker who has worked at the plant for about seven years. He doesn’t believe he’ll be one of the 300 people to stay on at the plant.’ “I think it’s good for them, but for the lower seniority it doesn’t work at all.”

“It sucks really,” said Braeden, a summer employee who decline to provide his last name. “I have family that work here, it’s a struggle. To be swept under the rug with only 300 jobs, it sucks.”

Unifor Local 222 executive board member Cory Weir had some choice words about the role of Unifor’s national leadership:

GM is running away with billions in government handouts and abandoning thousands of skilled, productive unionized workers. The new agreement does not change this fact.

In closing his op-ed in the Toronto Star, Dias said: “Things change. Companies evolve. With this week’s announcement, Oshawa is ideally placed to be part of that evolution. Now, let’s start building towards that future.” But on the day of the GM closure announcement on November 26, 2018, Dias said: “They’re not closing our damn plant without one hell of a fight.” What came of those fighting words? And what plans to fight does Dias have for the future? Oshawa GM workers have a right to know.

Nationalization the only way

…that unless GM guarantees to maintain the current number of jobs in Oshawa, it should be nationalized without compensation and placed under democratic workers’ and community control in order to save productive union jobs and benefit the city of Oshawa and region of Durham.

The adoption of this resolution, to be sure, was a huge victory, and reflected the lengths to which workers will go to defend their livelihoods. However, words mean little unless they are put into practice. Apart from workers’ management, no other option now exists for saving Oshawa GM.

Until now, Unifor has tried diplomacy, boycotts and all manner of idle threats to scare management and save the 2,600 jobs. As we warned, none of these approaches have worked. The time for half-measures is now over.