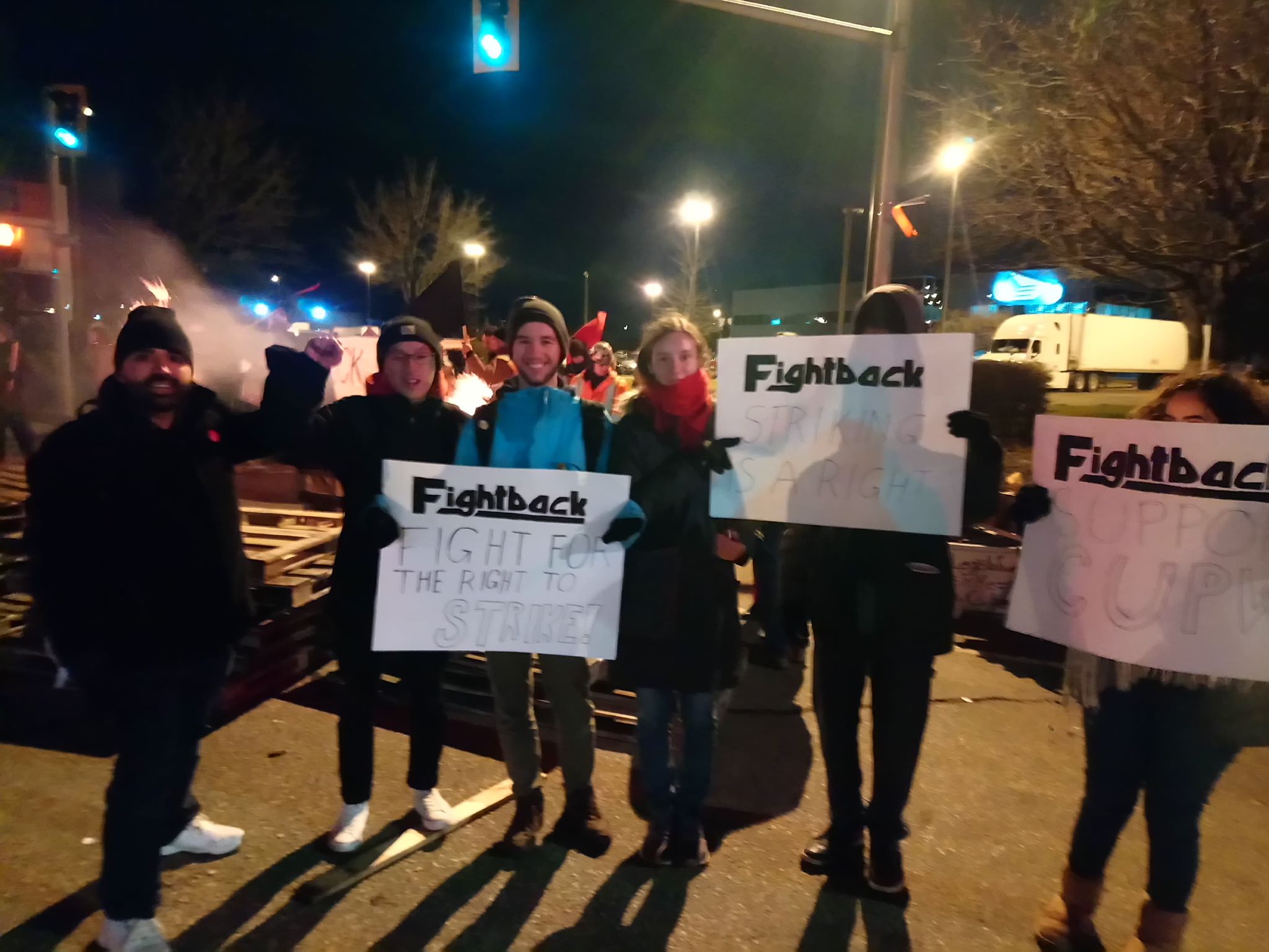 On the cold night of Nov. 28, the city of Hamilton stood in solidarity with CUPW against back-to-work legislation. A picket line was set up in front of the Canada Post processing plant in the Hamilton neighborhood of Stoney Creek. The picket lines were made up of different community, labour, and political groups, as well as individuals from the city. This action was spontaneously organized by people in the community in response to the use of undemocratic back-to-work legislation. Six activists from Fightback Hamilton joined the line to support CUPW.

The picket was set up at 5 p.m., with the initial goal of keeping it going for three or four hours. But no one knew how many people would show up. Over 100 people came together at the start with more people constantly trickling in. With that many people, the picket was extended to last until midnight.

Keeping a picket going for seven hours is not an easy task. Keeping it going past midnight would not be feasible with the resources available to members of the community. Only the mass organizations can really sustain a strike for an extended period of time.

Despite these challenges, everyone put together what little resources they had to be shared. We pooled together barrels and wood for fire, as well as coffee, food, and water. Even a boom box playing Billy Bragg and other labour artists was provided. From the minute our banners went up, passing cars and trucks would honk in solidarity. The support for postal workers extended well beyond the picket line.

The picket itself was a sight to see. Between two burning barrels to keep people warm was a giant banner reading “Fuck Justin Trudeau,” alongside a variety of political and union banners and flags. The political messages were focused on the right to strike, support for CUPW, and the fightback against the Liberal attacks. There was clear anger about the use of undemocratic back-to-work legislation, but what really bound the group together was their support for CUPW.

The picketers let workers in and out so that they would not be held up by this action. This was at its core a solidarity action by the Hamilton community in support of frontline workers. When the picketers explained to workers entering what was happening, the workers instantly had smiles on their faces. Many shook our hands, took pictures, and honked in celebration. While this was very uplifting, the workers’ participation was limited to these types of actions. Fightback comrades handed out flyers opposing back-to-work legislation to those who walked past the picket.

The workers could not actively join in the blockade. As the strike continued, some workers came out to take pictures and cheer from a distance, or would say thanks as they walked past the picket. The postal workers had no choice but to be passive in response to the community picket. This is the limitation of these types of community actions. There is no doubt that, had they been given the direction by the union leadership, these workers would have joined the picket. That would have transformed the entire situation.

The bosses also took notice of the response from the workers. To prevent fraternization between workers and picketers, the bosses started keeping an eye on the picket at 7:30 p.m. At around 8:00 p.m. the cops showed up. Their first attempt to shut down the picket was to call the fire department to extinguish the barrels containing fires for warmth. The fire department then explained to the picket that we were not allowed to burn on the street, but burning the fires on the sidewalks was okay. In response, a picketer said we would let the fire burn out as nobody had the equipment to move a burning metal barrel. The firefighters agreed to this, but the police were clearly not okay with it. They tried to convince the fire department to put it out using an extinguisher, which would prevent the barrel from holding a fire until it was cleaned. The fire department in response used their firefighters gloves to move it to the sidewalk for us and left, with many of us expressing gratitude for their not shutting down the fires.

When the plant’s head management tried to leave, we held them back for 20 minutes to demand that they negotiate fairly with CUPW. The police and the plant bosses made repeated attempts to talk to “the leader” of the group in order to shut down the picket. As mentioned before, this was a spontaneous demonstration of the community with no official “leader”. As the night progressed, police continued to monitor us from a distance. But ultimately this was a peaceful demonstration and no arrests were made, despite Canada Post’s claim that this was an illegal act. 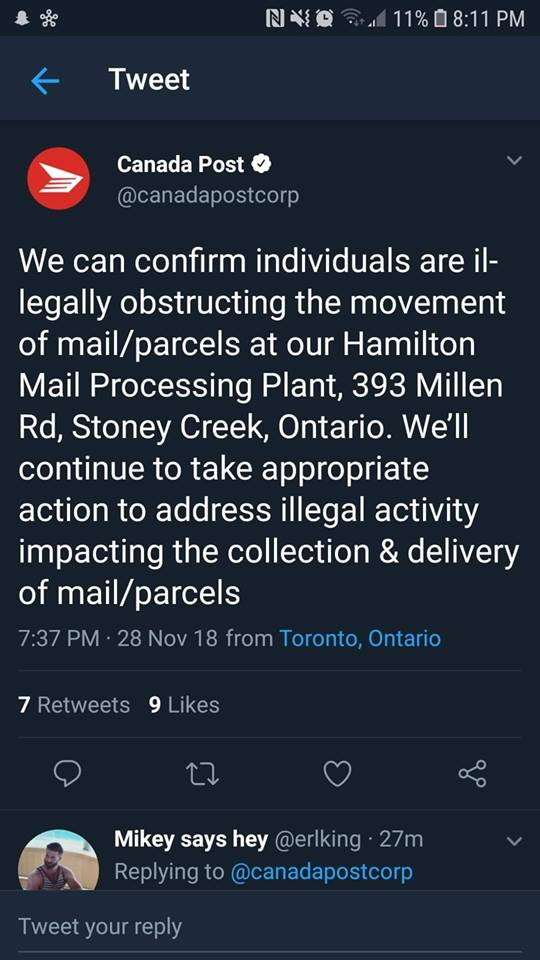 When Fightback comrades left the picket, a postal worker went up to the group saying, “Thank you so much for doing this. We were so defeated after the legislation dropped. We have all been sharing pictures of the [solidarity actions] on Facebook across the country. It’s amazing. We feel like we can fight.” The message of the picket was successful and the workers took it to heart. This just goes to show that CUPW’s rank and file is not yet defeated, and the mood to fight is there. It just needs a leadership that is willing to call the workers out.

Solidarity pickets are no doubt brave, but these actions cannot be sustained for more than a day. After the protest, Canada Post said it will be be looking into taking action against those who “illegally” blocked the plant. This is likely just blustering in the face of being shown that legislation can’t stop the labour movement. However, we must be prepared to fight any action against any individual who was on the picket. The picket was an entirely peaceful protest and the claims of Canada Post are entirely false.

The Hamilton picket shows that the community is willing to stand up and fight with CUPW in whatever actions they choose to go forward with. However, community pickets like this can’t be sustained indefinitely. If CUPW were to defy the back-to-work legislation, the solidarity from other workers would be immense. The pickets in Hamilton, Vancouver, and Windsor show that there is a deep well of support for CUPW. If the leadership is willing to fight, the community would be there every step of the way to support the defiance of unjust laws. The British Columbia Government and Service Employees’ Union has even pledged $3 million to support CUPW, and other unions are making similar commitments. Ultimately, a union will have to defy back-to-work legislation or these laws will continue to be passed and hard-fought workers’ rights will continue to be trampled on.