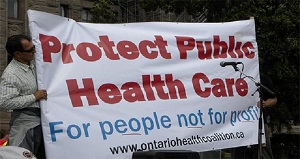 On April 18, Bill 74 passed in the Ontario legislature. This bill will dissolve existing local health councils in favour of a central “super-agency”. This super-agency will consist of 15 board members, appointed by the Ford administration. These board members will have sweeping abilities to integrate or dissolve health-care services across the province, deciding whether they are delivered to patients by public or private providers. In other words, Doug Ford’s friends running this new agency will have the ability to implement massive privatization across the health-care system.

The NDP first leaked a draft of the bill of the on Jan. 30. The proposed legislation was immediately met with widespread disapproval. Shortly after, Ford’s health minister Christine Elliott lied through her teeth to reassure the public. Elliott stated that nothing was final and promised that the government was conducting “public consultations” on the bill. These consultations were clearly a sham, however, given that the bill was passed despite massive public opposition. The final version of the bill is only slightly different from the original, opting to remove the word “super-agencies,” and changing its title to “The People’s Healthcare Act”. Despite this, the content of the bill is fundamentally the same. The Orwellian doublespeak has no one fooled.

There is no denying that Ontario’s health-care system is bursting at the seams. Ontario’s infrastructure is no match for its growing and aging population. The Ford administration has used this as a pretext to introduce their privatization bill. When speaking on the new bill, Elliott stated: “We have over 32,000 waiting for a long-term care space…Right now, every day, there are over 1,200 people receiving health care in hallways in our hospitals. That’s not acceptable to anybody.” Elliott is not wrong, except in suggesting that she or her government actually cares.

The cut to hospital beds is only one among many. Ford’s government has also cut $335 million dollars in planned spending for mental health, cancelled OHIP+ pharmaceutical coverage for seniors and children, slashed autism funding, and canceled all planned overdose prevention sites.

During his campaign, Ford vowed to cut health-care spending without reducing services. This has proven to be a lie. According to the FAO, Ontario’s financial watchdog, the Ford administration has set the 2020-2021 budget for health-care spending at $65.3 billion, which is $5 billion short of what is needed to maintain the status quo. This means that even more services will need to be cut to make up for the shortfall.

Ford’s callous cuts to health care should come as no surprise. According to the Toronto Star, Ford put proponents of private health care in positions of authority long before Bill 74 saw the light of day. He appointed Rueben Devlin, the president of the failed private-public Humber River Hospital, to head a task force on health-care reform. Charles Lammam, of the right-wing Fraser Institute, was made director of policy in the health minister’s office. He also appointed former B.C. premier Gordon Campbell, who oversaw healthcare privatization in B.C., to lead an inquiry into Ontario’s finances.

What does privatization mean?

The government will continue to cut funding to public health care, which will result in holes in health-care services and longer wait times. Private profiteers will open separate clinics with government help to fill those holes for a pretty penny. The Ford government and his pro-privatization allies maintain that this would make things more efficient. We don’t have to look far to see that the opposite is true. According to a report from the auditor general in 2015, hospitals and other projects built through public-private partnerships cost Ontario $8 billion more than if they had been done exclusively by the public sector. This is a major inefficiency. To provide some context, universal dental care would only cost $38 million a year.

Privatization has had even more miserable results in British Columbia. Former B.C. premier Campbell, now working for Ford, made a very big mess in B.C. with his own privatization scheme. Thanks to Campbell, BC currently has a two-tier health-care system: one for the rich, one for the poor. Due to years of funding cuts to public health care, there is a historically long wait list for surgery: 80,000 patients as of last April. Poor and working class citizens have to wait their turn, while the rich are able to jump the queue by paying private clinics thousands of dollars for an operation. Each year five to 10 per cent of surgeries (60,000), $15 million worth, are done in private facilities. Privatization in B.C. has ultimately pushed down the public system’s quality and put working people into inferior care. If Ford’s agenda is allowed to continue, Ontario will find itself in a similar state in the coming years.

How to fight back

Under the Ford regime, all public services are on the chopping block. His administration has already cut pharmacare, OSAP, and is looking into cutting full-time kindergarten. The undermining of publicly provided health services is part of Ford’s overall program of austerity and cuts to services that working class people rely on. Though Ford promised he wouldn’t cut health-care services during the campaign, this was clearly a lie. Under this government “for the people”, people are going to suffer. Nothing is safe in Ford’s Ontario.

In response to Bill 74, several major unions representing health-care workers in Ontario including Unifor, CUPE, OPSEU, and ONA held a press conference on April 23 and collectively committed to fight back against Doug Ford’s privatization agenda. These unions in conjunction with the Ontario Health Coalition have organized a rally against health-care privatization on April 30 at Queen’s Park. This a good initiative, but the fight can’t stop here. The major unions should use rallies such as this one as an opportunity to educate, energize, and mobilize their members toward escalating actions including strikes against the cuts, leading up to a general strike of all Ontario workers. Ford may have a majority in the legislative assembly, but the working class has the majority in the streets. A powerful strike movement can not only stop Ford’s cuts, but bring down his rotten government altogether.